As just explained, when you create a class, you are creating a new data type. You can use this type to declare objects of that type. However, obtaining objects of a class is a two-step process.

As just explained, when you create a class, you are creating a new data type. You can use this type to declare objects of that type. However, obtaining objects of a class is a two-step process. First, you must declare a variable of the class type. This variable does not define an object.

Instead, it is simply a variable that can refer to an object. Second, you must acquire an actual, physical copy of the object and assign it to that variable. You can do this using the new operator. The new operator dynamically allocates (that is, allocates at run time) memory for an object and returns a reference to it. This reference is, more or less, the address in memory of the object allocated by new. This reference is then stored in the variable. Thus, in Java, all class objects must be dynamically allocated. Let’s look at the details of this procedure.

In the preceding sample programs, a line similar to the following is used to declare an object of type Box:

This statement combines the two steps just described. It can be rewritten like this to show each step more clearly:

The first line declares mybox as a reference to an object of type Box. At this point, mybox does not yet refer to an actual object. The next line allocates an object and assigns a reference to it to mybox. After the second line executes, you can use mybox as if it were a Box object. But in reality, mybox simply holds, in essence, the memory address of the actual Box object. The effect of these two lines of code is depicted in Figure 6-1.

A Closer Look at new

As just explained, the new operator dynamically allocates memory for an object. It has this general form: 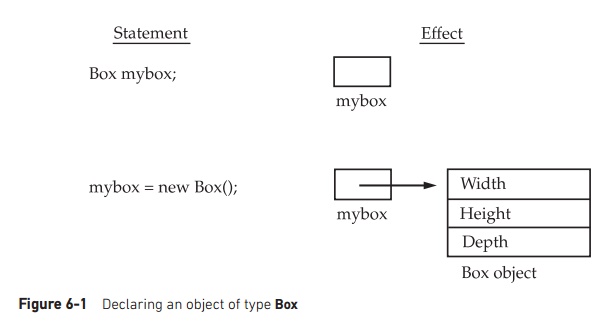 It is important to understand that new allocates memory for an object during run time. The advantage of this approach is that your program can create as many or as few objects as it needs during the execution of your program. However, since memory is finite, it is possible that new will not be able to allocate memory for an object because insufficient memory exists. If this happens, a run-time exception will occur. (You will learn how to handle exceptions in Chapter 10.) For the sample programs in this book, you won’t need to worry about running out of memory, but you will need to consider this possibility in real-world programs that you write.

Let’s once again review the distinction between a class and an object. A class creates a new data type that can be used to create objects. That is, a class creates a logical framework that defines the relationship between its members. When you declare an object of a class, you are creating an instance of that class. Thus, a class is a logical construct. An object has physical reality. (That is, an object occupies space in memory.) It is important to keep this distinction clearly in mind.