One of the most important tasks when working with SQL is to generate Queries and retrieve data.

·        Table-name is the name of the table from which the information is retrieved.

·        Column-list includes one or more columns from which data is retrieved.

For example to view only admission number and name of students from the Student table the command is given as follows:\

If the Student table has the following data: 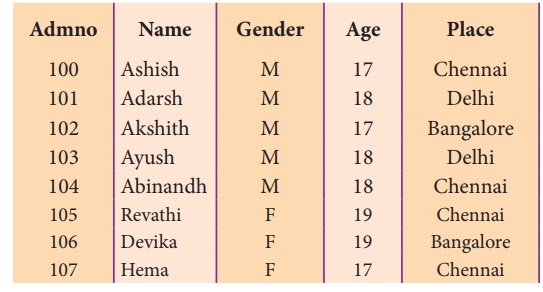 The above SELECT command will display the following data: 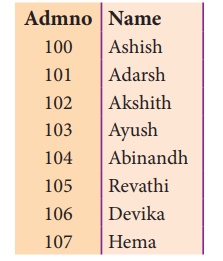 To view all the fields and rows of the table the SELECT command can be given as SELECT * FROM STUDENT;

The DISTINCT keyword is used along with the SELECT command to eliminate duplicate rows in the table. This helps to eliminate redundant data. For Example:

Will display the following data as follows :

In the above output you can see, there would be no duplicate rows in the place field. When the keyword DISTINCT is used, only one NULL value is returned, even if more NULL values occur.

The ALL keyword retains duplicate rows. It will display every row of the table without considering duplicate entries.

SELECT ALL Place FROM Student;

The above command will display all values of place field from every row of the table without considering the duplicate entries.

The WHERE clause in the SELECT command specifies the criteria for getting the desired result. The general form of SELECT command with WHERE Clause is:

For example to display the students admission number and name of only those students who belong to Chennai, the SELECT command is used in the following way : 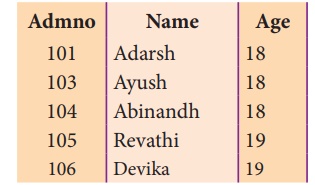 The relational operators like =, <, <=, >, >=, <> can be used to compare two values in the SELECT command used with WHERE clause. The logical operaors OR, AND and NOT can also be used to connect search conditions in the WHERE clause. For example :

The SELECT command can also be used in the following ways:

(iii) BETWEEN and NOT BETWEEN Keywords

The BETWEEN keyword defines a range of values the record must fall into to make the condition true. The range may include an upper value and a lower value between which the criteria must fall into.

SELECT Admno, Name, Age, Gender FROM Student WHERE Age BETWEEN 18 AND 19;

The NOT BETWEEN is reverse of the BETWEEN operator where the records not satisfying the condition are displayed.

SELECT Admno, Name, Age FROM Student WHERE Age NOT BETWEEN 18 AND 19;

The IN keyword is used to specify a list of values which must be matched with the record values. In other words it is used to compare a column with more than one value. It is similar to an OR condition. 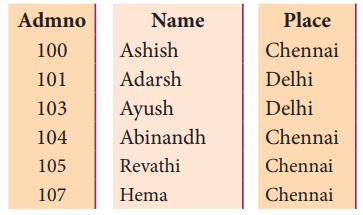 The NOT IN keyword displays only those records that do not match in the list.

SELECT Admno, Name, Place FROM Student WHERE Place NOT IN (“Chennai”, “Delhi”);

will display students only from places other than “Chennai” and “Delhi”.

The NULL value in a field can be searched in a table using the IS NULL in the WHERE clause. For example to list all the students whose Age contains no value, the command is used as:

SELECT * FROM Student WHERE Age IS NULL;

The ORDER BY clause in SQL is used to sort the data in either ascending or descending based on one or more columns.

1. By default ORDER BY sorts the data in ascending order.

The ORDER BY clause is used as :

To display the students in alphabetical order of their names, the command is used as

SELECT * FROM Student ORDER BY Name;

The above student table is arranged as follows : 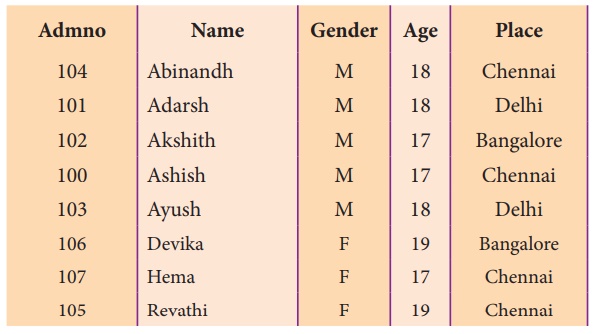 The WHERE clause is used to filter the records. It helps to extract only those records which satisfy a given condition. For example in the student table, to display the list of students of age18 and above in alphabetical order of their names, the command is given as below:

SELECT * FROM Student WHERE Age>=18 ORDER BY Name;

To display the list of students in the descending order of names of those students of age 18 and above the command is given as :

SELECT * FROM Student WHERE Age>=18 ORDER BY Name DESC;

The GROUP BY clause is used with the SELECT statement to group the students on rows or columns having identical values or divide the table in to groups. For example to know the number of male students or female students of a class, the GROUP BY clause may be used. It is mostly used in conjunction with aggregate functions to produce summary reports from the database.

The syntax for the GROUP BY clause is

To apply the above command on the student table :

The following command will give the below given result:

The point to be noted is that only two results have been returned. This is because we only have two gender types ‘Male’ and ‘Female’. The GROUP BY clause grouped all the ‘M’ students together and returned only a single row for it. It did the same with the ‘F’ students.

For example to count the number of male and female students in the student table, the following command is given :

The GROUP BY applies the aggregate functions independently to a series of groups that are defined by having a field value in common. The output of the above SELECT statement gives a count of the number of Male and Female students.

The HAVING clause can be used along with GROUP BY clause in the SELECT statement to place condition on groups and can include aggregate functions on them. For example to count the number of Male and Female students belonging to Chennai .

The above output shows the number of Male and Female students in Chennai from the table student.