The bulk of this book examines technical approaches to the detection, prevention, and recovery from computer and network attacks. One other tool is the deterrent factor of law enforcement. Many types of computer attacks can be considered crimes and, as such, carry criminal sanctions. This section begins with a classification of types of computer crime and then looks at some of the unique law-enforcement challenges of dealing with computer crime.

Computer crime, or cybercrime, is a term used broadly to describe criminal activity in which computers or computer networks are a tool, a target, or a place of criminal activity.1 These categories are not exclusive, and many activities can be character- ized as falling in one or more categories. The term cybercrime has a connotation of the use of networks specifically, whereas computer crime may or may not involve networks.

The U.S. Department of Justice [DOJ00] categorizes computer crime based on the role that the computer plays in the criminal activity, as follows:

•                 Computers as communications tools: Many of the crimes falling within this category are simply traditional crimes that are committed online. Examples include the illegal sale of prescription drugs, controlled substances, alcohol, and guns; fraud; gambling; and child pornography.

A more specific list of crimes, shown in Table 23.1, is defined in the interna- tional Convention on Cybercrime.2 This is a useful list because it represents an international consensus on what constitutes computer crime, or cybercrime, and what crimes are considered important.

Yet another categorization is used in the CERT 2006 annual E-crime Survey, the results of which are shown in Table 23.2. The figures in the second column indicate the percentage of respondents who report at least one incident in the corresponding row category. Entries in the remaining three columns indicate the percentage of respondents who reported a given source for an attack.3

The deterrent effect of law enforcement on computer and network attacks correlates with the success rate of criminal arrest and prosecution. The nature of cybercrime is such that consistent success is extraordinarily difficult. To see this, consider what [KSHE06] refers to as the vicious cycle of cybercrime, involving law enforcement agencies, cybercriminals, and cybercrime victims (Figure 23.1).

For law enforcement agencies, cybercrime presents some unique difficulties. Proper investigation requires a fairly sophisticated grasp of the technology. Although some agencies, particularly larger agencies, are catching up in this area, many jurisdictions lack investigators knowledgeable and experienced in dealing with this kind of crime. Lack of resources represents another handicap. Some cyber- crime investigations require considerable computer processing power, communica- tions capacity, and storage capacity, which may be beyond the budget of individual jurisdictions. The global nature of cybercrime is an additional obstacle: Many crimes will involve perpetrators who are remote from the target system, in another juris- diction or even another country. A lack of collaboration and cooperation with remote law enforcement agencies can greatly hinder an investigation. Initiatives such as the international Convention on Cybercrime are a promising sign. The Convention at least introduces a common terminology for crimes and a framework for harmonizing laws globally.

Table 23.1 Cybercrimes Cited in the Convention on Cybercrime

The access to the whole or any part of a computer system without right.

The damaging, deletion, deterioration, alteration or suppression of computer data without right.

The serious hindering without right of the functioning of a computer system by inputting, transmitting, damaging, deleting, deteriorating, altering or suppressing computer data.

b.                       The possession of an item referred to in paragraphs a.i or ii above, with intent that it be used for the purpose of committing any of the offences established in the above Articles 2 through 5. A Party may require by law that a number of such items be possessed before criminal liability attaches.

The input, alteration, deletion, or suppression of computer data, resulting in inauthentic data with the intent that it be considered or acted upon for legal purposes as if it were authentic, regardless whether or not the data is directly readable and intelligible.

The causing of a loss of property to another person by:

b.                       Any interference with the functioning of a computer system, with fraudulent or dishonest intent of procuring, without right, an economic benefit for oneself or for another person.

Articles 2 through 10 of the present Convention with intent that such offence be committed. An attempt to commit any of the offences established in accordance with Articles 3 through 5, 7, 8, and 9.1.a and c. of this Convention. 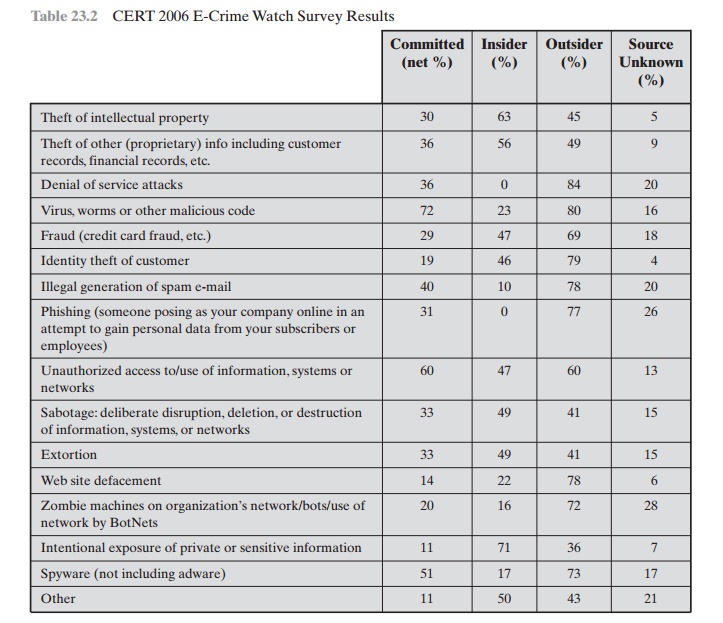 The relative lack of success in bringing cybercriminals to justice has led to an increase in their numbers, boldness, and the global scale of their operations.   It is difficult to profile cybercriminals in the way that is often done with other types of repeat offenders. The cybercriminal tends to be young and very computer-savvy, but the range of behavioral characteristics is wide. Further, there exist no cybercriminal databases that can point investigators to likely suspects.

The success of cybercriminals, and the relative lack of success of law enforce- ment, influence the behavior of cybercrime victims. As with law enforcement, many organizations that may be the target of attack have not invested sufficiently    in technical, physical, and human-factor resources  to  prevent  attacks.  Reporting rates tend to be low because of a lack of confidence in law enforcement, a concern about  corporate  reputation, and  a  concern  about  civil  liability. The  low reporting 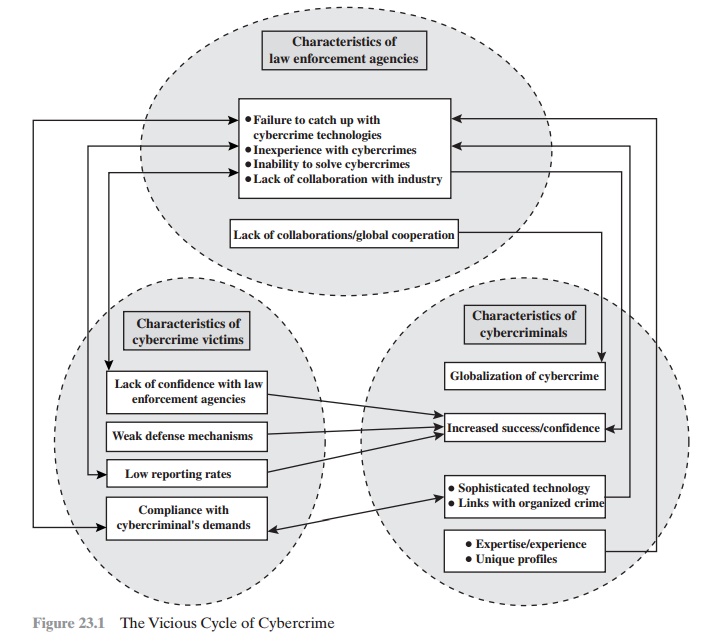 Executive management and security administrators need to look upon law enforce- ment as another resource and tool, alongside technical, physical, and human-factor resources. The successful use of law enforcement depends much more on people skills than technical skills. Management needs to understand the criminal investiga- tion process, the inputs that investigators need, and the ways in which the victim can contribute positively to the investigation.