Laminaria japonica, known as ‘Kombu’, is animportant edible seaweed and a source of alginic acid in Japan.

Laminaria japonica, known as ‘Kombu’, is animportant edible seaweed and a source of alginic acid in Japan. China was a major importer of Japanese and Korean Laminaria until about the 1930s, when a local source of the alga was discovered, and in recent years its cultivation has expanded very rapidily.

The earlier system of sowing spore-bearing rocks into the sea has been partially replaced by the more intensive techniques of spore collection and on-growing. In late autumn, special collectors made of split bamboo in the form of short ladders are suspended from floating rafts. The zygotes which attach themselves to the collectors develop into young sporophytes by about January. Temperature and light intensity affect the formation and release of spores in nature and, by controlling these factors, it is possible to propagate the species indoors with consistent results (fig. 29.4). Temperatures between 10 and 15°C have been found to be favourable for the maturation of sporophytes and formation of zoospores. At temperaturesabove 20°C, the production of new sori and release of zoospores cease. Temperatures of 10–20°C have been found to be suitable for the germination of spores and the formation of gametophytes. Periodic darkness is necessary for release of eggs and sperm and successful fertilization, but illumination is required for the development of the gametophytes and the growth of the sporophytes. So periods of illumination of 500–4000m candelas, alternated with periods of darkness, have been recommended in indoor propagation facilities. 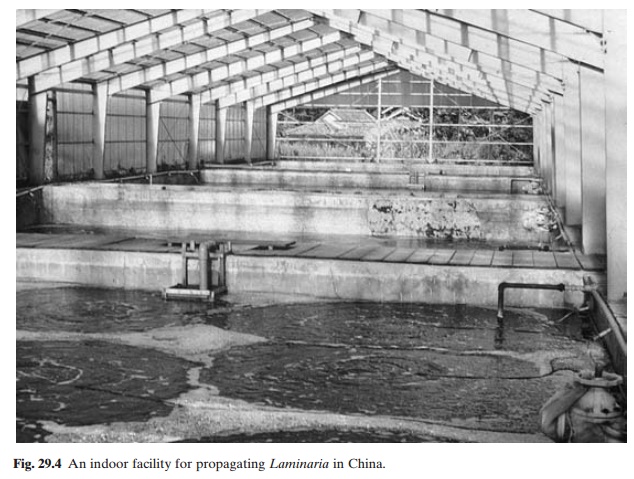 Major increases in Laminaria production in China are attributable to the use of the raft systems. Spores attached to ropes are suspended from rafts either vertically or in a cradle-like device made of bamboo, hung between two parallel rows of the bamboo rafts. The main advantage of this arrangement is that the plants grow upwards and therefore have better exposure to sunlight. Immersion of the sporophytes in a fertilizer solution, such as ammonium nitrate, before they are attached to the rafts promotes an early start to rapid growth. The use of spores produced in summer under controlled conditions and cultured in mid-autumn when temperatures fall below 20°C has greatly improved growth rates and reduced fouling. The yield of a basket raft is reported to be only about 1kg per kg fertilizer used, whereas the bamboo rafts yield over 3kg per kg fertilizer. However, the quality of the basket raft plants is said to be higher.

Predation and fouling as well as rot diseases have been oberved, but no practical methods of prevention are known at present. Bottom culture of Laminaria on stones and ropes is still practised in China, but the zoospores are first attached to the substrates before being deposited on the sea bed.

Laminaria japonica grows under favourableconditions to lengths of over 3m in four to five months (fig. 29.5). This size is suitable for harvesting, although the plants can grow up to 6m on rafts. While harvesting of raft-grown Laminaria 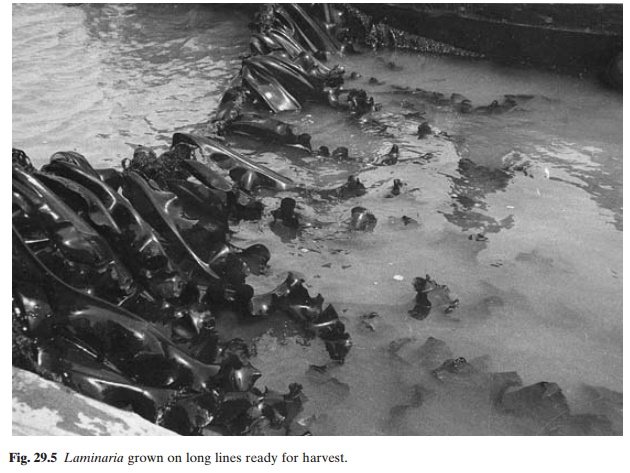 is performed from boats, efficient harvesting in bottom cultures is possible only by diving. Periodic harvesting of the distal one-third of the sporophytes has been found to facilitate better growth and higher yields. The farmer is especially interested in the dry weight rather than the wet weight of the harvested plants, and the dry weight is reported to increase at water temperatures of 20–21.5°C, even when the wet weight shows a decline (fig. 29.6). The reported yield of Laminaria in bottom culture is about 2.4 tons/ha. A single bamboo raft can culture about 72000–134000 plants per ha. 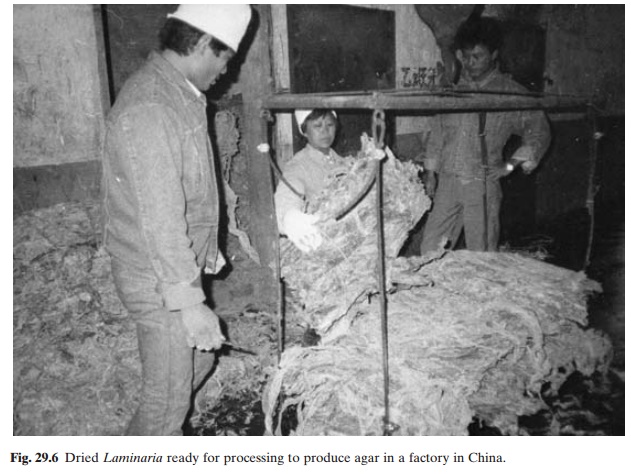