For all psychoactive treatments it is important to consider instances in which a specific therapy is not indicated for a disorder or kind of patient.

For all psychoactive treatments it is important to consider instances in which a specific therapy is not indicated for a disorder or kind of patient. Unfortunately, thus far there are no well-designed em-pirical studies of a psychotherapy’s potential “toxicities”, although there is speculation about the kinds of individuals who would be predicted to respond poorly to time-limited treatments

In the brief psychodynamic psychotherapy literature, time-limited treatments are generally not recommended for those individuals who might have difficulty in quickly forming a thera-peutic alliance or might develop severe difficulties in the face of termination (Marmor 1979). In practice, this usually translates into a reluctance to treat borderline, suicidal, substance abusing, or psychotic patients with brief psychotherapy (Davanloo, 1980; Mann, 1974; Sifneos, 1979). Also excluded are “acting out”, cog-nitively impaired, very dependent, or “unrestrainably” anxious patients (Koss and Shiang, 1994).

Although Sifneos (1979) and Mann (1974) consider severe psychopathology a contraindication to their brief psychodynamic psychotherapies, other time-limited treatments specifically tar-get serious mental disorders. IPT and CBT, for example, were developed for the treatment of major depression; these and other brief psychotherapies have been used to treat a spectrum of sig-nificant pathologies including bulimia (Fairburn, 1998), alcohol dependence (Miller et al., 1998), panic disorder (Barlow, 1997; Milrod et al., 2000), and post traumatic stress disorder (Foa et al., 1991)

Although it is unlikely that a personality disorder will re-mit following a course of brief psychotherapy, we also know that it is often difficult accurately to diagnose personality disorders in the presence of an Axis I disorder (Hirschfeld et al., 1983). Hence seeming Axis II pathology should rarely be an exclusion in the presence of an appropriate Axis I target disorder. Further-more, the structure and brevity of time-limited treatments may help the therapist to manage or circumvent some of the treatment-interfering behaviors characteristic of cluster B personality dis-orders. Thus, it may be reasonable to treat patients with moderate character pathology for an Axis I disorder with a TLP and then refer them for a different kind of psychotherapy once the acute symptoms have remitted.

Because these treatments are relatively short, it is easier (though by no means easy) to conduct psychotherapy outcome studies with TLPs than with longer-term psychotherapies. The past decade has witnessed the publication of relatively large numbers of TLP stud-ies. Because of these studies, we have more confidence that TLPs work, at least for particular indications, than other forms of psy-chotherapy. In Table 68.3, we summarize findings from empirical studies of TLPs as treatments for mood disorders. In Table 68.4 we summarize population-specific indications for selected TLPs. 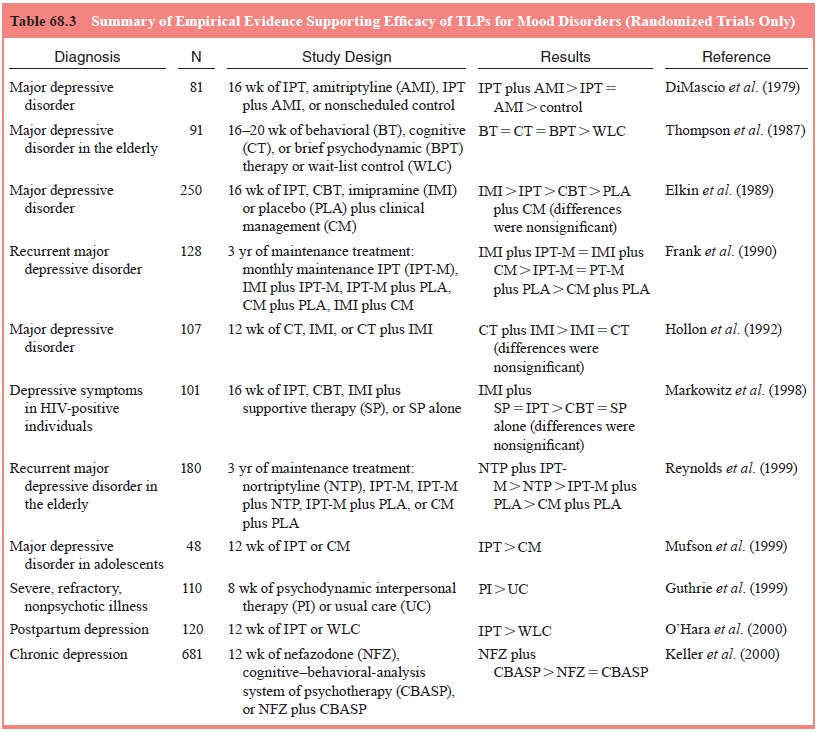 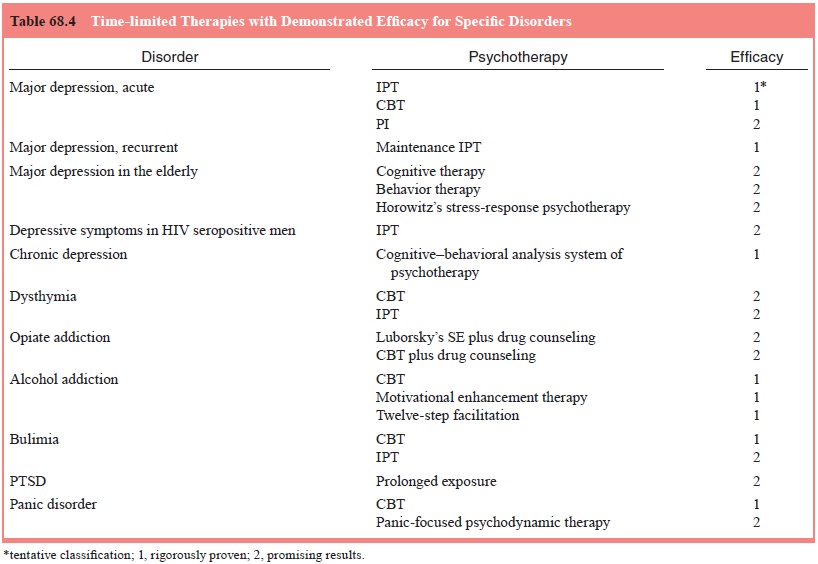