A statement is a phrase that commands the computer to do an action.

When a control flow statement is executed, the state of the process is tested, and depending on the result, a statement is selected for execution.

In order to execute the sequential statement, first do S1 and then do S2.

The sequential statement given above can be represented in a flowchart as shown in in Figure 7.2. The arrow from S1 to S2 indicates that S1 is executed, and after that, S2 is executed. 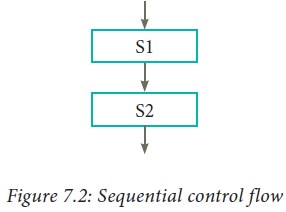 Let the input property be P, and the input-output relation be Q, for a problem. If statement S solves the problem, it is written as

If we decompose the problem into two components, we need to compose S as a sequence of two statements S1 and S2 such that the input-output relation of S1, say R, is the input property of S2.

Example 7.1. Let us solve the Farmer, Goat, Grass, and Wolf problem of Example 6.12. We decided to represent the state of the process by four variables farmer, goat, grass, and wolf, representing the sides of the farmer, goat, grass and wolf, respectively. In the initial state, all four variables have the value L (Left side). In the final state, all four variables should have the value R (Right side). The goal is to construct a statement S so as to move from the initial state to the final state.

1. goat and wolf have the same value but farmer has the opposite value, or

2. goat and grass have the same value but farmer has the opposite value.Subject to these constraints, a sequence of assignments and the state after each assignment are shown in Figure 7.3. 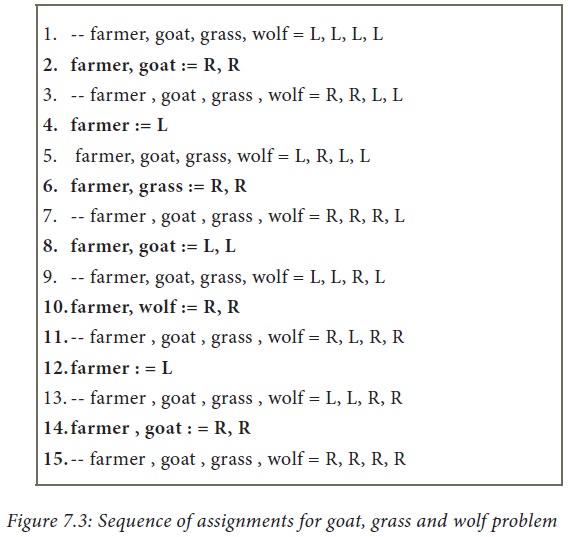 A condition is a phrase that describes a test of the state. If C is a condition and both

S1 and S2 are statements, then

is a statement, called an alternative statement, that describes the following action:

In pseudo code, the two alternatives S1 and S2 are indicated by indenting them from the keywords if and else, respectively. Alternative control flow is depicted in the flowchart of Figure 2.4. Condition C has two outgoing arrows, labeled true and false. The true arrow points to the S1 box. The false arrow points to the S2 box. Arrows out of S1 and S2 point to the same box, the box after the alternative statement. 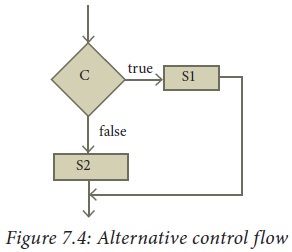 is a statement, called a conditional statement, that describes the following action:

The conditional control flow is depicted in the flowchart of Figure 2.5. 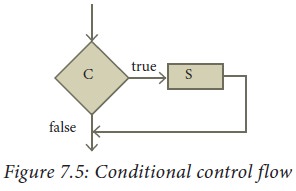 Algorithm minimum can be defined as

1.           The cases are exhaustive: at least one of the cases is true. If all conditions are false, the default case is true.

We can split the state into an exhaustive set of 3 disjoint cases: a < b, a = b, and a> b. Then we can define compare() using a case analysis.

An iterative process executes the same action repeatedly, subject to a condition C. If C is a condition and S is a statement, then

is a statement, called an iterative statement, that describes the following action: 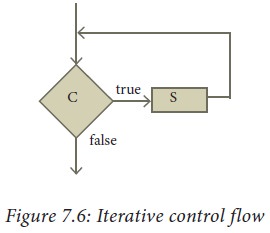 Example 7.4. Construct an iterative algorithm to compute the quotient and remainder after dividing an integer A by another integer B.

We formulated the specification of the algorithm in Example 6.6 as

Now we can construct an iterative algorithm that satisfies the specification.

The algorithm is presented as a flowchart in Figure 7.1.

We can execute the algorithm step-by-step for a test input, say, (A, B) = (22, 5). Each row of Table 7.1 shows one iteration — the evaluation of the expressions and the values of the variables at the end of an iteration. Note that the evaluation of the expression uses the values of the variables from the previous row. Output variables q and r change their values in each iteration. Input variables A and B do not change their values. Iteration 0 shows the values just before the loop starts. At the end of iteration 4, condition (r ≥ B) = (2 ≥ 5) is false, and hence the loop ends with (q, r) = (4, 2). 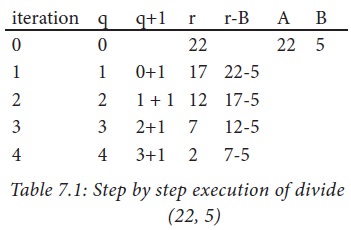 Example 7.5. In the Chameleons of Chromeland problem of Example 1.3, suppose two types of chameleons are equal in number. Construct an algorithm that arranges meetings between these two types so that they change their color to the third type. In the end, all should display the same color.

Let us represent the number of chameleons of each type by variables a, b and c, and their initial values by A, B and C, respectively. Let a = b be the input property. The input-output relation is a = b = 0 and c = A+B+C. Let us name the algorithm monochromatize. The algorithm can be specified as

In each iterative step, two chameleons of the two types (equal in number) meet and change their colors to the third one. For example, if A, B, C = 4, 4, 6, then the series of meetings will result in 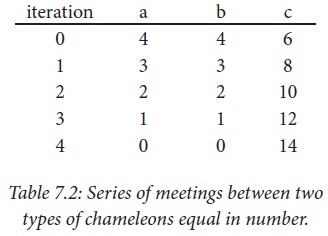 In each meeting, a and b each decreases by 1, and c increases by 2. The solution can be expressed as an iterative algorithm.

The algorithm is depicted in the flowchart of Figure 7.7. 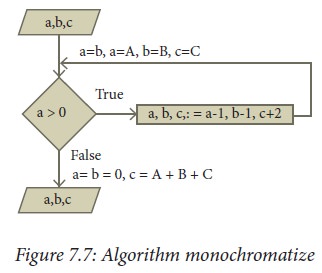