Components of a Computer 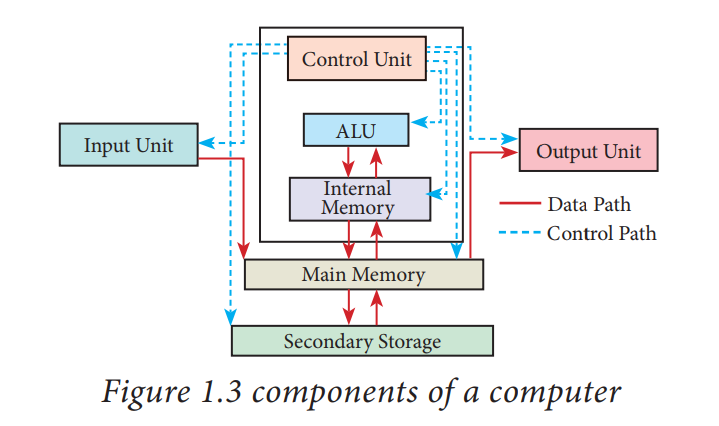 The computer is the combination of hardware and software.

Components of a Computer 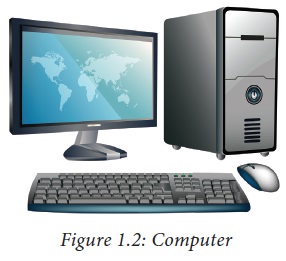 Let us first have a look at the functional components of a computer. Every task given to a computer follows an Input- Process- Output Cycle (IPO cycle). It needs certain input, processes that input and produces the desired output. The input unit takes the input, the central processing unit does the processing of data and the output unit produces the output. The memory unit holds the data and instructions during the processing. 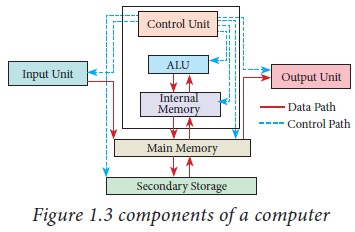 Input unit is used to feed any form of data to the computer, which can be stored in the memory unit for further processing. Example: Keyboard, mouse, etc.

CPU is the major component which interprets and executes software instructions. It also control the operation of all other components such as memory, input and output units. It accepts binary data as input, process the data according to the instructions and provide the result as output.

The CPU has three components which are Control unit, Arithmetic and logic unit (ALU) and Memory unit.

The ALU is a part of the CPU where various computing functions are performed on data. The ALU performs arithmetic operations such as addition, subtraction, multiplication, division and logical operations. The result of an operation is stored in internal memory of CPU. The logical operations of ALU promote the decision-making ability of a computer.

The control unit controls the flow of data between the CPU, memory and I/O devices. It also controls the entire operation of a computer.

An Output Unit is any hardware component that conveys information to users in an understandable form. Example: Monitor, Printer etc.

(1) Keyboard: Keyboard (wired / wireless, virtual) is the most common input device used today. The individual keys for letters, numbers and special characters are collectively known as character keys. This keyboard layout is derived from the keyboard of original typewriter. The data and instructions are given as input to the computer by typing on the keyboard. Apart from alphabet and numeric keys, it also has Function keys for performing different functions. There are different set of keys available in the keyboard such as character keys, modifier keys, system and GUI keys, enter and editing keys, function keys, navigation keys, numeric keypad and lock keys.

(2) Mouse: Mouse (wired/wireless) is a pointing device used to control the movement of the cursor on the display screen. It can be used to select icons, menus, command buttons or activate something on a computer. Some mouse actions are move, click, double click, right click, drag and drop. 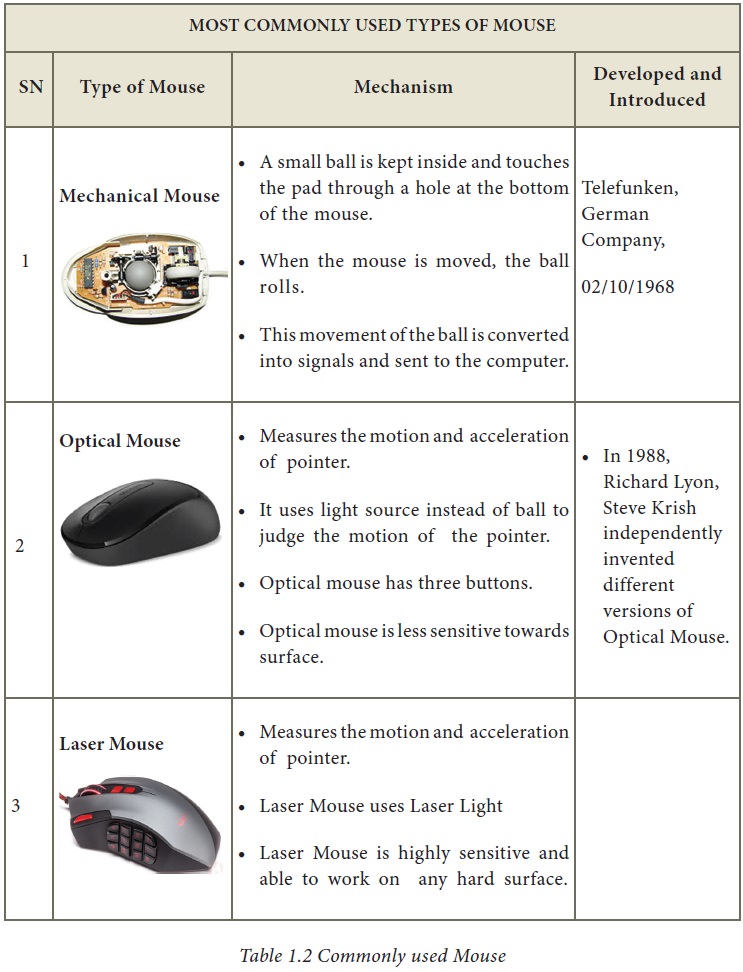 The computer mouse as we know it today was invented and developed by Douglas Engelbart, with the assistance of Bill English, during the 1960's and was patented on November 17, 1970.

(3) Scanner: Scanners are used to enter the information directly into the computer’s memory. This device works like a Xerox machine. The scanner converts any type of printed or written information including photographs into a digital format, which can be manipulated by the computer. 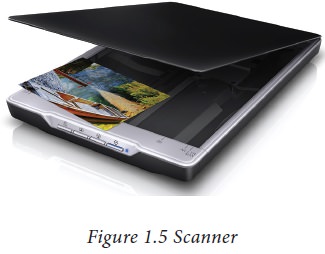 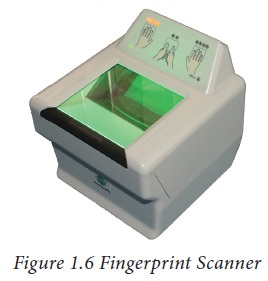 (5) Track Ball: Track ball is similar to the upside- down design of the mouse.  The user moves the ball directly, while  the device itself remains stationary. The  user spins the ball in various directions to navigate the screen movements. 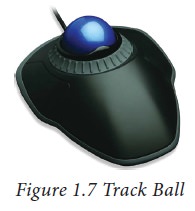 (6) Retinal Scanner: This performs a retinal scan which is a biometric technique that uses unique patterns on a person's retinal blood vessels. 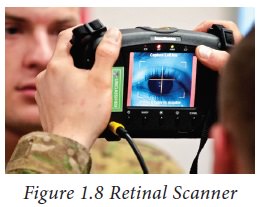 (7) Light Pen: A light pen is a pointing device shaped like a pen and is connected to a monitor. The tip of the light pen contains a light-sensitive element which detects the light from the screen enabling the computer to identify the location of the pen on the screen. Light pens have the advantage of ‘drawing’ directly onto the screen, but this becomes hard to use, and is also not accurate. 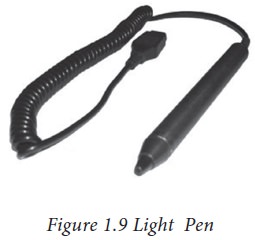 (8) Optical Character Reader: It is a device which detects characters printed or written on a paper with OCR, a user can scan a page from a book. The Computer will recognize the characters in the page as letters and punctuation marks and stores. The Scanned document can be edited using a wordprocessor. 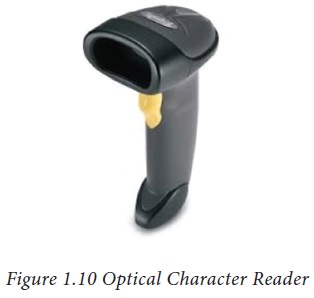 (9) Bar Code / QR Code Reader: A Bar code is a pattern printed in lines of different thickness. The Bar code reader scans the information on the bar codes transmits to the Computer for further processing. The system gives fast and error free entry of information into the computer.

QR (Quick response) Code: The QR code is the two dimension bar code which can be read by a camera and processed to interpert the image. 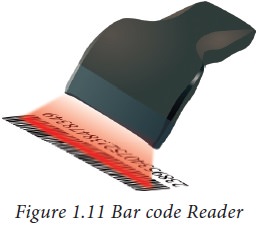 (10) Voice Input Systems: Microphone serves as a voice Input device. It captures the voice data and send it to the Computer. Using the microphone along with speech recognition software can offer a completely new approach to input information into the Computer. 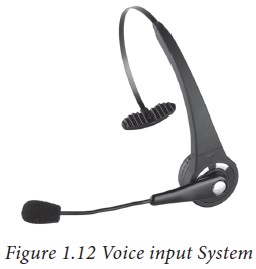 (11) Digital Camera: It captures images / videos directly in the digital form. It uses a CCD (Charge Coupled Device) electronic chip. When light falls on the chip through the lens, it converts light rays into digital format. 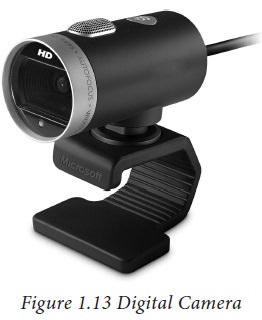 (12) Touch Screen: A touch screen is a display device that allows the user to interact with a computer by using the finger. It can be quite useful as an alternative to a mouse or keyboard for navigating a Graphical User Interface (GUI). Touch screens are used on a wide variety of devices such as computers, laptops, monitors, smart phones, tablets, cash registers and information kiosks. Some touch screens use a grid of infrared beams to sense the presence of a finger instead of utilizing touch-sensitive input. 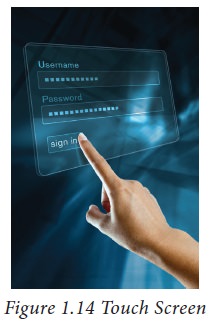 (13) Keyer : A Keyer is a device for signaling by hand, by way of pressing one or more switches. Modern keyers have a large number of switches but not as many as a full size keyboard. Typically, this number is between 4 and 50. A keyer differs from a keyboard, which has "no board", but the keys are arranged in a cluster. 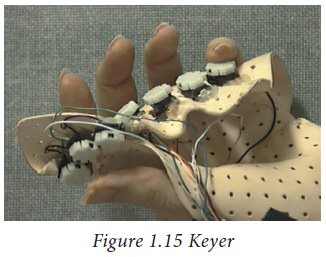 (1) Monitor: Monitor is the most commonly used output device to display the information. It looks like a TV. Pictures on a monitor are formed with picture elements called PIXELS. Monitors may either be Monochrome which display text or images in Black and White or can be color, which display results in multiple colors. There are many types of monitors available such as CRT (Cathode Ray Tube), LCD (Liquid Crystal Display) and LED (Light Emitting Diodes). The monitor works with the VGA (Video Graphics Array) card. The video graphics card helps the keyboard to communicate with the screen. It acts as an interface between the computer and display monitor. Usually the recent motherboards incorporate built-in video card.

The first computer monitor was part of the Xerox Alto computer system, which was released on March 1, 1973. 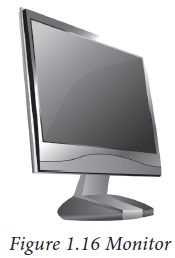 (2) Plotter: Plotter is an output device that is used to produce graphical output on papers. It uses single color or multi color pens to draw pictures. 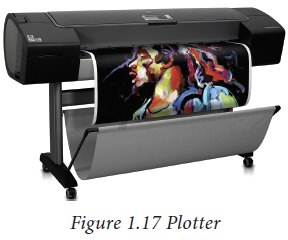 (3) Printers: Printers are used to print the information on papers. Printers are  divided  into  two  main  categories:

A Dot matrix printer that prints using a fixed number of pins or wires. Each dot is produced by a tiny metal rod, also called a “wire” or “pin”, which works by the power of a tiny electromagnet or solenoid, either directly or through a set of small levers. It generally prints one line of text at a time. The printing speed of these printers varies from 30 to 1550 CPS (Character Per Second). 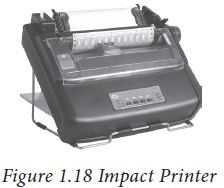 Line matrix printers use a fixed print head for printing. Basically, it prints a page-wide line of dots. But it builds up a line of text by printing lines of dots. Line printers are capable of printing much more than 1000 Lines Per Minute, resulting in thousands of pages per hour. These printers also uses mechanical pressure to print on multi-part (using carbon papers).

Laser printers mostly work with similar technology used by photocopiers. It makes a laser beam scan back and forth across a drum inside the printer, building up a pattern. It can produce very good quality of graphic images. One of the chief characteristics of laser printer is their resolution – how many Dots per inch(DPI). The available resolution range around 1200 dpi. Approximately it can print 100 pages per minute(PPM) 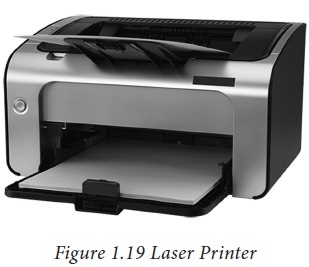 Inkjet Printers use colour cartridges which combined Magenta, Yellow and Cyan inks to create color tones. A black cartridge is also used for monochrome output. Inkjet printers work by spraying ionised ink at a sheet of paper. The speed of Inkjet printers generaly range from 1-20 PPM (Page Per Minute). 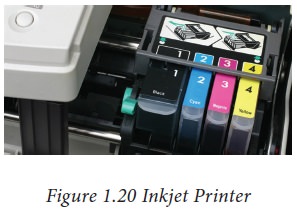 They use the technology of firing ink by heating it so that it explodes towards the paper in bubbles or by using piezoelectricity in which tiny electric currents controlled by electronic circuits are used inside the printer to spread ink in jet speed. An Inkjet printer can spread millions of dots of ink at the paper every single second. 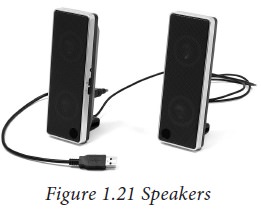 Multimedia projectors are used to produce computer output on a big screen. These are used to display presentations in meeting halls or in classrooms. 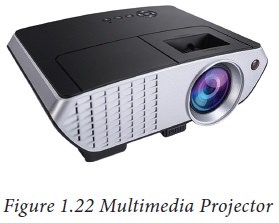