Multimedia has five major components like text, images, sound, video and animation. They are explained in detail below:

Multimedia has five major components like text, images, sound, video and animation. They are explained in detail below: 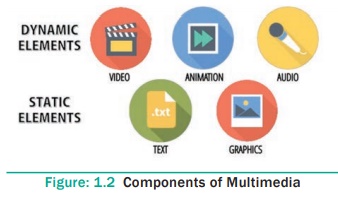 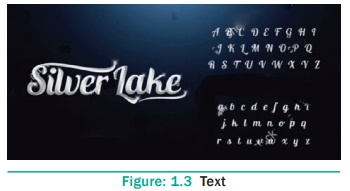 Static text, the text which will remain static as a heading or in a line, or in a paragraph. The words are given along with the images to explain about the images. In static text the words will either give information or support an image or an video. 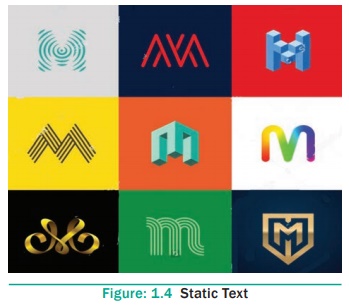 A hypertext is a system which consists of nodes, the text and the links between the nodes, which defines the path the user need to follow for the text access in non-sequential ways. The author of the working system created this structure. The user is permitted to define their own paths in more sophisticated hypertext systems. The user is provided with the flexibility and choice to navigate in hypertext. In a multimedia product, text is used to convey the information and must be placed at appropriate position in order to obtain the well -formatted sentences and paragraphs. The readability of the text depends on the spacing and punctuation. The message communication is more appropriate with improved Fonts and styles.

Images acts as an vital component in multimedia. These images are generated by the computer in two ways, as bitmap or raster images and as vector images.

The common and comprehensive form of storing images in a computer is raster or bitmap image. Bitmap is a simple matrix of the tiny dots called pixel that forms a raster or bitmap image. Each pixel consists of two or more colors. Based on how much data, in bits is used to determine the number of colors, the color depth is determined. Eg. one bit is two colors, four bits means sixteen colors, eight bits indicates 256 colors, and so on.1.1

Drawing elements or objects such as lines, rectangles, circles and so on to create an images are based on Vector images. The advantage of vector image is relatively small amount of data is required to represent the image and thereby only less memory is needed to store. Compression techniques are used to reduce the file size of images that is useful for storing large number of images and speeding transmission for networked application. various Compression formats used for this purpose are GIF, TIFF and JPEG. 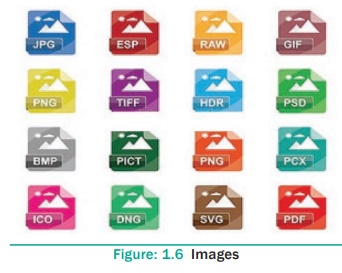 Animation is the process of displaying still images so quickly so that they give the impression of continuous movement. In animation the screen object is a vector image. Using numerical transformations the movement of that image along its paths is calculated for their defining coordinates. The least frame rate of at least 16 frames per second gives the impression of smoothness and for natural looking it should be at least 25 frames per second. Animations may be in two or three dimensional. A two dimensional animation, brings an image alive, that occur on the flat X and Y axis of the screen. while in three dimensional animation it occurs along the three axis X, Y and Z. Animation tools are very powerful and effective. The two basic types of animations are Path animation and Frame animation.

Path animation involves moving an object on a screen that has a constant background e.g. a cartoon character may move across the screen regardless of any change in the background or the character. 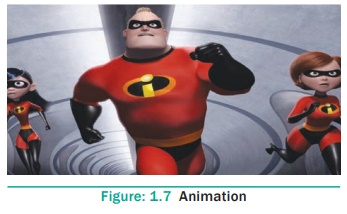 In frame animations, multiple objects are allowed to travel simultaneously and the background or the objects also changes.

Sound is a meaningful speech in any language and is the most serious element in multimedia, providing the pleasure of music, special effects and so on. Decibels is the measurement of volume, the pressure level of sound. 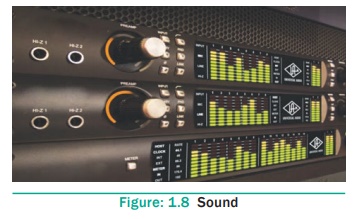 Musical Instrument Digital Identifier (MIDI) is a standard communication tool developed for computers and electronic instruments. This tool is flexible and easy for composing the projects in multimedia. Tools for synthesizing the sound and software for sequencing are necessary for MIDI.

Sampled sound is a Digitized sound. A sample of sound is taken and stored every nth fraction of a second as digital information in bits and bytes. The quality of this recording depends on the sampling rate. sampling rate is defined as how often the samples are taken and how many numbers are used to represent the value of each sample (bit depth, resolution and sample size). The finer the quality of the captured sound and the resolution is achieved while played back, when more often the sample is taken and the more data is stored about that sample.

Video is defined as the display of recorded event, scene etc. The powerful way to convey information in multimedia applications are embedding of video. The video can be categorized in two types as Analog video and Digital video.

In Analog video, the video data’s are stored in any non-computer media like video tape, laser disc, film etc. It is divided further in two types as Composite and Component Analog Video. Composite Analog Video has all the video components

like brightness, color, and synchronization combined into one signal. Thus the quality of the composite video resulted in color blending, low clarity and high generational loss.

Digital video is an electronic representation of moving visual images in the form of encoded digital data. This is in contrast to analog video where images are displayed in rapid succession.