Components in a Aquaculture re-use system

Components in a re-use system

Fish require oxygen for respiration and produce faecal waste, urine and dissolved substances released over the gills (Fig. 10.6). The reasons for treating the water are therefore either to add new substances (oxygen) or to dilute waste products. The components required for water treatment, either for addition or removal of substances in the re-use circuit, can be calculated based on the equation given earlier in the chapter, and depend on species, size and growth rate. The usual order of necessary water treatment efforts is shown below, and compared to what happens in a tank were the inlet water flow is reduced (Fig. 10.7). To reduce the amount of incoming water to the tank is actually the same as using a re-use system without any purification units such as particle or ammonia removal filters. 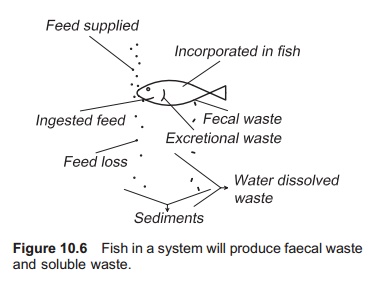 If the water is re-used without any treatment, the effect is the same as reducing the water inlet volume. The first problem is that the concentration of oxygen in the outlet water will be below recommended values; the main reason for adding water to the tank is to have an outlet oxygen level high enough to achieve maximum growth of the fish. If this water is re-used directly, the oxygen concentration will be too low and will result in growth reduction. If the reduction is excessive, mortality will occur; values are species-dependent. There are numerous ways to increase the concentration of oxygen in the water, including the usual method of adding an aerator before the inlet to the tank system. In addition, after the water has been aerated up to near 100% saturation pure oxygen can be added to increase the concentration further (supersaturation). Both aeration and oxygenation can also be done directly into the tank which will also reduce the requirement for additional water. 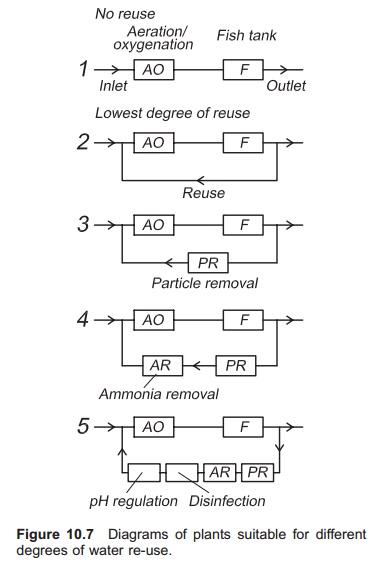 If aeration/oxygenation is carried out, the amount of water added to the system can be reduced. This new value is normally set by the acceptable SS concentration, but may vary with organism and species. The water flow-through the tanks must now be sufficiently high to dilute the SS concentration to avoid reduction in growth. Methods of achieving this are given, but usually the outlet water is sent over some kind of micro-strainer where particles are removed before the water is recycled. Another way to deal with this is to use a dual drain outlet with a separate particle outlet from which the SS are drawn off in 1–5% of the total water flow enabling the rest of the water to be re-used without any other treatment.

If the amount of new water is reduced significantly, the next problem that may occur is accumulation of CO2 in the tank to critical levels, because the fish release CO2 through the gills as a waste product of metabolism and the concentration in the water increases. Tank aeration or piping the water through an aerator are two possible solutions to this problem; however, normally this has already been done to increase the concentration of oxygen in the water. If continuously high concentrations of CO2 are experienced a vacuum aerator may be used because this is more effective for removing CO2 than a traditional aerator designed to increase the oxygen concentration.

Reduction of the water flow into the tank can lead to excessive concentrations of NH3 (actually TAN, because there is a connection between NH3 and NH4+ levels which depends on the pH). The normal method of reducing the NH3 concentration in the system is to use a biofilter in the re-use circuit that transforms ammonia to less harmful nitrate (NO3).

The normal units included in a re-use system are described above. However, other problems may occur when adding a small amount of new water or with a high degree of re-use. This problem mainly concerns the components in the re-use circuit: the complexity of the system means that a good knowl-edge of water quality and the way in which differ-ent water quality parameters influence each other is very important.

There will be a drop in the pH in the system with high degrees of re-use. The reasons for this are that the biofilter process release H+ ions to the water, and that CO2 is released by the fish. Therefore pH regulation must be included in the water treatment for the system, for instance addition of lime.

When having high percentages of water re-use (>99%), high fish densities and a biofilter in the system for ammonia removal, the concentration of nitrate (NO3) can reach values that can be toxic to the fish if it is not removed. Usually a denitrification filter is added to the re-use circuit. Here nitrate is transformed to nitrogen gas (N2) that can be removed by aeration.

High degrees of water re-use will normally also increase the total number of bacteria, some of which might be pathogenic. It is therefore normal to include disinfection in the circuit, for instance UV irradiation.