The dissection of tonsils, adenoids, hernia sacs, intervertebral discs, and amputations for gan-grene are fairly straightforward, yet a brief discussion of the appropriate handling of these specimens is important for two reasons.

The dissection of tonsils, adenoids, hernia sacs, intervertebral discs, and amputations for gan-grene are fairly straightforward, yet a brief discussion of the appropriate handling of these specimens is important for two reasons. First, because these specimens are so frequently en-countered, even small mistakes in technique can be magnified over the course of handling numer-ous specimens. By getting it right the first time, you can avoid developing bad habits that are perpetuated with subsequent dissections. Second, mundane specimens are particularly suscepti-ble to cursory and inattentive examinations. As is true for novel and complex specimens, the pro-sector should carefully examine the specimen and tailor a dissection that is attuned to the clini-cal context. 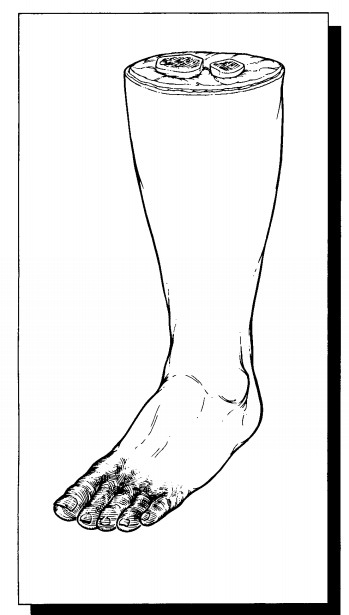 The term tonsils usually refers to the palatine ton-sils. These are located laterally on each side of the oral cavity as it communicates with the oro-pharynx. The term adenoids refers to the pharyn-geal tonsils. These are located along the roof of the nasal cavity as it communicates with the naso-pharynx. Even when these two structures are re-ceived together in the same specimen container, they can easily be distinguished by their gross appearance. The palatine tonsils are oval-shaped nodules of tissue. They are longer vertically than they are horizontally. Their attached (i.e., lateral) surface is covered by a thick fibrous capsule with adherent soft tissues, while their free (i.e., medial) surface is covered by a tan, glistening mucosa and is somewhat cerebriform, which is due toa longitudinal cleft and stellate crypt openings. The adenoids, on the other hand, tend to be flat and are frequently fragmented when removed. Their free (mucosal) surfaces are disrupted by deep longitudinal clefts that extend into the un-derlying lymphoid tissue.

The palatine tonsils are usually removed from both sides of the oropharynx. Subtle changes in the size, shape, and consistency of the ton-sils can be appreciated by comparing the two tonsils. For example, enlargement that is due to an infiltrative process may best be appre-ciated when the enlarged tonsil is compared to the normal tonsil from the opposite side. After the tonsils and adenoids are identified, they should be separately measured and de-scribed. Look for exophytic masses, ulcerations, bulky enlargement, and any other gross abnor-malities. Bivalve the tonsils and adenoids along the long axis of each, and carefully inspect the cut surface for masses, abscess formation, or other lesions.

2. The tonsils or adenoids are grossly ab-normal.

3. The tonsils or adenoids are greater than 3 cm.

4. There is a size disparity between the two tonsils.

5. Histologic evaluation is requested by the clini-cian or is indicated by the patient’s clinical history.

If any one of the above criteria is met, the tonsils and adenoids should be appropriately sampled for histologic evaluation. One or two represen-tative sections of the tonsils and adenoids are generally sufficient, but certain conditions may require special processing or more extensive sec-tioning. For example, diffusely enlarged tonsils or adenoids with architectural effacement may suggest involvement by a lymphoproliferative disorder, and these should be processed like a lymph node involved by a lymphoma (see Chap-ter 41). Sometimes the tonsils are removed in an attempt to find an ‘‘occult’’ primary neoplasm in a patient presenting with metastatic carcinoma to cervical lymph nodes. In this situation, the tonsils should be serially sectioned and submit-ted in their entirety for histologic evaluation. If the tonsils or adenoids do not meet any of the above criteria, they do not need to be sampled for histologic evaluation. After completing your gross description, place the specimen in formalin and store it for at least 2 weeks.

Hernia sacs are pouches of peritoneum enclosing a hernia. Grossly and microscopically, these are unimpressive specimens. They consist of vari-able amounts of fat, fibroconnective tissue, and a mesothelium-lined peritoneum. Nonetheless, even hernia sacs attest to the dictum that unex-pected but important pathologic findings can be discovered in the most mundane of specimens. Indeed, a wide range of pathologic findings have been documented in routinely resected hernia sacs, ranging from endometriosis to malignant mesothelioma.

Measure and describe the sac, taking note of any areas that appear hemorrhagic or discolored. Palpate the specimen, and document the contents of the hernia sac and whether any nodules are present. Small specimens do not require addi-tional sectioning. Larger tissue fragments should be serially sectioned. Document the gross appear-ance of the cut sections. Standards for submitting grossly normal hernia sacs for histologic exami-nation vary from institution to institution. In the current era of cost containment, some centershave eliminated the routine histologic examina-tion of grossly normal pediatric hernia sacs. Nonetheless, all grossly abnormal hernia sacs, all hernia sacs excised from adults, and all hernia sacs from patients whose clinical history indicates a possible histology-based diagnosis should be submitted for histologic evaluation. Most hernia sacs can be entirely submitted in a single tissue cassette for histologic evaluation. For larger speci-mens, a single cassette with sections representing all components of the specimen is generally suf-ficient. More extensive sampling may be neces-sary when focal lesions are identified or when indicated by the patient’s clinical history.

Intervertebral disks typically consist of multiple irregular fragments of fibrous tissue, cartilage, and bone in variable proportions. These frag-ments are small and generally do not require sectioning. Nonetheless, the prosector’s role in handling these is not inconsequential. The appro-priate sampling and processing of these speci-mens largely depends on the prosector’s skill at recognizing the various components that are present.

Begin by measuring the specimen. This can be done most efficiently by measuring the aggre-gate dimensions of the specimen (not the dimen-sions of each individual piece). Describe the type and appearance of the tissue received. Separate the bone from the soft tissue fragments, and decalcify the pieces of bone so that they can be sectioned by the histology laboratory (see Chap-ter 2). Keep in mind that these small bone frag-ments do not require nearly as much time to decalcify as sections from large bone resections. As is true for tonsils, adenoids, and hernia sacs, some centers have eliminated histologic exami-nation of disk tissue specimens after routine cervical and lumbar decompression. Nonethe-less, routine disk tissue is submitted for histolo-gic examination at most centers, and the tissues must be submitted when clinically indicated. After the bone has been separated, submit the soft tissues for histologic evaluation. Again, if all of the tissue does not easily fit into a single tissue cassette, submit fragments that are rep-resentative of the specimen as a whole. Some-times the patient’s clinical history may indicatemore extensive sampling, as when metastatic car-cinoma is suspected clinically.

Admittedly, most amputation specimens are nei-ther small nor anatomically simple. On the other hand, the dissection of amputations for gangrene is straightforward and need not entail an inordi-nate amount of time and effort. The dissection of these specimens, whether a resection of a digit or an entire limb, should focus on two key questions: What are the nature and extent of the lesion (e.g., ulceration and gangrene)? What is the underly-ing pathologic process (e.g., vascular occlusion)? As for all specimens, the patient’s clinical history should be clarified before the dissection of an amputation specimen is begun. Clinical and ra-diographic findings may direct the dissection to the most relevant areas of the specimen.

First, measure the overall dimensions of the specimen. Make liberal use of anatomic land-marks (e.g., tibial tubercle, lateral tibial malleo-lus) when measuring the specimen and describing the location of any lesions. Next, examine the four components of the specimen—the skin, soft tissues, bone, and vasculature. Begin with the skin. Look for loss of hair, skin discoloration, and frank ulceration. Note the location of these findings. Next, evaluate the soft tissues. Section through any ulcers to determine the depth of the ulcer. Do the surrounding soft tissuesappear necrotic? Also note whether the soft tis-sues at the surgical margin appear viable. The bone underlying areas of ulceration and necrosis is most likely to reveal pertinent pathology. Spe-cifically, section through the deepest area of any ulcer, and determine if the underlying bone is grossly involved by the inflammatory process. Fi-nally, evaluate the vasculature. For amputations of the lower limbs, occlusive vascular disease can usually be documented by performing a limited dissection of the anterior and posterior tibial ar-teries. These can be located by sectioning deeply into the anterior and posterior compartments of the calf. A deep transverse incision at midcalf can usually accomplish this. When a complete dissec-tion of a particular vascular tree is indicated, an anatomy text outlining the distribution of the blood supply should be consulted.

Sections should be taken to demonstrate is-chemic changes in the skin, necrosis of the soft tissue, inflammation in the underlying bone, oc-clusive disease of the vascular tree, and viability of the soft tissues at the surgical margin. When sampling the ulcer, include the adjacent epider-mis and the underlying subcutaneous tissues. If the zone of ulceration and necrosis appears to extend to the bone, submit a section of the bone immediately underlying the ulcer. Submit cross sections of the major arteries, selectively sam-pling those regions where the lumen is most stenotic. Finally, submit a transverse section of the neurovascular bundle at the resection margin, along with some skin and soft tissue from this region.