The evaluation of the bone marrow typically in-cludes both a trephine core biopsy and fluid aspi-ration. The details of the preparation of these specimens are beyond the scope of this manual; however, you should be familiar with some basics.

The evaluation of the bone marrow typically in-cludes both a trephine core biopsy and fluid aspi-ration. The details of the preparation of these specimens are beyond the scope of this manual; however, you should be familiar with some basics.

Trephine core biopsies are usually 1.0 to 3.0 cm in length and 0.1 to 0.2 cm in diameter. Because of their small size, they generally do not have to be sectioned for further processing. After document-ing the size of the biopsy, while it is still fresh prepare imprints from the biopsy by gently touching the bony fragments to glass slides. These smears should be air dried for later Wright’s staining or other special studies such as cyto-chemical and immunohistochemical analyses. Next, submit the entire core biopsy for process-ing. The choice of fixatives will depend on your individual institution, but most laboratories like to fix bone marrow biopsies in either Zenker’s fixative (for at least 4 hours), buffered formalin (for at least 18 to 24 hours), B-5 (for 4 hours), Bouin’s (for 4 to 12 hours), or a mixture of buf-fered formalin and ethylenediaminetetraacetic acid (EDTA). Once fixed, the specimen can be embedded in either paraffin or plastic. Although paraffin embedding is certainly easier, plastic em-bedding has the advantage of minimizing arti-facts produced by inadequate decalcification.

Usually, approximately 1 cc of liquid is ob-tained from a bone marrow aspirate. Nine to ten smears should be made immediately, before the fluid clots. These smears can be prepared much the same way as peripheral blood smears are made. To make smears on a coverslip, place a drop on the edge of one coverslip, cover it with another coverslip placed at a 45-degree angle, and as the drop spreads pull the two coverslips apart

rapidly and smoothly. Alternatively, one drop of the aspirate can be placed at one end of a glass slide and then gently smeared using a pusher coverslip, as illustrated. These smears should be air dried. The remaining aspirate should be placed in an anticoagulant such as EDTA and taken to the hematology laboratory for further processing, which might include iron staining, the preparation of additional smears, and possi-ble electron microscopy. Generally, additional aspirates should be obtained for ancillary studies such as cytogenetics and flow cytometry.

Finally, excess aspirate fluid that has been al-lowed to clot can be submitted to the laboratory for histologic processing after it has been fixed in formalin. 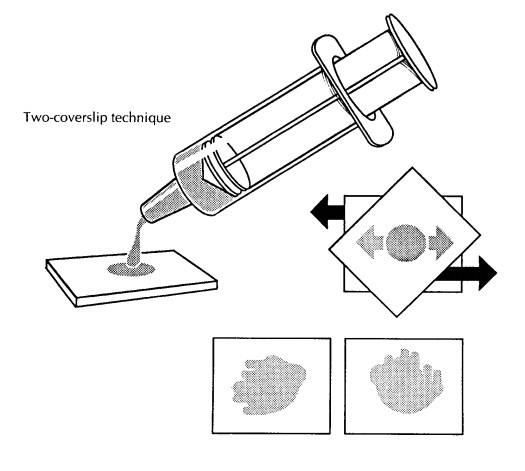 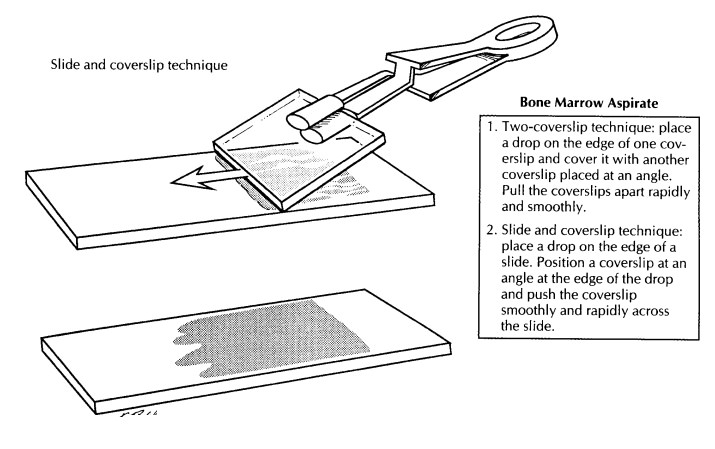 • Describe the cellularity, the relative numbers of myeloid and erythroid elements, and their degree of maturation. The marrow biopsy can be used to assess quantitative aspects of matu-ration, but subtle qualitative aspects are best appreciated on the aspirate.

• Describe the number of megakaryocytes, their arrangement, and any cytologic abnormalities.

• Note the degree and pattern of marrow fibrosis.

• Are there any increases in lymphocytes or plasma cells (include the pattern of infiltration and their cytology)?

• Is an extrinsic tumor present?

• Is the bone itself normal or abnormal?

Each of these features should be commented on in the surgical pathology report, although a very brief description can suffice for features that are normal. Where possible, information from the biopsy, aspirate, and other ancillary studiesshould be combined to make a definitive diag-nosis. In cases for which only a biopsy is avail-able, sometimes only a descriptive diagnosis is given. This practice varies from institution to institution.