Flukes of the genera Fasciola, Opisthorchis, and Clonorchis may all infect the human bil-iary tract and at times produce manifestations of ductal obstruction.

Flukes of the genera Fasciola, Opisthorchis, and Clonorchis may all infect the human bil-iary tract and at times produce manifestations of ductal obstruction. C. sinensis, the Chinese liver fluke, is the most important and is discussed here (see Table 58 – 2). The small, slender (5 by 15 mm) adult survives up to 50 years in the biliary tract of its host by feast-ing on the rich mucosal secretions. A cone-shaped anterior pole, a large oral sucker, and a pair of deeply lobular testes arranged one behind the other in the posterior third of the worm distinguish it from other hepatic parasites. Approximately 2000 tiny (15 by 30μm) ovoid eggs are discharged daily and find their way down the bile duct and into the fecal stream. The exquisite urn-shaped shells have a discernible shoulder at their opercular rim and a tiny knob on the broader posterior pole. On reaching fresh water, they are ingested by their intermediate snail host, transformed into cercariae, and released to penetrate the tissues of freshwater fish, in which they encyst to form metacercariae. If the latter host is ingested by a fish-eating mammal, the larvae are released in the duodenum, ascend the common bile duct, migrate to the second-order bile ducts, and mature to adulthood over 30 days.

In addition to humans, rats, cats, dogs, and pigs may serve as definitive hosts. 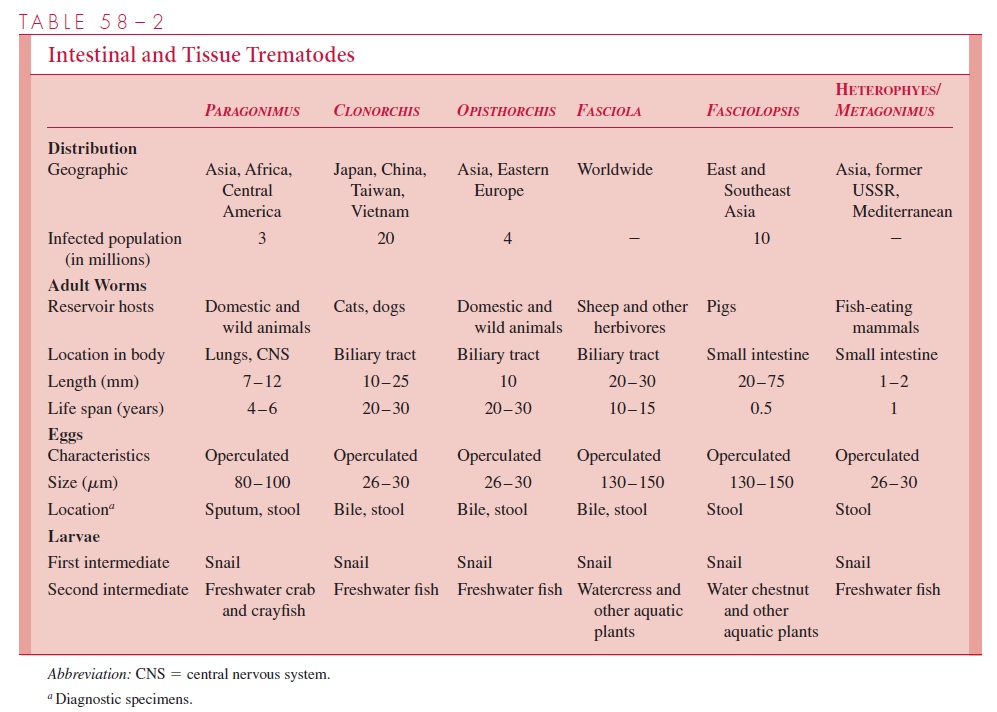