Several terms commonly applied to CNS infections need to be understood. Purulentmeningitis refers to infections of the meninges associated with a marked, acute inflam-matory exudate and is usually caused by a bacterial infection.

Several terms commonly applied to CNS infections need to be understood. Purulentmeningitis refers to infections of the meninges associated with a marked, acute inflam-matory exudate and is usually caused by a bacterial infection. Such infections frequently involve the underlying CNS tissue to a variable degree, and often the ventricular system is also involved (ventriculitis). Most cases of purulent meningitis are acute in onset and pro-gression and are characterized by fever, stiff neck, irritability, and varying degrees of neu-rologic dysfunction that, if untreated, usually progress to a fatal outcome. Large numbers of polymorphonuclear leukocytes are present in the CSF of established cases.

Chronic meningitis has a more insidious onset, with progression of signs and symp-toms over a period of weeks. This is usually caused by mycobacteria or fungi that produce granulomatous inflammatory changes, but occasionally protozoal agents are responsible (Table 67–3). The cellular response in the CSF reflects the chronic inflammatory nature of the disease. 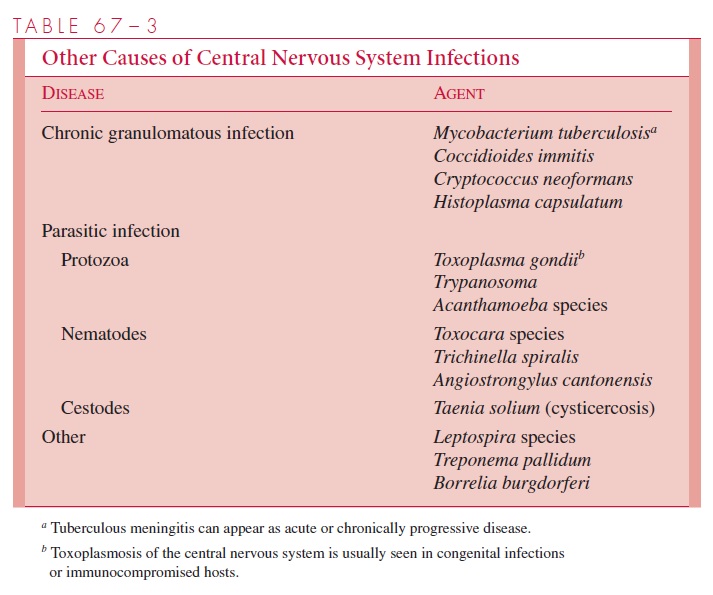 Aseptic meningitis is a term used to describe a syndrome of meningeal inflammationassociated mostly with an increase of cells (pleocytosis), primarily lymphocytes and other mononuclear cells in the CSF, and absence of readily cultivable bacteria or fungi. It is as-sociated most commonly with viral infections and is often self-limiting. The syndrome can also occur in syphilis and some other spirochetal diseases, as a response to the pres-ence of drugs or radiopaque substances in the CSF, or from tumors or bleeding involving the meninges or subarachnoid space. The primary site of inflammation is in the meninges without clinical evidence of involvement of the neural tissue. Such patients may have fever, headache, a stiff neck or back, nausea, and vomiting.

Encephalitis also implies a primary viral etiology; however, acute or chronic de-myelinating diseases with or without inflammation must also be considered. This latter group includes the postinfectious or allergic encephalomyelitis syndromes, in which the etiology and pathogenesis are not always clearly defined.

Clinically, the diagnosis of en-cephalitis is applied to patients who may or may not show signs and CSF findings com-patible with aseptic meningitis but also show objective evidence of CNS dysfunction (eg, seizures, paralysis, and disordered mentation). Many clinicians use the term meningoen-cephalitis to describe patients with both meningeal and encephalitic manifestations.

Poliomyelitis refers to the selective destruction of anterior motor horn cells in thespinal cord and/or brainstem, which leads to weakness or paralysis of muscle groups and occasionally respiratory insufficiency. It is usually associated with aseptic meningitis, sometimes with encephalitis. The polioviruses are the major causes of this syndrome, al-though coxsackieviruses (primarily type A7) and other enteroviruses, such as enterovirus 71, have been implicated. The hallmark of poliomyelitis is asymmetric flaccid paralysis.

Two other nervous system syndromes presumably associated with infection deserve brief mention. Acute polyneuritis, an inflammatory disease of the peripheral nervous system, is characterized by symmetric flaccid paralysis of muscles. In most cases, no spe-cific etiology is found; some, however, have been associated with Corynebacterium diph-theriae toxin and infections by bacterial enteric pathogens, cytomegalovirus orEpstein–Barr virus. Reye’s syndrome (encephalopathy with fatty infiltration of the vis-cera) is an acute, noninflammatory process, usually observed in childhood, in which cere-bral edema, hepatic dysfunction, and hyperammonemia develop within 2 to 12 days after onset of a systemic viral infection. Although the influenza A and B and varicella–zoster viruses have been most frequently implicated in this syndrome, the precise pathogenesis is not yet known. Concomitant salicylate therapy is known to be a contributory factor.