The errors can be classified into four types as follows:

The errors can be classified into four types as follows: 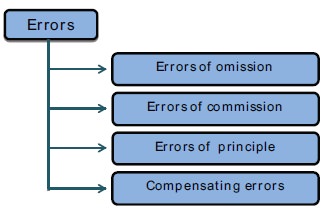 The failure of the accountant to record a transaction or an item in the books of accounts is known as an error of omission. It can be complete omission or partial omission.

(i) Error of complete omission

It means the failure to record a transaction in the journal or subsidiary book or failure to post both the aspects in ledger. This error affects two or more accounts.

When the accountant has failed to record a part of the transaction, it is known as error of partial omission. This error usually occurs in posting. This error affects only one account.

When a transaction is incorrectly recorded, it is known as error of commission. It usually occurs due to lack of concentration or carelessness of the accountant.

The following are the possibilities of error of commission:

i. Entering a wrong amount in a correct subsidiary book

ii. Entering a correct amount in a wrong subsidiary book

iii. Entering a wrong amount in a wrong subsidiary book

v. Posting a correct amount to the wrong side of an account in the Ledger

vi. Posting a wrong amount to the correct side of an account

vii. Posting a wrong amount to the wrong side of an account

viii. Posting a correct amount to a wrong account

ix. Posting a wrong amount to a wrong account

xi. Entering a transaction twice in the journal

xii. Errors arising in carrying forward from one page to the next page of an account

While carrying forward the total of one page of a ledger account to the next page, the wrong amount may be recorded

(xiii) Error arising in the balancing of an account

Sometimes, at the time of balancing a ledger account, the wrong balance may be written.

It means the mistake committed in the application of fundamental accounting principles in recording a transaction in the books of accounts.

The following are the possibilities of error of principle:

ii. Entering the sale of an asset in the sales book

The errors that make up for each other or neutralise each other are known as compensating errors. These errors may occur in related or unrelated accounts. Thus, excess debit or credit in one account may be compensated by excess credit or debit in some other account. These are also known as offsetting errors.