Circulatory Readjustments at Birth - Adjustments of the Infant to Extrauterine Life

Equally as essential as the onset of breathing at birth are immediate circulatory adjustments that allow ade-quate blood flow through the lungs.

Specific Anatomical Structure of the Fetal Circulation. Becausethe lungs are mainly nonfunctional during fetal life and because the liver is only partially functional, it is not necessary for the fetal heart to pump much blood through either the lungs or the liver. However, the fetal heart must pump large quantities of blood through the placenta. Therefore, special anatomical arrangements cause the fetal circulatory system to operate much differently from that of the newborn baby.

First, as shown in Figure 83–4, blood returning from the placenta through the umbilical vein passes through the ductus venosus, mainly bypassing the liver. Then most of the blood entering the right atrium from the inferior vena cava is directed in a straight pathway across the posterior aspect of the right atrium and through the foramen ovale directly into the left atrium. Thus, the well-oxygenated blood from the placenta enters mainly the left side of the heart, rather than the right side, and is pumped by the left ventricle mainly into the arteries of the head and forelimbs. 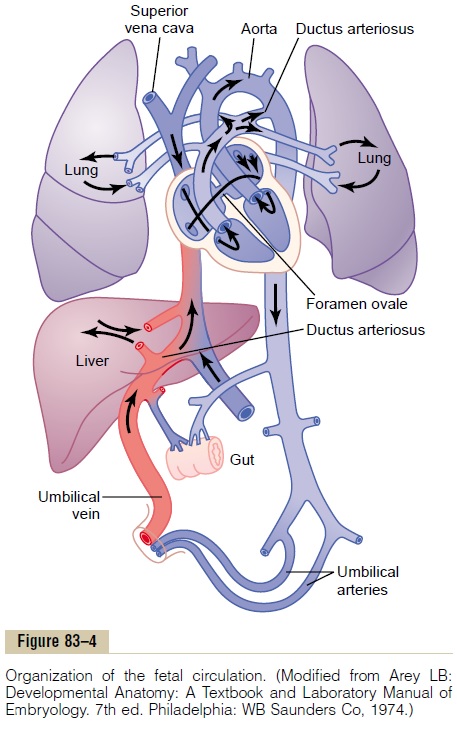 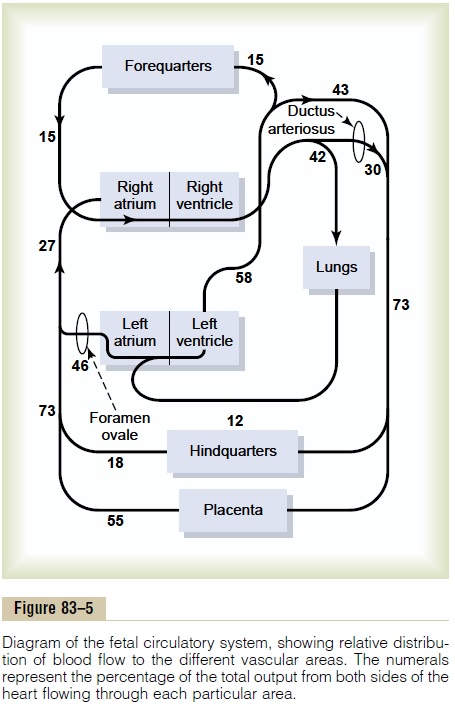 Changes in the Fetal Circulation at Birth. The basic changesin the fetal circulation at birth are discussed in relation to congenital anomalies of the ductus arteriosus and foramen ovale that persist throughout life in a few persons. Briefly, these changes are the following.

Primary Changes in Pulmonary and Systemic Vascular Resistances at Birth

The primary changes in the circulation at birth are, first, loss of the tremendous blood flow through the placenta, which approximately doubles the systemic vascular resistance at birth. This increases the aortic pressure as well as the pressures in the left ventricle and left atrium.

Second, the pulmonary vascular resistance greatlydecreases as a result of expansion of the lungs. In theunexpanded fetal lungs, the blood vessels are com-pressed because of the small volume of the lungs. Imme-diately on expansion, these vessels are no longer compressed and the resistance to blood flow decreases severalfold. Also, in fetal life, the hypoxia of the lungs causes considerable tonic vasoconstriction of the lung blood vessels, but vasodilation takes place when aera-tion of the lungs eliminates the hypoxia. All these changes together reduce the resistance to blood flow through the lungs as much as fivefold, which reduces thepulmonary arterial pressure, right ventricular pressure,and right atrial pressure.

Closure of the Foramen Ovale

The low right atrial pressure and the high left atrial pres-sure that occur secondarily to the changes in pulmonary and systemic resistances at birth cause blood now to attempt to flow backward through the foramen ovale; that is, from the left atrium into the right atrium, rather than in the other direction, as occurred during fetal life. Consequently, the small valve that lies over the foramen ovale on the left side of the atrial septum closes over this opening, thereby preventing further flow through the foramen ovale.

In two thirds of all people, the valve becomes adher-ent over the foramen ovale within a few months to a few years and forms a permanent closure. But even if per-manent closure does not occur, the left atrial pressure throughout life normally remains 2 to 4 mm Hg greater than the right atrial pressure, and the backpressure keeps the valve closed.

Closure of the Ductus Arteriosus

The cause of ductus arteriosus closure relates to the increased oxygenation of the blood flowing through the ductus. In fetal life the PO2 of the ductus blood is only 15 to 20 mm Hg, but it increases to about 100 mm Hg within a few hours after birth. Furthermore, many experiments have shown that the degree of contraction of the smooth muscle in the ductus wall is highly related to this availability of oxygen.

In one of several thousand infants, the ductus fails to close, resulting in a patent ductus arteriosus. The failure of closure has been postulated to result from excessive ductus dilation caused by vasodilating prostaglandins in the ductus wall. In fact, administration of the drug indomethacin, which blocks synthesis of prostaglandins, often leads to closure.

Closure of the Ductus Venosus In fetal life, the portal bloodfrom the fetus’s abdomen joins the blood from the umbilical vein, and these together pass by way of the ductus venosus directly into the vena cava immediatelybelow the heart but above the liver, thus bypassing the liver.