Arithmetic circuits are the ones which perform arithmetic operations like addition, subtraction, multiplication, division, parity calculation. Most of the time, designing these circuits is the same as designing mux, encoders and decoders.

Arithmetic circuits are the ones which perform arithmetic operations like addition, subtraction, multiplication, division, parity calculation. Most of the time, designing these circuits is the same as designing mux, encoders and decoders.

Adders are the basic building blocks of all arithmetic circuits; adders add two binary numbers and give out sum and carry as output. Basically we have two types of adders.

A half-adder is an arithmetic circuit block that can be used to add two bits. Such a circuit thus has two inputs that represent the two bits to be added and two outputs, with one producing the SUM output and the other producing the CARRY.

Adding two single-bit binary values X, Y produces a sum S bit and a carry out C-out bit. This operation is called half addition and thus the circuit to realize it is called a half adder. 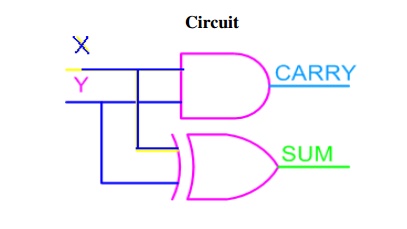 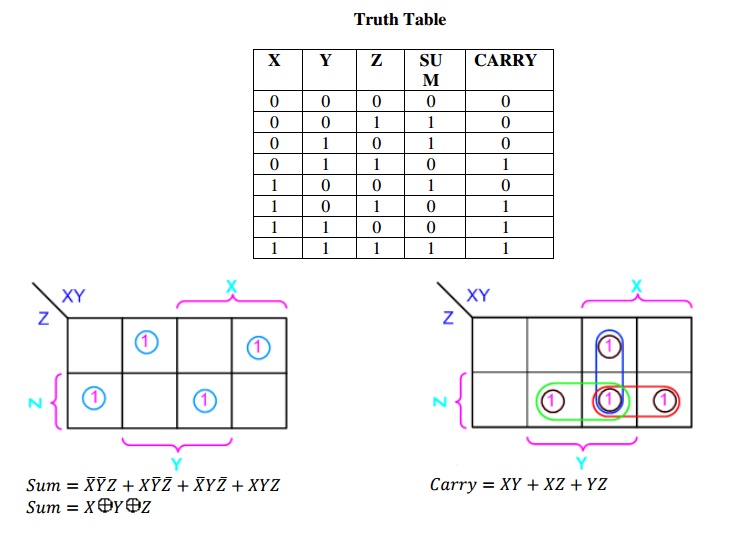 The below implementation shows implementing the full adder with AND-OR gates, instead of using XOR gates. The basis of the circuit below is from the above K-map 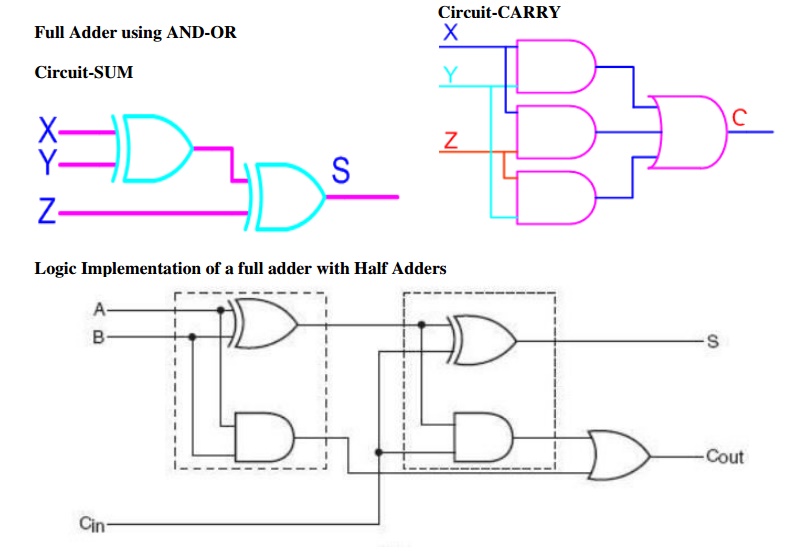 An n-bit adder used to add two n-bit binary numbers can be built by connecting n full adders in series. Each full adder represents a bit position j (from 0 to n-1). 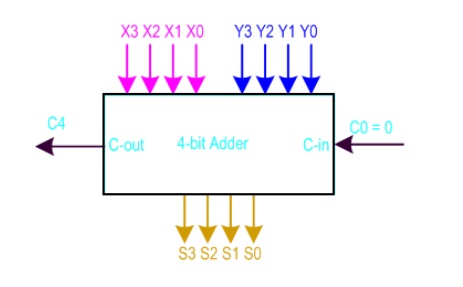 The delay generated by an N-bit adder is proportional to the length N of the two numbers X and Y that are added because the carry signals have to propagate from one full-adder to the next. For large values of N, the delay becomes unacceptably large so that a special solution needs to be adopted to accelerate the calculation of the carry bits. This solution involves a "look-ahead carry generator" which is a block that simultaneously calculates all the carry bits involved. Once these bits are available to the rest of the circuit, each individual three-bit addition (Xi+Yi+carry-ini) is implemented by a simple 3-input XOR gate. The design of the look-ahead carry generator involves two Boolean functions named Generate and Propagate. For each input bits pair these functions are defined as: Gi = Xi . Yi & Pi = Xi + Yi

The carry bit c-out(i) generated when adding two bits Xi and Yi is '1' if the corresponding function Gi is '1' or if the c-out(i-1)='1' and the function Pi = '1' simultaneously. In the first case, the carry bit is activated by the local conditions (the values of Xi and Yi). In the second, the carry bit is received from the less significant elementary addition and is propagated further to the more significant elementary addition. Therefore, the carry_out bit corresponding to a pair of bits Xi and Yi is calculated according to the equation:

The set of equations above are implemented by the circuit below and a complete adder with a look-ahead carry generator is next. The input signals need to propagate through a maximum of 4 logic gate in such an adder as opposed to 8 and 12 logic gates in its counterparts illustrated earlier. 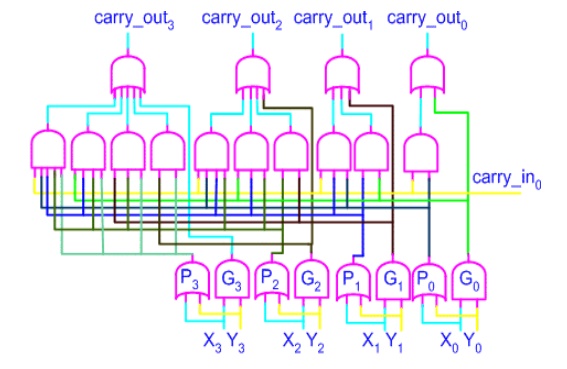 Sums can be calculated from the following equations, where carry_out is taken from the carry calculated in the above circuit. 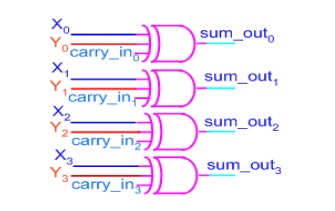 BCD addition is the same as binary addition with a bit of variation: whenever a sum is greater than 1001, it is not a valid BCD number, so we add 0110 to it, to do the correction. This will produce a carry, which is added to the next BCD position.

· Determine if the sum of this addition is greater than 1001; if yes, then add 0110 to this sum and generate a carry to the next decimal position

of Adder). The BORROW output here specifies whether a ‗1‘ has been borrowed to theperform subtraction.

There are two types of subtractors,

The half-subtractor is a combinational circuit which is used to perform subtraction of two bits. It has two inputs, X (minuend) and Y (subtrahend) and two outputs D (difference) and B (borrow). The logic symbol and truth table are shown below.

From the above table we can draw the K-map as shown below for "difference" and "borrow". The Boolean expression for the difference and Borrow can be written. 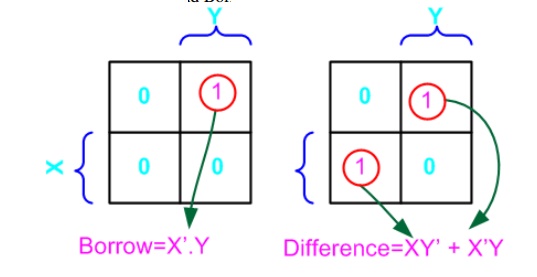 From the equation we can draw the half-subtractor as shown in the figure below. 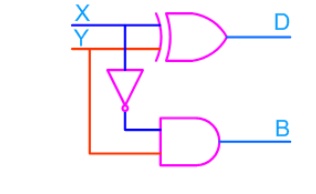 minuend, subtrahend, and borrow-in. There are two outputs, namely the DIFFERENCE output D and the BORROW output Bo. The BORROW output bit tells whether the minuend bit needs to borrow a

from the next possible higher minuend bit. The logic symbol and truth table are shown below. 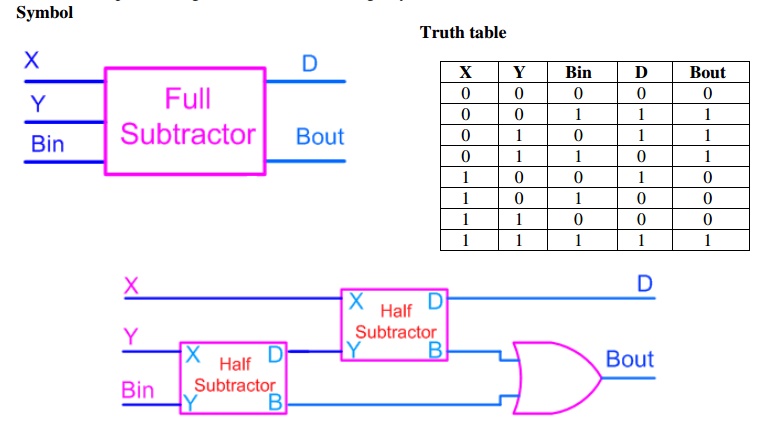 From the above expression, we can draw the circuit below. If you look carefully, you will see that a full-subtractor circuit is more or less same as a full-adder with slight modification. 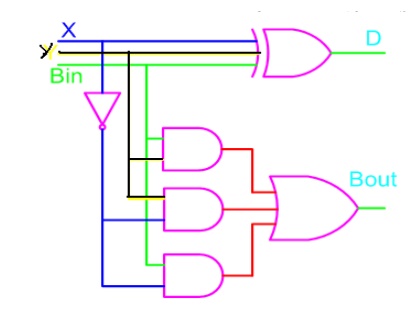 Below is the block level representation of a 4-bit parallel binary subtractor, which subtracts 4-bit Y3Y2Y1Y0 from 4-bit X3X2X1X0. It has 4-bit difference output D3D2D1D0 with borrow output Bout.

It  is a combinational circuit that compares two numbers and determine their relative magnitude. The output of comparator is usually 3 binary variables indicating:

1-bit comparator: Let’sbegin with 1 bit comparator and from the name we can easily make out that this circuit would be used to compare 1 bit binary numbers. 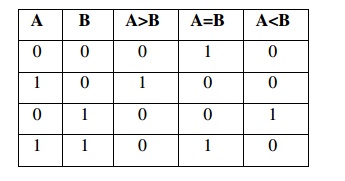 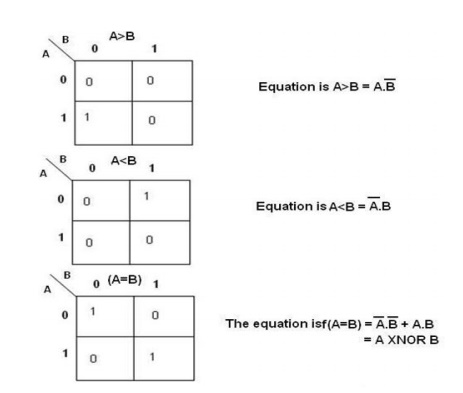 The comparison process of two positive numbers X and Y is performed in a bit-by-bit manner starting with the most significant bit:

If the most significant bits are Xn='1' and Yn='0' then number X is larger than Y. 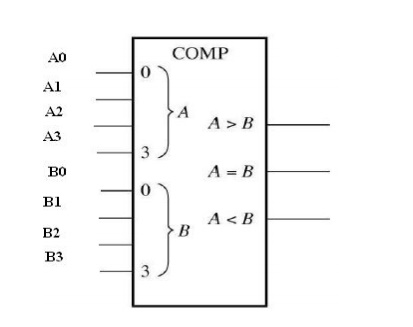 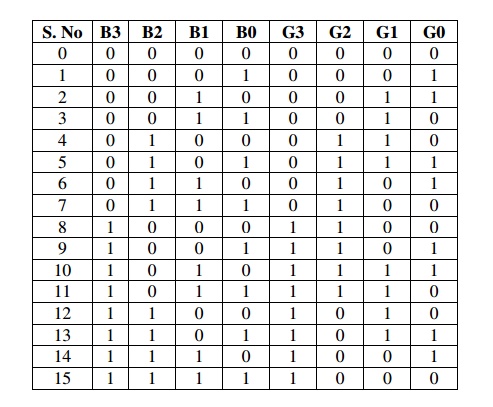 A decoder circuit can be used to implement AND-OR circuit SOP Boolean expression when decoder active state output is 1 and inactive 0 .

• Number of binary outputs = 2n = Maximumumber n of minterms, where n is the number of literals in F 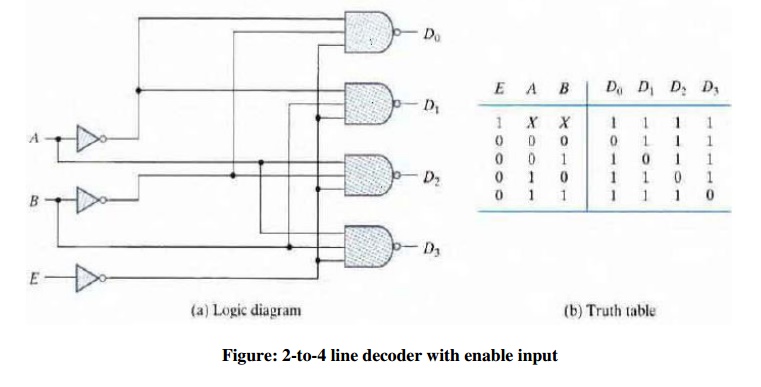 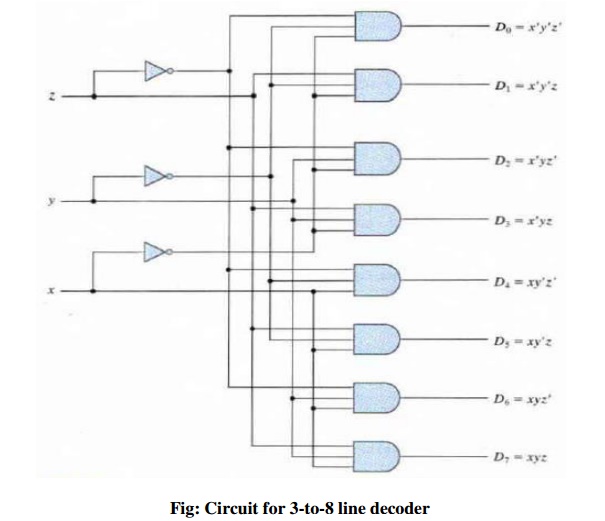 An encoder is a circuit that converts the binary information from one form to another. Gives a unique combination of outputs according to the information at a unique input at one-line (or at multiple lines).

differentiated from decoder by greater number of inputs than outputs compared to the decoder. The priority encoder includes a priority function. 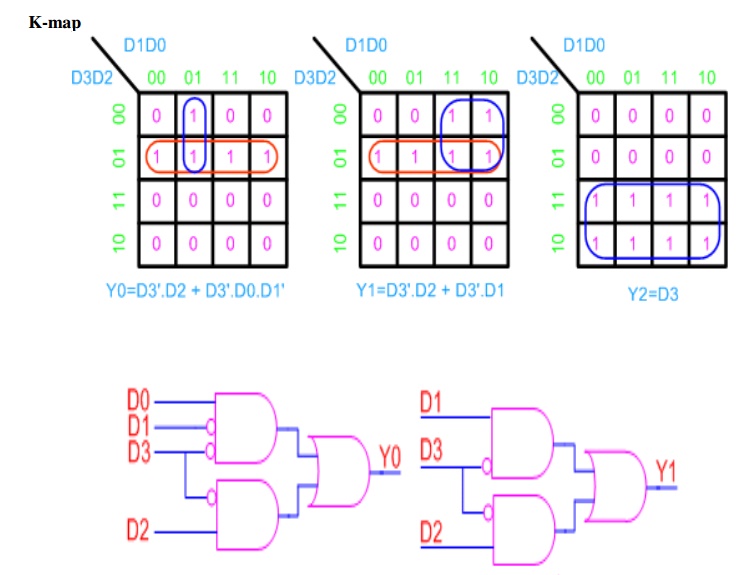 Many tasks in communications, control, and computer systems can be performed by combinational logic circuits. When a circuit has been designed to perform some task in one application, it often finds use in a different application as well.

A multiplexer (MUX) is a digital switch which connects data from one of n sources to the output. A number of select inputs determine which data source is connected to the output. The block diagram of MUX with n data sources of b bits wide and s bits wide select line is shown in below figure. 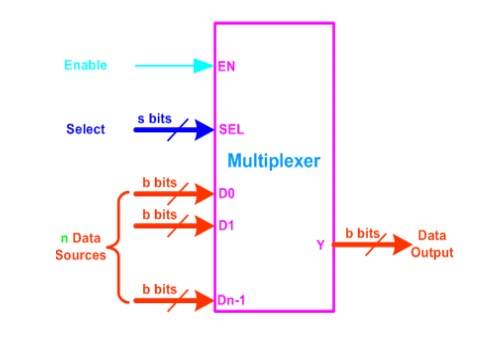 A 2 to 1 line multiplexer is shown in figure below, each 2 input lines A to B is applied to one input of an AND gate. Selection lines S are decoded to select a particular AND gate. The truth table for the 2:1 mux is given in the table below. 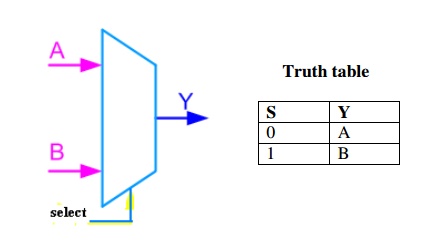 Combining the two 1' as shown in figure, we can drive the output y as shown below 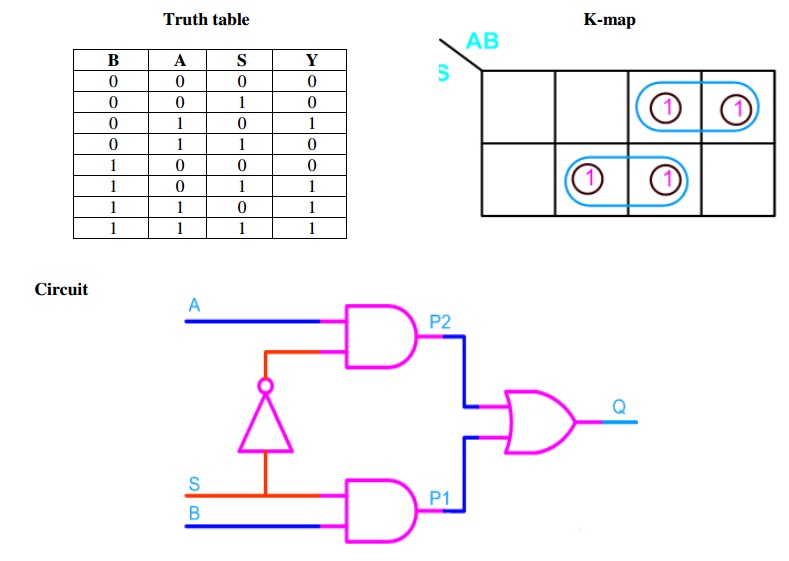 A 4 to 1 line multiplexer is shown in figure below, each of 4 input lines I0 to I3 is applied to one input of an AND gate. Selection lines S0 and S1 are decoded to select a particular AND gate. The truth table for the 4:1 mux is given in the table below. 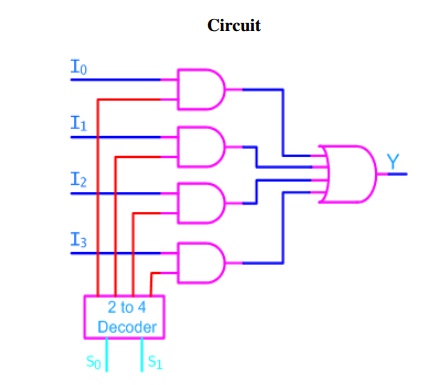 They are digital switches which connect data from one input source to one of n outputs. Usually implemented by using n-to-2n binary decoders where the decoder enable line is used for data input of the de-multiplexer.

The figure below shows a de-multiplexer block diagram which has got s-bits-wide select input, one b-bits-wide data input and n b-bits-wide outputs. 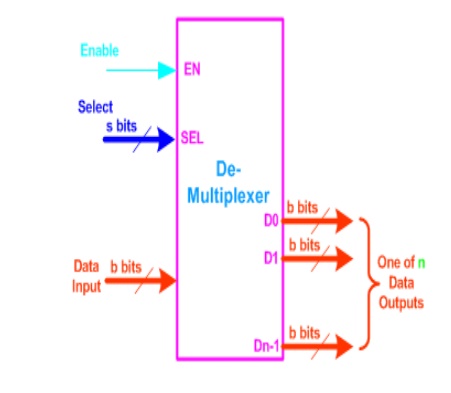 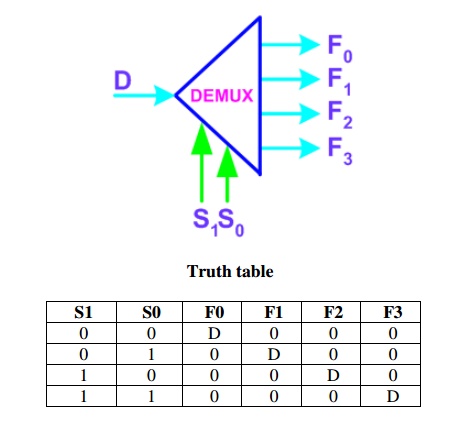 Example: Design a circuit to distinguish BCD digits ≥ 5 from those < 5. 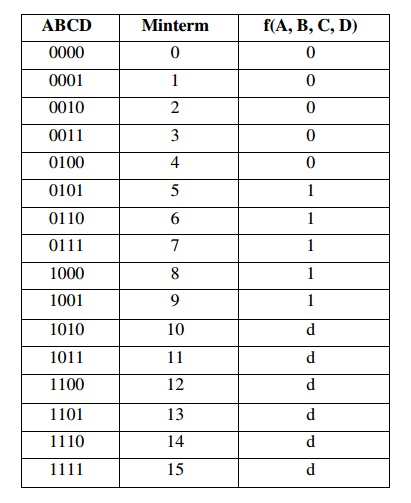 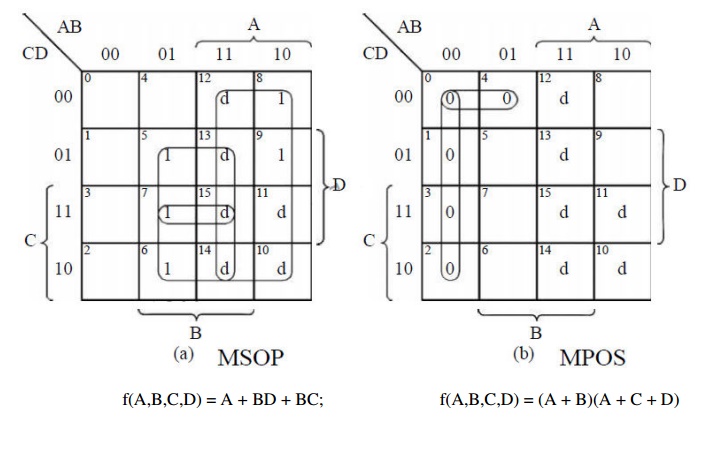