Inhibition of AChE slows or prevents the degradation of ACh released at synapses, and this can greatly prolong the activation of cholinoreceptors produced by synapti-cally released ACh.

Inhibition of AChE slows or prevents the degradation of ACh released at synapses, and this can greatly prolong the activation of cholinoreceptors produced by synapti-cally released ACh. In a functional sense, the indirect cholinomimetic effect of AChE inhibitors is more selec-tive than the effect of directly acting cholinomimetics, because the inhibitors of AChE increase the activation of cholinoreceptors only at active cholinergic synapses. This permits strengthening of the phasic stimulation of synaptically activated cholinoreceptors rather than the persistent activation by directly acting cholinomimetics. At therapeutic concentrations, inhibitors of AChE do not activate cholinoreceptors at sites that do not receive cholinergic synaptic input, such as endothelial mus-carinic receptors, and therefore do not present the same risk of eliciting large vasodilator responses.

Acetylcholinesterase can be inhibited by two gen-eral mechanisms. In the first mechanism, positively charged quaternary ammonium compounds bind to the anionic site and prevent ACh from binding—a simple competitive inhibition. In the second mechanism, the agents act either as a false substrate for the cho-linesterase or directly attack the esteratic site; in both cases they covalently modify the esteratic site and non-competitively prevent further hydrolytic activity. Either mechanism can be effective in preventing the hydroly- sis of ACh, but they differ markedly in their pharmaco-kinetic properties.

Inhibition of AChE can increase the stimulation of both muscarinic and nicotinic receptors produced by synaptically released ACh. Nicotinic receptors can also be stimulated directly by AChE inhibitors with a qua-ternary ammonium group, and this can potentiate their cholinomimetic effect. Finally, although inhibition of true AChE is most important for potentiating the synaptic activity of ACh, several AChE inhibitors also inhibit the pseudo-ChE in plasma. This can permit plasma concentrations of ACh to rise markedly and ac-tivate endothelial muscarinic receptors.

Edrophonium (Enlon, Tensilon) and ambenonium (Mytelase) are monoquaternary and bisquaternary am-monium alcohols, respectively. Their positive charge al-lows them to bind to the anionic site at the reactive cen-ter, competitively displacing ACh from the active site without covalent modification of the site. Edrophonium has a very short duration of action, lasting only 5 to 10 minutes, whereas inhibition by ambenonium can last 4 to 8 hours. These drugs have direct agonist activity at nicotinic receptors.

Carbamate anticholinesterase agents are carbamic acid esters that are hydrolyzed by AChE in a manner similar to that of ACh. Carbamates have this general structure:

The clinically useful carbamates generally contain a tertiary or quaternary amine group that can bind non-covalently to the anionic site of the enzyme. The inhibi-tion of AChE by neostigmine (Prostigmin) illustrates the general mechanism. The quaternary ammonium group of neostigmine binds electrostatically to the an-ionic site of the enzyme, thereby orienting the drug. The serine oxygen at the esteratic site of the enzyme then reacts with the carbonyl carbon of neostigmine, just as it did with ACh (Fig. 12.1). However, a carbamylated in-termediate is formed instead of an acetylated one, and this carbamylated enzyme undergoes hydrolysis much more slowly. Whereas the acetylated enzyme is hy-drolyzed nearly instantly, the half-life for hydrolysis of this particular carbamylated intermediate is about an hour. The carbamates generally inhibit pseudo-ChE as well as true AChE, and their suicidal degradation by cholinesterases contributes importantly to terminating their duration of effect. Physostigmine (also called eser-ine) (Antilirium) is a tertiary amine that can inhibit AChE in the CNS, and it can be used in life-threatening cases to treat antimuscarinic poisoning. 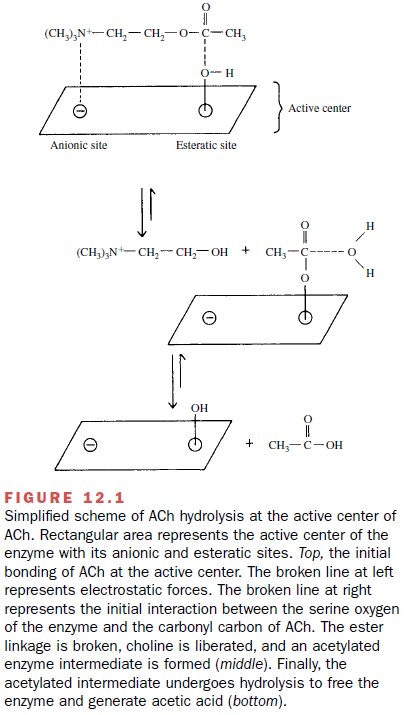 Pyridostigmine (Mestinon) is a quaternary ammo-nium carbamate. Neostigmine and pyridostigmine also have direct agonist activity at nicotinic receptors on skeletal muscle. Rivastigmine (Exelon) is a carbamate cholinesterase inhibitor with good penetration into the brain. 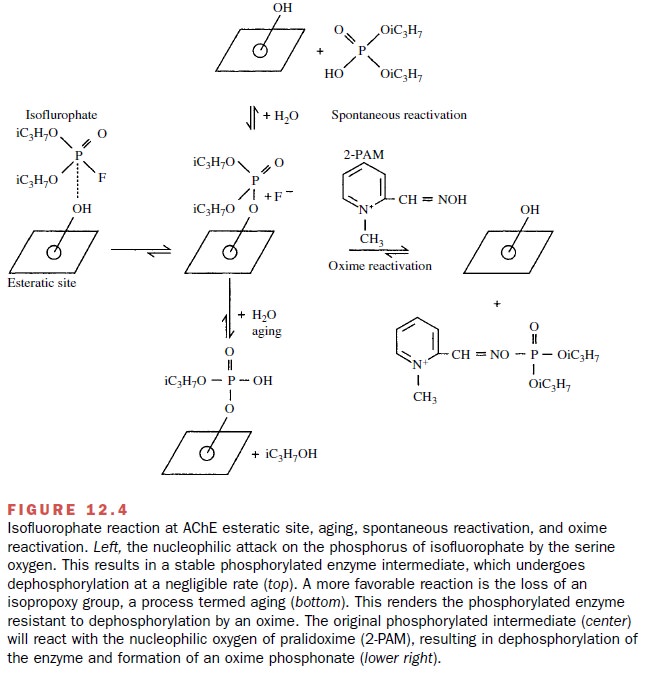 Examples of X groups are fluorine in isoflurophate (Floropryl, no longer available in the United States or Canada) and echothiophate (Phospholine). Parathion and malathion (insecticides) are thiophosphates

that must be converted to oxyanalogues to become ac-tive. The organophosphates, except for echothiophate, are very lipid soluble.

In the interaction of isoflurophate with AChE, a phosphorylated intermediate is formed and fluoride is released.An important characteristic of the organophos-phate-induced inhibition is that the bond between the phosphate and the enzyme is very stable. While the re-generation of most carbamylated enzymes occurs with a half-life of minutes or hours, the recovery of a phospho-rylated enzyme is generally measured in days. These agents are referred to, therefore, as irreversible in-hibitors.

Although the spontaneous hydrolysis of a phospho-rylated enzyme is generally very slow, compounds called oximes can cause dephosphorylation (Fig. 12.4). Pralidoxime chloride (2-PAM) (Protopam chloride) is an oxime used therapeutically to reactivate phosphory-lated AChE. It has the additional feature that its qua-ternary ammonium group binds to the anionic site of the enzyme and thereby promotes dephosphorylation. If the oxime is not administered soon enough (minutes to hours) after AChE has been inhibited, an alkoxy group may be lost from the phosphorylated enzyme. This reaction is called aging. Once aging has occurred, oximes can no longer regenerate free enzymes. The rate of aging appears to depend both on the nature of the enzyme (AChE or pseudo-ChE) and on the particular inhibitor employed. Since pralidoxime is a quaternary amine, it does not cross the blood-brain barrier, and it is not useful for reactivating cholinesterases in the CNS.

Inhibitors targeted at AChE in the CNS

Several inhibitors of AChE have been developed for use in treating Alzheimer’s disease, which requires that the drugs readily enter the CNS. These inhibitors are struc-turally unrelated and vary in their mechanism of inhibi-tion, although all are reversible inhibitors. Tacrine (Cognex) is a monoamine acridine. Donepezil (Aricept) is a piperidine derivative that is a relatively specific in-hibitor of AChE in the brain, with little effect on pseudo-ChE in the periphery. Galanthamine (Reminyl ) is a ter-tiary alkaloid and phenanthrene derivative extracted from daffodil bulbs that is a reversible competitive in-hibitor of AChE; it also acts on nicotinic receptors.

Physostigmine and rivastigmine are tertiary amines that are rapidly absorbed from the gastrointestinal tract, as are tacrine, donepezil, and galanthamine, whereas qua-ternary ammonium compounds are poorly absorbed after oral administration. Nevertheless, quaternary am-monium compounds like neostigmine and pyridostig-mine are orally active if larger doses are employed. Only the quaternary ammonium inhibitors do not read-ily enter the CNS. Because of their high lipid solubility and low molecular weight, most of the organophos-phates are absorbed by all routes of administration; even percutaneous exposure can result in the absorp-tion of sufficient drug to permit the accumulation of toxic levels of these compounds.

Edrophonium is partially metabolized to a glu-curonide conjugate in the liver. Some of this metabolite is excreted in bile. Carbamates undergo both nonenzy-matic and enzymatic hydrolysis, with enzymatic hydrol-ysis generally resulting from an interaction of the drug with the pseudo-ChE in plasma and liver. Organo- phosphates are metabolized to inactive products by hy-drolytic enzymes in the plasma, kidney, liver, and lungs. In contrast, the organophosphate insecticide parathion requires metabolism (oxidative desulfuration) to be-come an effective insecticide.

Metabolites of the cholinesterase inhibitors and in some instances significant amounts of the parent com-pound are eliminated in the urine. Renal excretion is very important in the clearance of agents such as neostigmine, pyridostigmine, and edrophonium. This is demonstrated by a twofold to threefold increase in elimination half-lives for these drugs in anephric pa-tients. Renal elimination is largely the result of glomerular filtration but probably also involves, at least in the case of quaternary amines, secretion via the renal cationic transport system.

Inhibition of AChE potentiates and prolongs the stimu-lation of cholinoreceptors resulting from ACh released at cholinergic synapses (Fig. 12.5). These synapses in-clude those found at the skeletal neuromuscular junc-tion, adrenal medulla, autonomic ganglia, cholinergic neuroeffector junctions of the autonomic nervous sys-tem, and cholinergic synapses in the CNS. The degree and range of effects observed depend on the inhibitor chosen, the dose employed, and the route of exposure or administration. 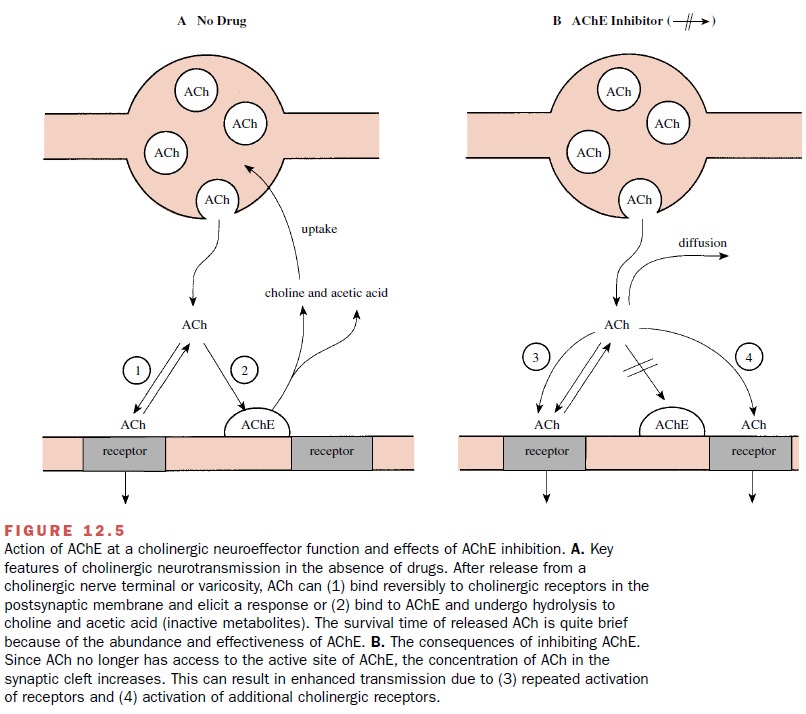 Neuromuscular transmission in skeletal muscle is enhanced by low concentrations of anticholinesterase agents, whereas high concentrations result in choliner-gic blockade. This blockade is initially due to a persis-tent membrane depolarization and inactivation of voltage-gated sodium channels, but if ACh levels remain high, the nicotinic cholinergic receptors can quickly be-come desensitized. Although anticholinesterase agents will facilitate cholinergic transmission at autonomic gan-glia, their action at these sites is less marked than at the neuromuscular junction.

Anticholinesterase agents of all classes can initiate antidromic firing of action potentials in motor neurons, possibly due to an activation of prejunctional ACh re-ceptors that are activated by the elevated synaptic ACh. Quaternary ammonium inhibitors can also act as ago-nists at these receptors. The initiation of antidromic fir-ing may be a mechanism by which cholinesterase in-hibitors produce fasciculation of skeletal muscle.

The actions of anticholinesterase agents on the car-diovascular system are complex. The primary effect pro-duced by potentiation of vagal stimulation is brady-cardia with a consequent decrease in cardiac output and blood pressure.

However, potentiation of both parasympathetic and sympathetic ganglionic transmission, including that in the adrenal medulla, can produce complicated effects on the cardiovascular system, in-cluding vasoconstrictor responses. The activation of re-flexes can also complicate the total cardiovascular re-sponse to cholinesterase inhibitors.