Following are the factors which influences the performance of the machine.

(i)          Iron loss: A high value of flux density in the air gap leads to higher value of flux in the iron parts of the machine which results in increased iron losses and reduced efficiency.

(ii)       Voltage: When the machine is designed for higher voltage space occupied by the insulation becomes more thus making the teeth smaller and hence higher flux density in teeth and core.

(i)    Copper loss: Higher the value of q larger will be the number of armature of conductors which results in higher copper loss. This will result in higher temperature rise and reduction in efficiency.

(ii) Voltage: A higher value of q can be used for low voltage machines since the space required for the insulation will be smaller.

Separation of D and L: Inner diameter and gross length of the stator can be calculated from D2L product obtained from the output equation. To separate suitable relations are assumed between D and L depending upon the type of the generator. Salient pole machines: In case of salient pole machines either round or rectangular pole construction is employed. In these types of machines the diameter of the machine will be quite larger than the axial length.

Classification of insulating materials based on thermal consideration 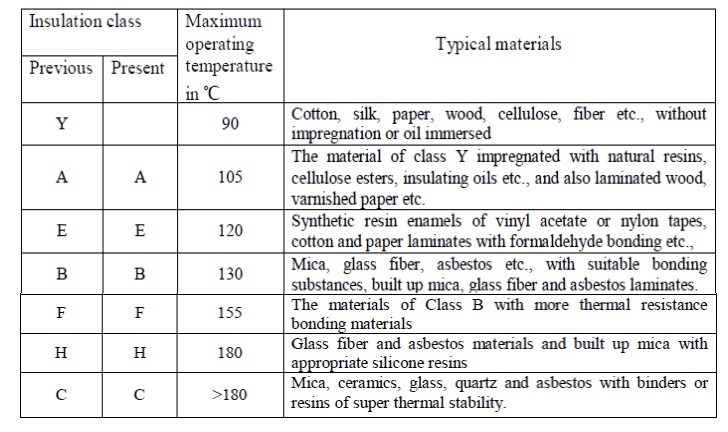 The insulation system (also called insulation class) for wires used in generators, motors transformers and other wire-wound electrical components is divided into different classes according the temperature that they can safely withstand.

As per Indian Standard (Thermal evaluation and classification of Electrical Insulation,IS.No.1271,1985,first revision) and other international standard insulation is classified by letter grades A,E,B,F,H (previous Y,A,E,B,F,H,C).

Insulation is the weakest element against heat and is a critical factor in deciding the life of electrical equipment. The maximum operating temperatures prescribed for different class of insulation are for a healthy lifetime of 20,000 hours. The height temperature permitted for the machine parts is usually about 2000C at the maximum. Exceeding the maximum operating temperature will affect the life of the insulation. As a rule of thumb, the lifetime of the winding insulation will be reduced by half for every 10 ºC rise in temperature. The present day trend is to design the machine using class F insulation for class B temperature rise.