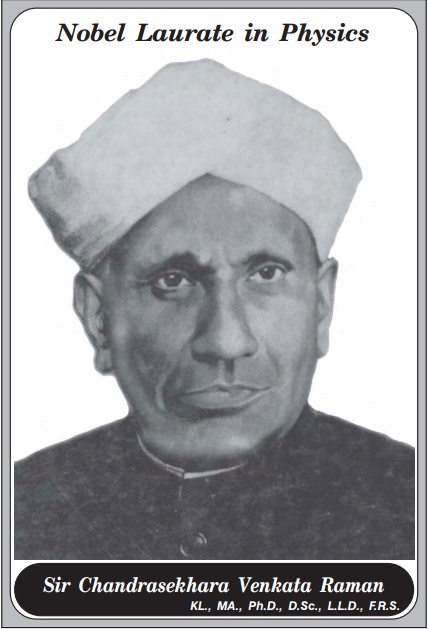 Chandrasekhara Venkata Raman(C.V.Raman) was born at Thiruchirapalli in Tamilnadu on 7th November, 1888. His father Mr.R.Chandrasekara Iyer was a teacher.

Chandrasekhara Venkata Raman was born at Thiruchirapalli in Tamilnadu on 7th November, 1888. His father Mr.R.Chandrasekara Iyer was a teacher. Venkata Raman had his school education at Vizagapatnam, as his father worked as a lecturer in Physics at that place. He completed his B.A., degree with distinction in Presidency College, Chennai in 1904. Venkata Raman continued his post-graduation in the same college and passed the M.A., degree examination in January 1907 securing a first class and obtaining record marks in his subjects.

Raman appeared for the finance examination in February 1907 and again secured the first place. He began his life as an Assistant Accountant General in Calcutta in June 1907. Eventhough, Raman worked as an officer in finance department, he spent the morning and evening hours, out of office hours in Physics laboratories. He converted a part of his house as a laboratory and worked with improvised apparatus. Raman left Government Service in July 1917 and joined as a Professor of Physics in the University of Calcutta. The British Government knighted him in 1929 as 'Sir,' but he did not like the use of 'Sir' before his name.

The discovery of the Raman effect was not an accident, but was the result of prolonged and patient research extending over a period of nearly seven years. These researches began in the summer of 1921. When, during the voyage made on the occasion of his first visit to Europe, Raman's attention was attracted to the beautiful blue colour exhibited by the water of the deep sea. On his return to India, he started a series of experimental and theoretical studies on scattering of light by the molecules of transparent media such as air, water or ice and quartz. The experiment of Professor Raman revealed that the scattered light is different from the incident light. This led to the discovery of a new effect. For his investigation on the scattering of light and the discovery of the effect known after him, Raman effect, Nobel Prize was awarded to Raman on 10th December, 1930.

Sir. C.V. Raman joined the Indian Institute of Science and Technology, Bangalore as its first Indian director in 1933. He established a research laboratory known as Raman Institute in 1943. He continued his research, until death put a full stop to his activities at the age of 82.