Numerical analysis is usually described as the branch of computer science con-cerned with algorithms for solving mathematical problems.

Numerical analysis is usually described as the branch of computer science con-cerned with algorithms for solving mathematical problems. This description needs an important clarification: the problems in question are problems of “continuous” mathematics—solving equations and systems of equations, evaluating such func-tions as sin x and ln x, computing integrals, and so on—as opposed to problems of discrete mathematics dealing with such structures as graphs, trees, permutations, and combinations. Our interest in efficient algorithms for mathematical problems stems from the fact that these problems arise as models of many real-life phe-nomena both in the natural world and in the social sciences. In fact, numerical analysis used to be the main area of research, study, and application of computer science. With the rapid proliferation of computers in business and everyday-life applications, which deal primarily with storage and retrieval of information, the relative importance of numerical analysis has shrunk in the last 30 years. However, its applications, enhanced by the power of modern computers, continue to expand in all areas of fundamental research and technology. Thus, wherever one’s inter-ests lie in the wide world of modern computing, it is important to have at least some understanding of the special challenges posed by continuous mathematical problems.

We are not going to discuss the variety of difficulties posed by modeling, the task of describing a real-life phenomenon in mathematical terms. Assuming that this has already been done, what principal obstacles to solving a mathematical problem do we face? The first major obstacle is the fact that most numerical analy-sis problems cannot be solved exactly.4 They have to be solved approximately, and this is usually done by replacing an infinite object by a finite approximation. For example, the value of ex at a given point x can be computed by approximating its infinite Taylor’s series about x = 0 by a finite sum of its first terms, called the nth-degree Taylor polynomial:

To give another example, the definite integral of a function can be approximated by a finite weighted sum of its values, as in the composite trapezoidal rule that you might remember from your calculus class:

The errors of such approximations are called truncation errors. One of the major tasks in numerical analysis is to estimate the magnitudes of truncation 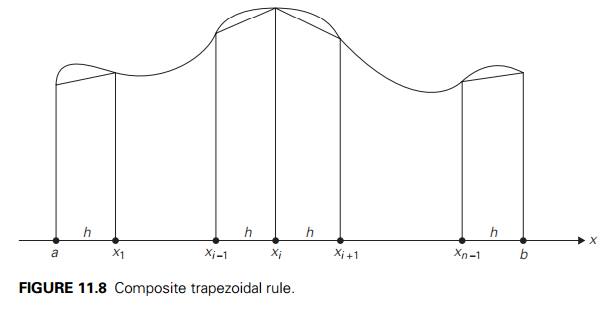 errors. This is typically done by using calculus tools, from elementary to quite advanced. For example, for approximation (11.6) we have

where M = max eξ on the segment with the endpoints at 0 and x. This formula makes it possible to determine the degree of Taylor’s polynomial needed to guar-antee a predefined accuracy level of approximation (11.6).

to see that the smallest value of n for which this inequality holds is 5.

Similarly, for approximation (11.7), the standard bound of the truncation error is given by the inequality

The other type of errors, called round-off errors, are caused by the limited accuracy with which we can represent real numbers in a digital computer. These errors arise not only for all irrational numbers (which, by definition, require an infinite number of digits for their exact representation) but for many rational numbers as well. In the overwhelming majority of situations, real numbers are represented as floating-point numbers,

where B is the number base, usually 2 or 16 (or, for unsophisticated calculators,

its mantissa; and E is an integer exponent with the range of values approximately symmetric about 0.

As with an approximation of any kind, it is important to distinguish between the absolute error and the relative error of representing a number α∗ by its approximation α:

(The relative error is undefined if α∗ = 0.)

Very large and very small numbers cannot be represented in floating-point arithmetic because of the phenomena called overflow and underflow, respec-tively. An overflow happens when an arithmetic operation yields a result out-side the range of the computer’s floating-point numbers. Typical examples of overflow arise from the multiplication of large numbers or division by a very small number. Sometimes we can eliminate this problem by making a simple change in the order in which an

Underflow occurs when the result of an operation is a nonzero fraction of such a small magnitude that it cannot be represented as a nonzero floating-point number. Usually, underflow numbers are replaced by zero, but a special signal is generated by hardware to indicate such an event has occurred.

It is important to remember that, in addition to inaccurate representation of numbers, the arithmetic operations performed in a computer are not always exact, either. In particular, subtracting two nearly equal floating-point numbers may cause a large increase in relative error. This phenomenon is called subtractive cancellation.

which is very large for a relative error despite quite accurate approximations for both α and β.

Note that we may get a significant magnification of round-off error if a low-accuracy difference is used as a divisor. (We already encountered this problem in discussing Gaussian elimination in Section 6.2. Our solution there was to use partial pivoting.) Many numerical algorithms involve thousands or even millions of arithmetic operations for typical inputs. For such algorithms, the propagation of round-off errors becomes a major concern from both the practical and theoretical standpoints. For some algorithms, round-off errors can propagate through the algorithm’s operations with increasing effect. This highly undesirable property of a numerical algorithm is called instability. Some problems exhibit such a high level of sensitivity to changes in their input that it is all but impossible to design a stable algorithm to solve them. Such problems are called ill-conditioned.

Its only solution is x = 1, y = 1. To see how sensitive this system is to small changes to its right-hand side, consider the system with the same coefficient matrix but slightly different right-hand side values:

The only solution to this system is x = 2, y = 0, which is quite far from the solution to the previous system. Note that the coefficient matrix of this system is close to being singular (why?). Hence, a minor change in its coefficients may yield a system with either no solutions or infinitely many solutions, depending on its right-hand-side values. You can find a more formal and detailed discussion of how we can measure the degree of ill-condition of the coefficient matrix in numerical analysis textbooks (e.g., [Ger03]). 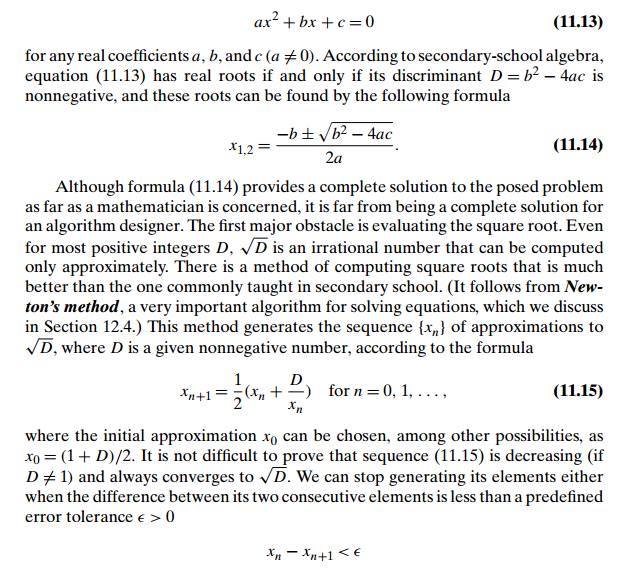 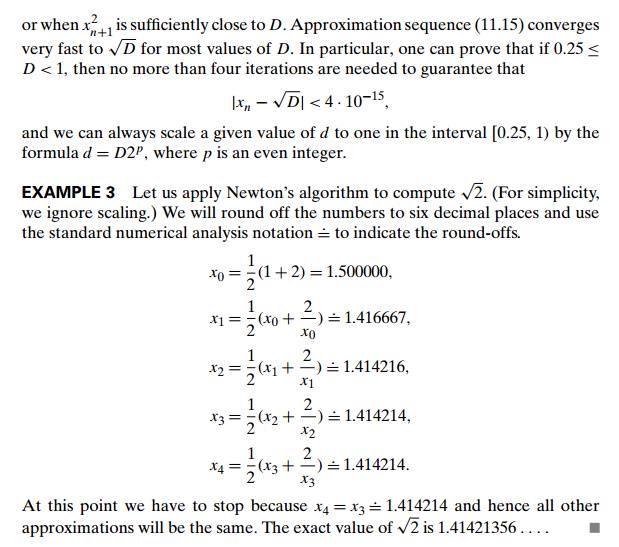 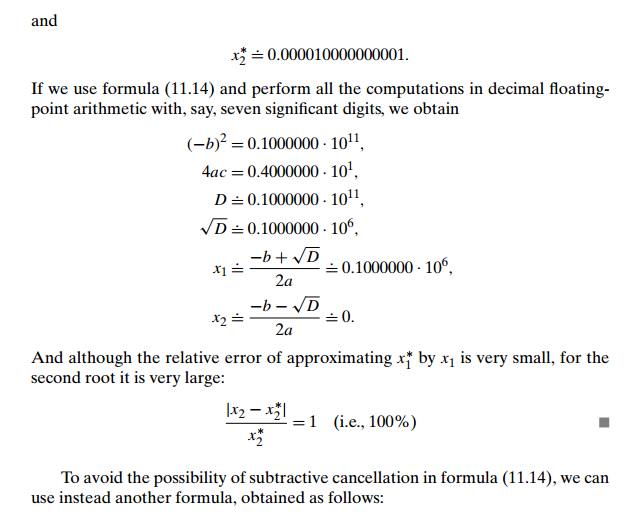 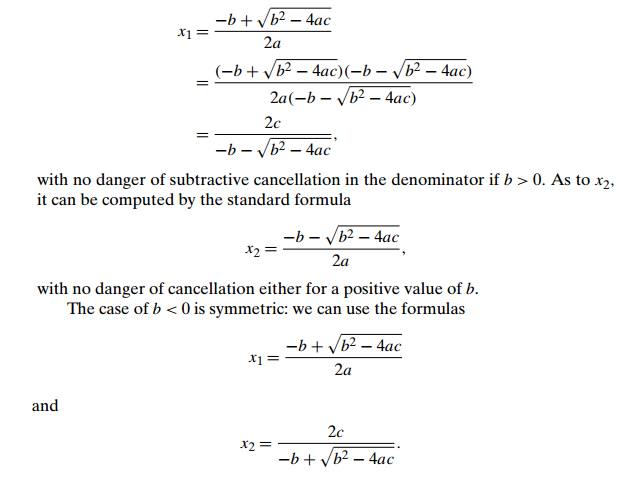 (The case of b = 0 can be considered with either of the other two cases.)

There are several other obstacles to applying formula (11.14), which are re-lated to limitations of floating-point arithmetic: if a is very small, division by a can cause an overflow; there seems to be no way to fight the danger of subtractive cancellation in computing b2 − 4ac other than calculating it with double precision; and so on. These problems have been overcome by William Kahan of the Univer-sity of Toronto (see [For69]), and his algorithm is considered to be a significant achievement in the history of numerical analysis.

Hopefully, this brief overview has piqued your interest enough for you to seek more information in the many books devoted exclusively to numerical algorithms. In this book, we discuss one more topic in the next chapter: three classic methods for solving equations in one unknown.

According to this definition, how many significant digits are there in the approximation of π by

If α = 1.5 is known to approximate some number α∗ with the absolute error not exceeding 10−2, find

the range of possible values of α∗.

the range of the relative errors of these approximations. 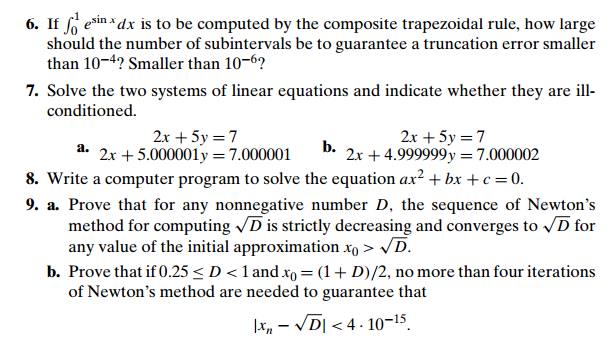 Given a class of algorithms for solving a particular problem, a lower bound indicates the best possible efficiency any algorithm from this class can have.

A trivial lower bound is based on counting the number of items in the problem’s input that must be processed and the number of output items that need to be produced.

An information-theoretic lower bound is usually obtained through a mecha-nism of decision trees. This technique is particularly useful for comparison-based algorithms for sorting and searching. Specifically:

Any general comparison-based algorithm for searching a sorted array must perform at least log2(n + 1) key comparisons in the worst case.

The adversary method for establishing lower bounds is based on following the logic of a malevolent adversary who forces the algorithm into the most time-consuming path.

A lower bound can also be established by reduction, i.e., by reducing a problem with a known lower bound to the problem in question.

Complexity theory seeks to classify problems according to their computational complexity. The principal split is between tractable and intractable problems

problems that can and cannot be solved in polynomial time, respectively. For purely technical reasons, complexity theory concentrates on decision problems, which are problems with yes/no answers.

The halting problem is an example of an undecidable decision problem; i.e., it cannot be solved by any algorithm.

Many important problems in NP (such as the Hamiltonian circuit problem) are known to be NP-complete: all other problems in NP are reducible to such a problem in polynomial time. The first proof of a problem’s NP-completeness was published by S. Cook for the CNF-satisfiability problem.

It is not known whether P = NP or P is just a proper subset of NP. This question is the most important unresolved issue in theoretical computer science. A discovery of a polynomial-time algorithm for any of the thousands of known NP-complete problems would imply that P = NP.

Numerical analysis is a branch of computer science dealing with solving continuous mathematical problems. Two types of errors occur in solving a majority of such problems: truncation error and round-off error. Truncation errors stem from replacing infinite objects by their finite approximations.

Round-off errors are due to inaccuracies of representing numbers in a digital computer.

Subtractive cancellation happens as a result of subtracting two near-equal floating-point numbers. It may lead to a sharp increase in the relative round-off error and therefore should be avoided (by either changing the expression’s form or by using a higher precision in computing such a difference).

Writing a general computer program for solving quadratic equations ax2 + bx + c = 0 is a difficult task. The problem of computing square roots can be solved by utilizing Newton’s method; the problem of subtractive cancellation can be dealt with by using different formulas depending on whether coefficient b is positive or negative and by computing the discriminant b2 − 4ac with double precision.