The cephalosporins are semisynthetic antibiotics derived from products of various microorganisms, including Cephalosporium and Streptomyces. 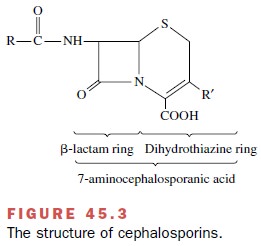 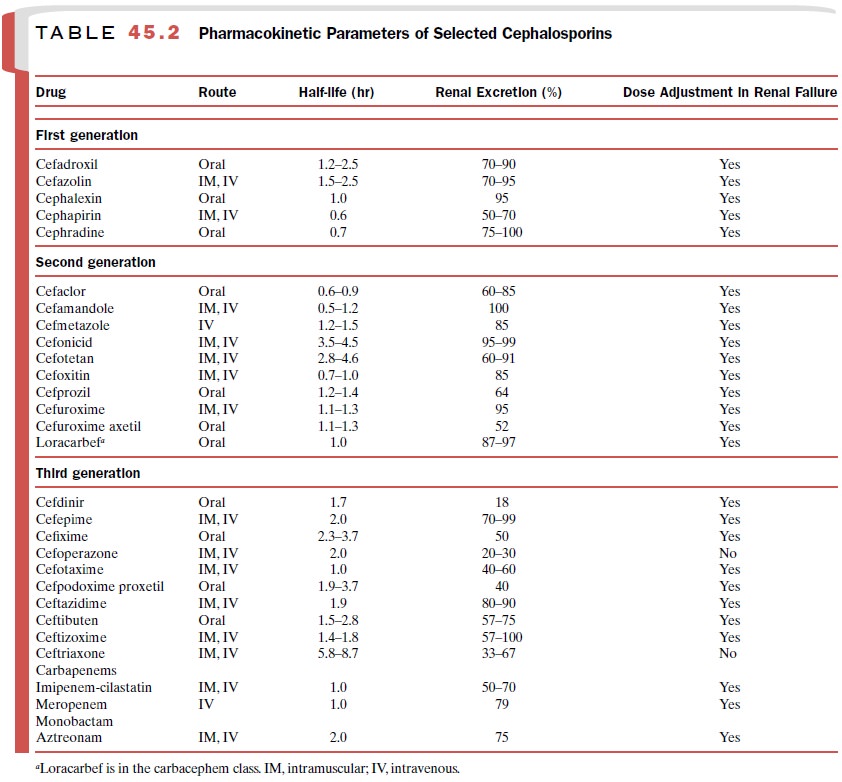 The distinction between third and fourth generation may be irrelevant, however, since clinical outcomes are similar in human trials comparing ce-fepime and other third-generation cephalosporins. None of the cephalosporins adequately treats infections caused by Enterococcus faecalis, E. faecium, MRSA, or L. monocytogenes.

Most parenteral cephalosporins have good bioavailabil-ity after intramuscular injection, and a few members of each cephalosporin generation have good oral bioavail-ability (Table 45.2). The ester prodrugs cefuroxime ax-etil (Ceftin) and cefpodoxime proxetil (Vantin) are oral formulations in which the ester is hydrolyzed during drug passage through the intestinal mucosa; the free cephalosporin enters the systemic circulation. Con-comitant ingestion of food reduces the bioavailability of some cephalosporins, e.g., cefaclor (Ceclor), and there-fore, these compounds should be administered on an empty stomach.

The cephalosporins distribute in satisfactory con-centrations to most tissues except the central nervous system. Only cefepime, cefuroxime (Zinacef), cefo-taxime (Claforan), ceftriaxone (Rocephin), and cef-tazidime (Fortaz) achieve therapeutic concentrations in cerebrospinal fluid. Cefotaxime and ceftriaxone are an-tibiotics of first choice for the empirical treatment of brain abscess and meningitis.

There is considerable variation in the protein bind-ing among the cephalosporins. Drugs like ceftriaxone that have extensive protein binding (85–95%) may dis-place bilirubin from serum albumin. Consequently, cef-triaxone may increase the risk of kernicterus in jaun-diced neonates.

The cephalosporins have good safety profiles. The overall incidence of adverse events attributed to cephalosporins is between 1 and 10%. The most common adverse drug reactions are rashes (1–5%), eosinophilia (3–10%), gas-trointestinal symptoms (3%), hematological abnormali-ties (1–2%), phlebitis (2%), and fever ( 1%). Ana-phylactic reactions to cephalosporins are rare ( 0.02%).

Because of cross-reactions between cephalosporins and penicillins, caution should be used when prescribing cephalosporins to patients with penicillin allergy. If a patient had anaphylaxis, angioedema, or urticaria fol-

The cephalosporins are valuable because of their broad spectrum of antimicrobial activity. However, their bactericidal action alters gut flora and selects for overgrowth of resistant organisms. Cephalosporins have been associated with superinfections with Clostridium difficile, enterococci, MRSA, coagulase-negative staphylococci, P. aeruginosa, and Candida albi-cans. Overgrowth by toxigenic C. difficile occasionally causes pseudomembranous colitis in patients treated with cephalosporins. Some third-generation cepha-losporins induce production of extended-spectrum β-lactamases (ESBLs) in P. aeruginosa. The ESBLs can transfer to various Enterobacteriaceae and produce or-ganisms resistant to almost all β-lactam antibiotics.

Bleeding is an uncommon but serious side effect of some cephalosporins. The N-methylthiotetrazole (MTT) side chain on the R substituent inhibits production of active vitamin K. Cephalosporins with the MTT side chain (cefamandole, cefmetazole, cefoperazone, cefote-tan) are associated with hypoprothrombinemia, coagu-lation abnormalities, and bleeding. In addition, the MTT cephalosporins increase the effect of oral antico-agulants. Bleeding or coagulation abnormalities caused by MTT cephalosporins can be treated or prevented with supplemental vitamin K. Additional bleeding problems may result from antiplatelet effects. The MTT side chain confers a structure and activity similar to that of disulfiram, so patients taking MTT cephalosporins who also ingest alcohol may develop symptoms similar to the disulfiram reaction.

Children and adults receiving high doses of ceftriax-one may develop gallbladder sludge (pseudolithiasis). While most patients with sludge have no symptoms, oc-casionally the sludge identified by abdominal ultra-sonography has led to laparotomy. Biliary sludge usu-ally disappears after discontinuation of ceftriaxone.