The penicillins are a large group of bactericidal com-pounds. They can be subdivided and classified by their chemical structure and spectrum of activity.

The penicillins are a large group of bactericidal com-pounds. They can be subdivided and classified by their chemical structure and spectrum of activity. The struc-ture common to all penicillins is a β-lactam ring fused with a thiazolidine nucleus (Fig. 45.1). The antimicrobial activity of penicillin resides in the β-lactam ring. Splitting of the β-lactam ring by either acid hydrolysis or β-lactamases results in the formation of penicilloic acid, a product without antibiotic activity. Addition of various side chains (R) to the basic penicillin molecule creates classes of compounds with the same mechanism of action as penicillin but with different chemical and biological properties. For example, some analogues are resistant to hydrolysis by acid or β-lactamase; some have an extended the spectrum of antibacterial activity; and others show improved absorption from the intes-tinal tract. 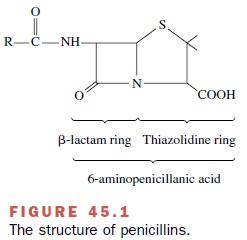 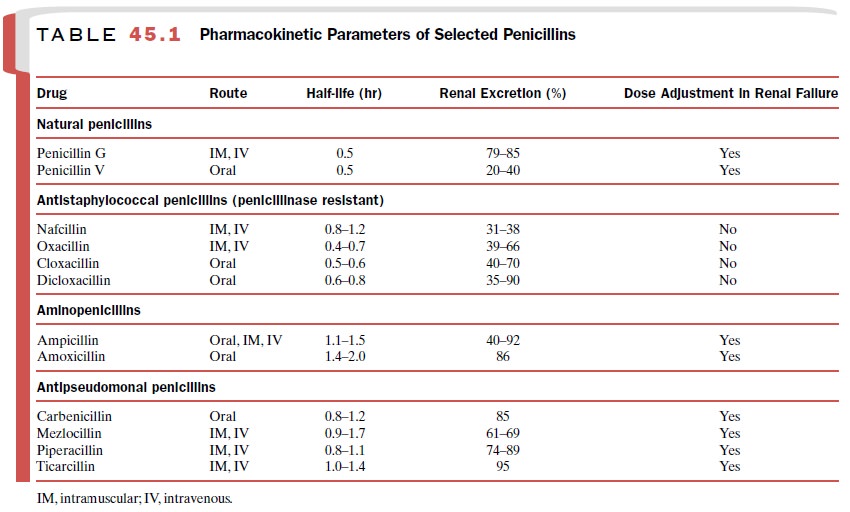 When prescribing one of the penicillin G depot for-mulations, practitioners must individualize treatment to clinical and microbial conditions. Some long-acting for-mulations may not maintain adequate plasma and tissue concentrations to treat specific organisms or infections. For acute streptococcal meningitis, the goal is rapid achievement of high antibiotic concentrations in the cerebrospinal fluid. Consequently, depot formulations are inappropriate for meningitis. Intravenous penicillin G is among the antibiotics of first choice for therapy of meningitis caused by susceptible S. pneumoniae. In con-trast, a depot formulation of benzathine penicillin G suffices for rheumatic fever prophylaxis.

Nafcillin, oxacillin, cloxacillin, and dicloxacillin are more resistant to bacterial β-lactamases than is penicillin G. Consequently, these antibiotics are effective against streptococci and most community-acquired penicilli-nase-producing staphylococci. Methicillin, which is no longer marketed in the United States, is another peni-cillinase-resistant antibiotic similar to nafcillin and oxacillin. For historical reasons, staphylococci resistant to oxacillin or nafcillin are labeled methicillin resistant. Many hospitals are reservoirs for MRSA and methi-cillin-resistant Staphylococcus epidermidis (MRSE). These nosocomial pathogens are resistant in vitro to all β-lactam antibiotics.

For oral therapy, cloxacillin and dicloxacillin are comparable alternatives. Both undergo hepatic metabo-lism, and neither drug requires dose adjustment in pa-tients with hepatic insufficiency. Additional pharmaco-kinetic data are in Table 45.1. Indications for cloxacillin or dicloxacillin include clinically mild staphylococcal in-fections like impetigo.

The pharmacokinetics of ampicillin and amoxicillin are similar (Table 45.1). Both have good oral bioavailabil-ity; ampicillin is also bioavailable after intramuscular injection. Concomitant ingestion of food decreases the bioavailability of ampicillin but not amoxicillin. Consequently, oral doses of ampicillin should be given on an empty stomach. Ampicillin achieves therapeutic concentrations in the cerebrospinal fluid only during in-flammation. Therefore, ampicillin is effective treatment for meningitis caused by Listeria monocytogenes. Amoxicillin does not reach adequate concentrations in the central nervous system and is not appropriate for meningitis therapy. Other indications for ampicillin in-clude serious infections like enterococcal endocarditis and pneumonia caused by β-lactamase-negative H. in-fluenzae. Amoxicillin oral therapy is appropriate for clinically acute nonserious bacterial infections like otitis media and sinusitis. Amoxicillin also has use in mul-tidrug regimens for the eradication of Helicobacter py-lori in duodenal and gastric ulcers.

Mezlocillin, piperacillin, and ticarcillin are parenteral antibiotics formulated as sodium salts, so prescribers must consider the sodium content of these antibiotics when administering them to patients with congestive heart failure. During their distribution phase, an-tipseudomonal penicillins achieve only low concentra-tions in the cerebrospinal fluid. Consequently, an-tipseudomonal penicillins are not among the drugs of first choice for meningitis therapy.

The antipseudomonal penicillins have comparable spectra of activity against many gram-positive and gram-negative pathogens, including most anaerobes. Mezlocillin, piperacillin, and ticarcillin have similar clin-ical outcomes in patients with known or suspected P. aeruginosa infections. Antipseudomonal penicillins are used to treat pneumonias associated with cystic fibrosis or mechanical ventilation.

All of the penicillin antibiotics are classified by the U. S. Food and Drug Administration (FDA) in pregnancy category B, that is, as drugs having either no fetal risk in animal studies but human trials are inadequate, or animal studies show adverse fetal effects but well-controlled human trials reveal no fetal damage. Obstetricians frequently prescribe ampicillin, penicillin G, and penicillin V because they are effective against the infections most frequently encountered in caring for pregnant women (e.g., upper respiratory and lower uri-nary tract infections).

While being associated with a low percentage of ad-verse reactions, the β-lactams are the most frequent source of troublesome allergic reactions among the an-tibiotics. The overall frequency of adverse effects asso-ciated with penicillin use is less than 10%, including al-lergic and other reactions. Anaphylaxis is a serious, rare allergic response with an occurrence rate between 0.004% and 0.015% of penicillin courses. Allergic reactions to penicillin are immediate immunoglobulin (Ig) E–mediated type I immune responses. Symptoms and signs of IgE-mediated reactions may include ur-ticaria, pruritus, bronchospasm, angioedema, laryngeal edema, and hypotension. Late onset immune-mediated reactions to β-lactam antibiotics may manifest as eosinophilia, hemolytic anemia, interstitial nephritis, or serum sickness. In contrast to the rare allergic reactions, nonallergic β-lactam rashes are common. For example, ampicillin is associated with nonurticarial rashes in 5 to 10% of recipients.

The incidence of nonallergic ampicillin eruptions is 40 to 100% in patients with concomitant Epstein-Barr virus (mononucleosis), cytomegalovirus, acute lympho-cytic leukemia, lymphoma, or reticulosarcoma. Non-allergic penicillin-associated rashes are characteristi-cally morbilliform (symmetrical, erythematous, confluent, maculopapular) eruptions on the extremities. The onset of typical nonallergic eruptions is more than 72 hours after β-lactam exposure. The mechanism for the nonurticarial ampicillin rash is not known and is not related to IgE or type I hypersensitivity. Penicillin skin tests are not useful in the evaluation of nonurticarial ampicillin rashes. Patients with a history of nonurticar-ial ampicillin rashes may receive other β-lactam antibi-otics without greater risk of subsequent serious allergic reactions.