The half-lives of many benzodiazepines and barbiturates increase by 50–150% between ages 30 and 70.

The half-lives of many benzodiazepines and barbiturates increase by 50–150% between ages 30 and 70. Much of this change occurs during the decade from 60 to 70. For some of the benzodiaz-epines, both the parent molecule and its metabolites (produced in the liver) are pharmacologically active . The age-related decline in renal function and liver disease, if present, both contribute to the reduction in elimination of these compounds. In addition, an increased volume of distribution has been reported for some of these drugs. Lorazepam and oxazepam may be less affected by these changes than the other benzodiazepines. In addi-tion to these pharmacokinetic factors, it is generally believed that the elderly vary more in their sensitivity to the sedative-hypnotic drugs on a pharmacodynamic basis as well. Among the toxicities of these drugs, ataxia and other signs of motor impairment should be particularly watched for in order to avoid accidents.

The opioid analgesics show variable changes in pharmacokinetics with age. However, the elderly are often markedly more sensitive to the respiratory effects of these agents because of age-related changes in respiratory function. Therefore, this group of drugs should be used with caution until the sensitivity of the particular patient has been evaluated, and the patient should then be dosed appropriately for full effect. Unfortunately, studies show that opi-oids are consistently underutilized in patients who require strong analgesics for chronic painful conditions such as cancer. There is no justification for underutilization of these drugs, especially in the care of the elderly, and good pain management plans are read-ily available (see Morrison, 2006; Rabow, 2011).

The traditional antipsychotic agents (phenothiazines and haloperi-dol) have been very heavily used (and probably misused) in the management of a variety of psychiatric diseases in the elderly. There is no doubt that they are useful in the management of schizophre-nia in old age, and also in the treatment of some symptoms associ-ated with delirium, dementia, agitation, combativeness, and a paranoid syndrome that occurs in some geriatric patients . However, they are not fully satisfactory in these geriatric conditions, and dosage should not be increased on the assumption that full control is possible. There is no evidence that these drugs have any beneficial effects in Alzheimer’s dementia, and on theoretical grounds the antimuscarinic effects of the phe-nothiazines might be expected to worsen memory impairment and intellectual dysfunction .

Much of the apparent improvement in agitated and combative patients may simply reflect the sedative effects of the drugs. When a sedative antipsychotic is desired, a phenothiazine such as thior-idazine is appropriate. If sedation is to be avoided, haloperidol or an atypical antipsychotic is more appropriate. Haloperidol has increased extrapyramidal toxicity, however, and should be avoided in patients with preexisting extrapyramidal disease. The phenothi-azines, especially older drugs such as chlorpromazine, often induce orthostatic hypotension because of their α-adrenoceptor-blocking effects. They are even more prone to do so in the elderly. Dosage of these drugs should usually be started at a fraction of that used in young adults.Lithium is often used in the treatment of mania in the aged. Because it is cleared by the kidneys, dosages must be adjusted appropriately and blood levels monitored. Concurrent use of thi-azide diuretics reduces the clearance of lithium and should be accompanied by further reduction in dosage and more frequent measurement of lithium blood levels.

Psychiatric depression is thought to be underdiagnosed and undertreated in the elderly. The suicide rate in the over-65 age group (twice the national average) supports this view. Unfortunately, the apathy, flat affect, and social withdrawal of major depression may be mistaken for senile dementia. Clinical evidence suggests that the elderly are as responsive to antidepressants (of all types) as younger patients but are more likely to experience toxic effects. This factor along with the reduced clearance of some of these drugs underlines the importance of careful dosing and strict atten-tion to the appearance of toxic effects. If a tricyclic antidepressant is to be used, a drug with reduced antimuscarinic effects should be selected, eg, nortriptyline or desipramine (see Table 30–2). To minimize autonomic effects, a selective serotonin reuptake inhibi-tor (SSRI) may be chosen.

Alzheimer’s disease is characterized by progressive impairment of memory and cognitive functions and may lead to a completely vegetative state, resulting in massive socioeconomic disruption, and early death. Prevalence increases with age and may be as high as 20% in individuals over 85. Both familial and sporadic forms have been identified. Early onset of Alzheimer’s disease is associ-ated with several gene defects, including trisomy 21 (chromosome 21), a mutation of the gene for presenilin-1 on chromosome 14, and an abnormal allele, ε4, for the lipid-associated protein, ApoE, on chromosome 19. Unlike the normal form, ApoE ε2, the ε4 form facilitates the formation of amyloid β deposits.

Pathologic changes include increased deposits of amyloid β peptide in the cerebral cortex, which eventually forms extracellular plaques and cerebral vascular lesions, and intraneuronal fibrillary tangles consisting of the tau protein (Figure 60–2). There is a progressive loss of neurons, especially cholinergic neurons, and thinning of the cortex. The loss of cholinergic neurons results in a marked decrease in choline acetyltransferase and other markers of cholinergic activity. Patients with Alzheimer’s disease are often exquisitely sensitive to the central nervous system toxicities of drugs with antimuscarinic effects. Some evidence implicates excess excitation by glutamate as a contributor to neuronal death. In addition, abnormalities of mitochondrial function may contribute to neuronal death. 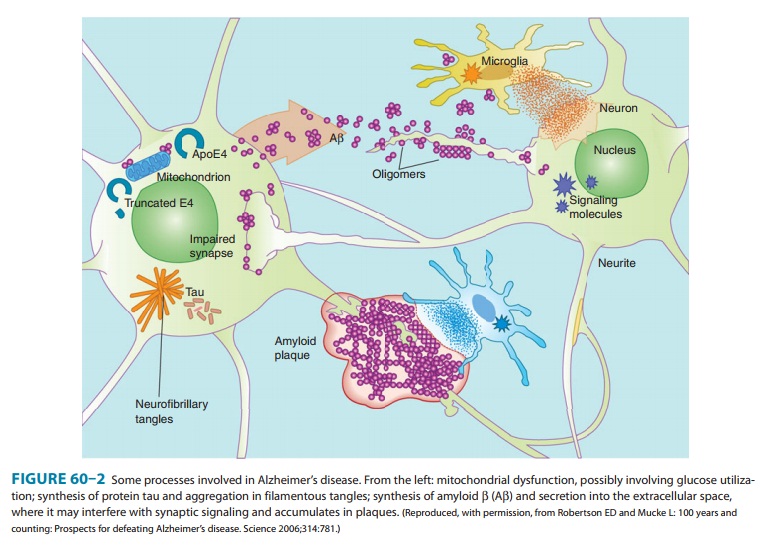 Many methods of treatment of Alzheimer’s disease have been explored (Table 60–3). Most attention has been focused on the cholinomimetic drugs because of the evidence of loss of cholin-ergic neurons. Monoamine oxidase (MAO) type B inhibition with selegiline (L-deprenyl) has been suggested to have some beneficial effects. One drug that inhibits N-methyl-D-aspartate (NMDA) glutamate receptors is available , and “ampakines,” substances that facilitate synaptic activity at glutamate AMPA receptors, are under intense study. Some evidence suggests that lipid-lowering statins are beneficial. Rosiglitazone, a PPAR-γ (per-oxisome proliferator-activated receptor-gamma) agent, has also been reported to have beneficial effects in a preliminary study. Unfortunately, this drug is associated with increased cardiovascu-lar risk and its use has been restricted . So-called cerebral vasodilators are ineffective. 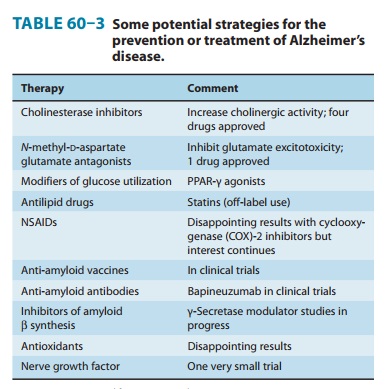 Tacrine (tetrahydroaminoacridine, THA), a long-acting cho-linesterase inhibitor and muscarinic modulator, was the first drug shown to have any benefit in Alzheimer’s disease.

Because of its hepatic toxicity, tacrine has been almost completely replaced in clinical use by newer cholinesterase inhibitors: donepezil, rivastig-mine, and galantamine. These agents are orally active, have ade-quate penetration into the central nervous system, and are much less toxic than tacrine. Although evidence for the benefit of cho-linesterase inhibitors (and memantine; ) is statistically significant, the clinical benefit from these drugs is modest and temporary.

The cholinesterase inhibitors cause significant adverse effects, including nausea and vomiting, and other peripheral cholinomi-metic effects. These drugs should be used with caution in patients receiving other drugs that inhibit cytochrome P450 enzymes (eg, ketoconazole, quinidine;).

Excitotoxic activation of glutamate transmission via NMDA receptors has been postulated to contribute to the pathophysiol-ogy of Alzheimer’s disease. Memantine binds to NMDA receptor channels in a use-dependent manner and produces a noncompeti-tive blockade. This drug appears to be better tolerated and less toxic than the cholinesterase inhibitors. Memantine is available as Namenda in 5 and 10 mg oral tablets.