It is accepted that cell-mediated immune mechanisms play the main pathogenic role in rheumatoid arthritis.

It is accepted that cell-mediated immune mechanisms play the main pathogenic role in rheumatoid arthritis. This conclusion is based on studies performed in the synovial fluid and on the hypertrophic synovium of the rheumatoid joints, both easily accessible to study by needle biopsy or aspiration. All the essential cellular elements of the immune response are present in the joint, and the main challenge is to reconstitute the sequence of events that leads to the progressive destruction of joint tissues.

A. Role of T Lymphocytes

Immunohistological studies of the inflammatory infiltrates of the synovial membrane show marked lymphocytic predominance (lymphocytes may represent up to 60% of the total tissue net weight). Among the lymphocytes infiltrating the synovium, CD4+ helper T lym-phocytes outnumber CD8+ lymphocytes in a ratio of 5:1. The critical pathogenic role for TH lymphocytes is suggested by two important observations:

1.           Rheumatoid arthritis is associated with specific DR alleles , and it is well accepted that MHC-II molecules present immunogenic peptides to TH lym-phocytes

2.           Increased concentrations of many lymphocyte-released cytokines are measur-able in the synovial fluid, probably reflecting the activated state of infiltrating lymphocytes.

Most of the infiltrating CD4+ lymphocytes have the phenotype of a terminally dif-ferentiated memory helper T cell (CD4+ , CD45RO+ ), which represent 20–30% of the mononuclear cells in the synovium. They also express class II MHC, consistent with chronic T-cell activation, but only 10% express CD25, suggesting that they do not prolif-erate actively in the synovial tissues. In situ hybridization studies performed in biopsies of synovial tissue obtained at late stages of the disease disclosed that these chronically acti-vated T cells express mRNAs for IL-2, IFN- γ, IL-7, IL-13, IL-15, and GM-CSF. One con-spicuously missing interleukin is IL-4, suggesting that the CD4+ , CD45RO+ T lympho-cytes in the synovial tissues are predominantly of the TH1 type, which produce predominantly IL-2 and IFN-γ . A variety of chemokines (RANTES, MIP1-α , MIP1-β , and IL-8), most of which are produced by lymphocytes, can also be detected in the synovial fluid. These chemokines are probably responsible for the attraction of additional T lymphocytes, monocytes, and neutrophils to the rheumatoid joint. T cells in the RA synovium also express CD40L, and are, therefore, able to deliver co-stimulating signals to B cells and dendritic cells .

A most significant question that remains unanswered involves the nature of the stimulus responsible for the activation of the T lymphocytes found in the synovial infiltrates. Studies of the TcR Vβ genes expressed by the infiltrating T lymphocytes have shown that the repertoire is limited, i.e., only some T-cell clones appear to be activated, and the same clones are found in several joints of the same patient. An even more restricted profile was observed when the analysis was confined to the antigen-binding area of the Vβ chain (the so-called CDR3 region). These findings suggest that antigenic stimulation through the TcR plays a critical role. However, a defined correlation between the Vβ chains expressed by the infiltrating T lymphocytes and the patient’s MHC-II alleles has not yet been found. Such a correlation is expected because of the role played by the MHC molecules in select-ing the T-cell repertoire of any given individual . Thus, HLA-linked RA susceptibility alleles could introduce a first bias in TcR selection, but there is no evidence supporting this hypothesis.

The long-term goal of these approaches—to identify the actual targets of the immune attack—remains elusive at this time. A major obstacle is our limited knowledge about the immunogenic peptides recognized by different TcR Vβ -region families. Until some break-through happens in that area, our understanding will remain fragmentary and highly spec-ulative.

B. Antigen Presentation and the Dendritic Cells

The autoimmune response that underlies the pathogenesis of RA is mostly localized to the synovial tissue and fluid in the synovial space. Fully differentiated dendritic cells can befound in the synovial tissue, surrounding small vessels and in close association with T cells and B-cell follicles. These dendritic cells (DC) appear to be derived from circulating pre-cursors, attracted to the synovium by chemokines such as MIP-1α , MCP, and RANTES , a process made possible by the expression of CAMs induced by TNF and IL-1. On reaching the synovium, DC undergo differentiation and activation under the in-fluence of T cells expressing the CD40L and of some of the cytokines present in high con-centrations in the synovial fluid, such as GM-CSF, TNF, and IL-1. Their differentiation in the synovium seems associated with an increased ability to present self antigen and, there-fore, to stimulate autoimmune responses. Activated and differentiated DC are also known to secrete IL-18, which, as discussed below, has pro-inflammatory activity, synergizes with IL-12 in the expansion of TH1 cells, and induces the synthesis and release of interferon-γ by activated TH1 cells.

C. B Cells as Local Amplificators of the Autoimmune Response

B cells expressing RF on their membrane can be found in the synovium of chronically in-flamed joints. These RF+ B cells can bind immune complexes by the Fc portion of the an-tibodies, a process that results in B-cell activation and peptide presentation to T cells. In this role as APCs, RF+ B cells can activate multiple T-cell clones recognizing a wide vari-ety of endogenous and exogenous peptides internalized as IC. Thus, RF+ B cells amplify intrasynovium immune responses and contribute to the exacerbation of the local inflam-matory process.

The synovial infiltrates are rich in activated monocytes, macrophages, and macrophage-de-rived synoviocytes, which are believed to play several critical pathogenic roles. One of the significant roles played by these cells is antigen presentation to CD4+ lymphocytes. It is not unusual to see macrophage-lymphocyte clusters in the inflamed synovial tissue and in those clusters, CD4+ lymphocytes are in very close contact with large macrophages ex-pressing high levels of class II MHC antigens. In addition, IL-12 and IL-18 mRNA and se-creted IL-12 and IL-18 are found at biologically active concentrations and could play an important role in TH1 expansion and differentiation.

The other critical role of synovial monocytes and macrophages is to induce and per-petuate local inflammatory changes. Several lines of evidence support this role. First, the synovial fluid of patients with RA contains relatively large concentrations of phospholipase A2 (PLA2), an enzyme that has a strong chemotactic effect on lymphocytes and monocytes. Moreover, this enzyme is actively involved in the metabolism of cell membrane phospho-lipids, particularly in the early stages of the cyclooxygenase pathway, which leads to the syn-thesis of eicosanoids such as the prostaglandin PGE2, one of a series of pro-inflammatory mediators generated from the breakdown of arachidonic acid. Thus, it is possible that these high levels of PLA2 reflect a hyperactive state of infiltrating macrophages engaged in the synthesis of PGE2 and other eicosanoids. Other factors locally released by activated macrophages include transforming growth factor-β (TGF-β ), GM-CSF, and interleukin-18.

TGF-β further contributes to the predominance of TH1 activity over TH 2 activity at the inflammatory sites.

GM-CSF induces the proliferation of several cell types in the monocyte-macrophage family, including dendritic cells. It has been suggested that this overproduction of GM-CSF by all CD4 cells (macrophages and T lymphocytes) is responsible for the relatively large number of dendritic cells found in the inflammatory lesion. This is a significant finding, be-cause activated dendritic cells release a variety of pro-inflammatory lymphokines, such as IL-1. Another prominent role of GM-CSF is to be a very strong inducer of the expression of MHC-II molecules (stronger than interferon-γ ). Increased MHC-II expression is be-lieved to be an important factor leading to the development of autoimmune responses and could help perpetuate a vicious circle of antiself immune response by facilitating the per-sistent activation of TH1 cells and, consequently, the stimulation of synovial cells, mono-cytes, and dendritic cells.

Interleukin-18, in addition to promoting differentiation of TH1 cells in synergism with IL-12, promotes the synthesis of interferon-γ , thus contributing indirectly to macrophage activation. In addition, mononuclear cells activated by IL-18 release GM-CSF, TNF, and prostaglandin E2 and show increased expression of inducible nitric oxide syn-thase. Therefore, IL-18 can be classified as a pro-inflammatory cytokine.

Finally, activated macrophages secrete a variety of metalloproteinases (including collagenase, elastase, stromelysin, matrylisin, and gelatinase B), particularly when stimu-lated with IL-1 and TNF-α . Studies of biopsies of the rheumatoid synovium discussed above found these two cytokines at levels high enough to deliver such stimulatory signals to monocytes and fibroblasts. The subsequent release of metalloproteinases is believed to have a primary role in causing tissue damage in the inflamed joints. 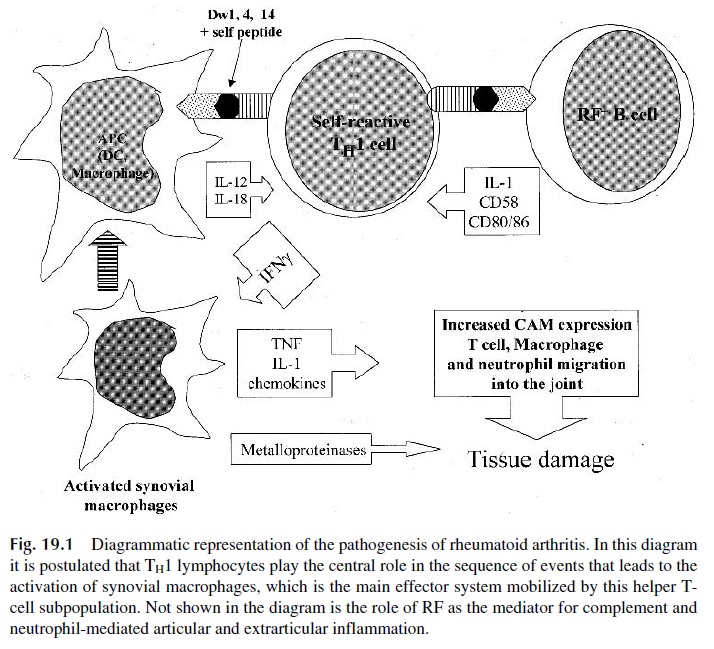