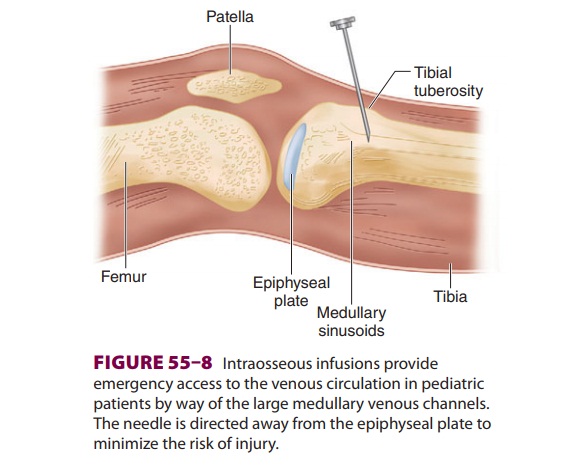 There is no definite relationship between the energy requirement for successful defibrillation and body size. A shock with too low an energy (current) level will not successfully defibrillate; conversely, too high an energy level may result in functional and morphological injury. Defibrillators deliver energy in either monophasic or biphasic waveforms. Increasingly, biphasic waveforms are recommended for cardioversion as they achieve the same degree of success but with less energy and theoretically less myocardial damage. 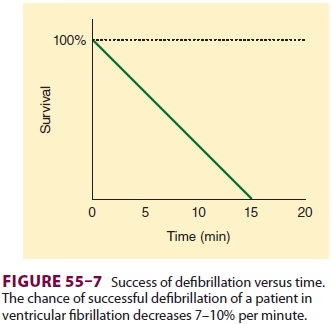 In many institutions, automated external defi-brillators (AEDs) are available. Such devices are increasingly being used throughout the community by police, firefighters, security personnel, sports marshals, ski patrol members, and airline flight attendants, among others. They are placed in any public location where 20,000 or more people pass by every day. AEDs are technologically advanced, microprocessor-based devices that are capable of electrocardiographic analysis with very high specific-ity and sensitivity in differentiating shockable from nonshockable rhythms. All AEDs manufactured today deliver some type of biphasic waveform shock. Compared with monophasic shocks, biphasic shocks deliver energy in two directions with equivalent effi-cacy at lower energy levels and possibly with less myocardial injury. These devices deliver impedance-compensating shocks employing either biphasic truncated exponential (BTE) or rectilinear (RBW) morphology. Biphasic shocks delivering low energy for defibrillation (120–200 joule [J]) have been found to be as or more effective than 200–360 J monophasic damped sine (MDS) waveform shocks. When using AEDs, one electrode pad is placed beside the upper right sternal border, just below the clavicle, and the other pad is placed just lateral to the left nipple, with the top of the pad a few inches below the axilla.

A decrease in time delay between the last com-pression and the delivery of a shock (the preshock pause) has received special emphasis in the new guidelines. Stacking shocks increases the time to next compression, and it has been noted that the first shock is usually associated with a 90% efficacy. Thus, stacked shocks have been replaced by a recommen-dation for a single shock, followed by immediate resumption of chest compressions.

For cardioversion of atrial f briillation (Table 55–3), 120–200 J can be used initially with escalation if needed. For atrial f lutter or paroxys-mal supraventricular tachycardia (PSVT), an initial energy level of 50–100 J is often adequate. All mono-phasic shocks should start with 200 J. 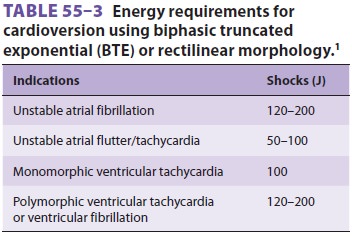 depending upon the type of biphasic waveform being used. Stepwise increases in energy levels should be used if the first shock fails, although some AEDs operate with a fixed-energy protocol of 150 J with very high success in terminating ventricular fibrilla-tion (Table 55–3).

Cardioversion should be synchronized with the QRS complex and is recommended for hemody-namically stable, wide-complex tachycardia requir-ing cardioversion, PSVT, atrial fibrillation, and atrial flutter. Polymorphic VT should be treated as VF with unsynchronized shocks.

Some resuscitation drugs are fairly well absorbed following administration through a TT. Lido-caine, epinephrine, atropine, naloxone, andvasopressin (but not sodium bicarbonate) can be delivered via a catheter whose tip extends past the TT. Dosages 2–2½ times higher than recommended for intravenous use, diluted in 10 mL of normal saline or distilled water, are recommended for adult patients. Even though establishing reliable intrave-nous access is a high priority, it should not take pre-cedence over initial chest compressions, airway management, or defibrillation. A preexisting inter-nal jugular or subclavian line is ideal for venous access during resuscitation. If there is no central line access, an attempt should be made to establish peripheral intravenous access in either the antecubi-tal or the external jugular vein. Peripheral intrave-nous sites are associated with a significant delay of 1–2 min between drug administration and delivery to the heart, as peripheral blood flow is drastically reduced during resuscitation. Administration of drugs given through a peripheral intravenous line should be followed by an intravenous flush (eg, a 20-mL fluid bolus in adults) and/or elevation of the extremity for 10–20 s. Establishing central vein access can potentially cause interruption of CPR but should be considered if an inadequate response is seen to peripherally administered drugs.If intravenous cannulation is difficult, an intraosseous infusion can provide emergencyvascular access in children. The success rate is lower in older children, but even in adults intraosseous cannulas have been successfully placed in the tibia and in the distal radius and ulna. A rigid 18-gauge spinal needle with a stylet or a small bone marrow trephine needle can be inserted into the distal femur or proximal tibia. If the tibia is chosen, a needle is inserted 2–3 cm below the tibial tuberosity at a 45° angle away from the epiphyseal plate (Figure 55–8). Once the needle is advanced through the cortex, it should stand upright without support. Proper place-ment is confirmed by the ability to aspirate marrow through the needle and a smooth infusion of fluid.network of venous sinusoids within the medullary cavity of long bones drains into the systemic cir-culation by way of nutrient or emissary veins. This route is very effective for administration of drugs, crystalloids, colloids, and blood and can achieve flow rates exceeding 100 mL/h under gravity. Much higher flow rates are possible if the fluid is placed under pressure (eg, 300 mm Hg) with an infu-sion bag. The onset of drug action may be slightly delayed compared with intravenous or tracheal 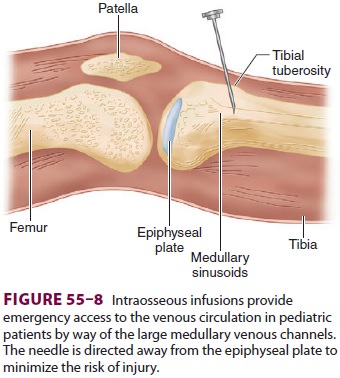 administration. The intraosseous route may require a higher dose of some drugs (eg, epinephrine) than recommended for intravenous administra-tion. The use of intraosseous infusion for induction and maintenance of general anesthesia, antibiotic therapy, seizure control, and inotropic support has been described. (Note that most studies have evalu-ated the placement of intraosseous access in patients with intact hemodynamics or hypovolemic states, not in cardiac arrest situations.) Because of the risks of osteomyelitis and compartment syndrome, how-ever, intraosseous infusions should be replaced by a conventional intravenous route as soon as possible. In addition, because of the theoretical risk of bone marrow or fat emboli, intraosseous infusions should be avoided if possible in patients with right-to-left shunts, pulmonary hypertension, or severe pulmo-nary insufficiency.

Successful pharmacological and electrical treatment of cardiac arrest (Figure 55–9) depends on defini-tive identification of the underlying arrhythmia. Interpreting rhythm strips in the midst of a resus-citation situation is complicated by artifacts and variations in monitoring techniques (eg, lead sys-tems, equipment). 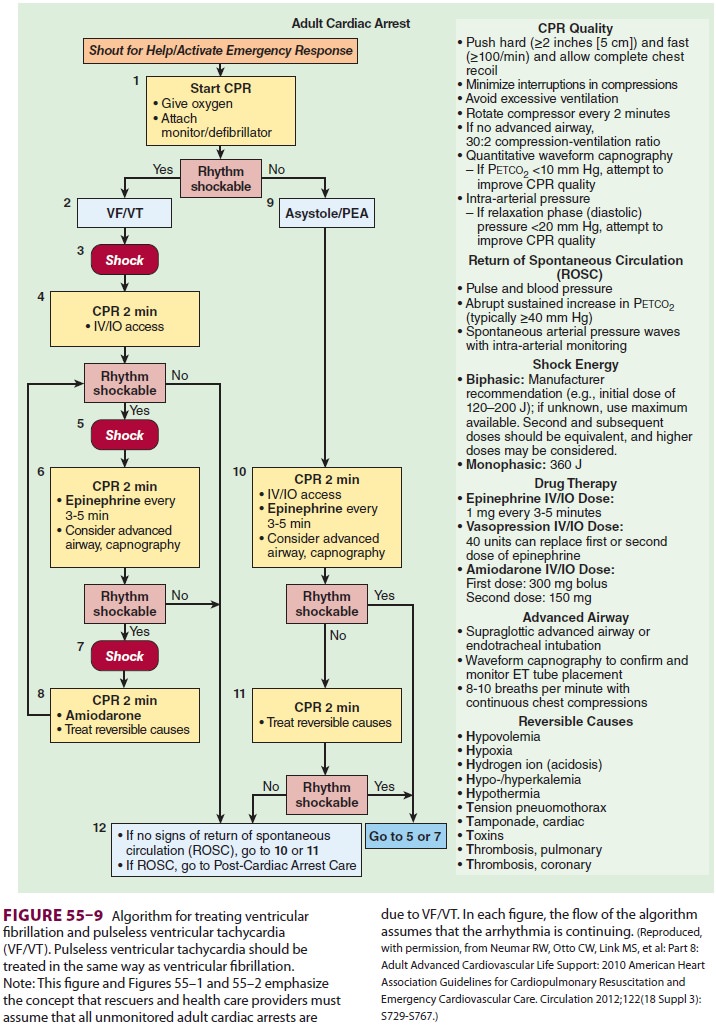 Many of the drugs administered during CPR have been described elsewhere in this text. Table 55–4 sum-marizes the cardiovascular actions, indications, and dosages of drugs commonly used during resuscitation. 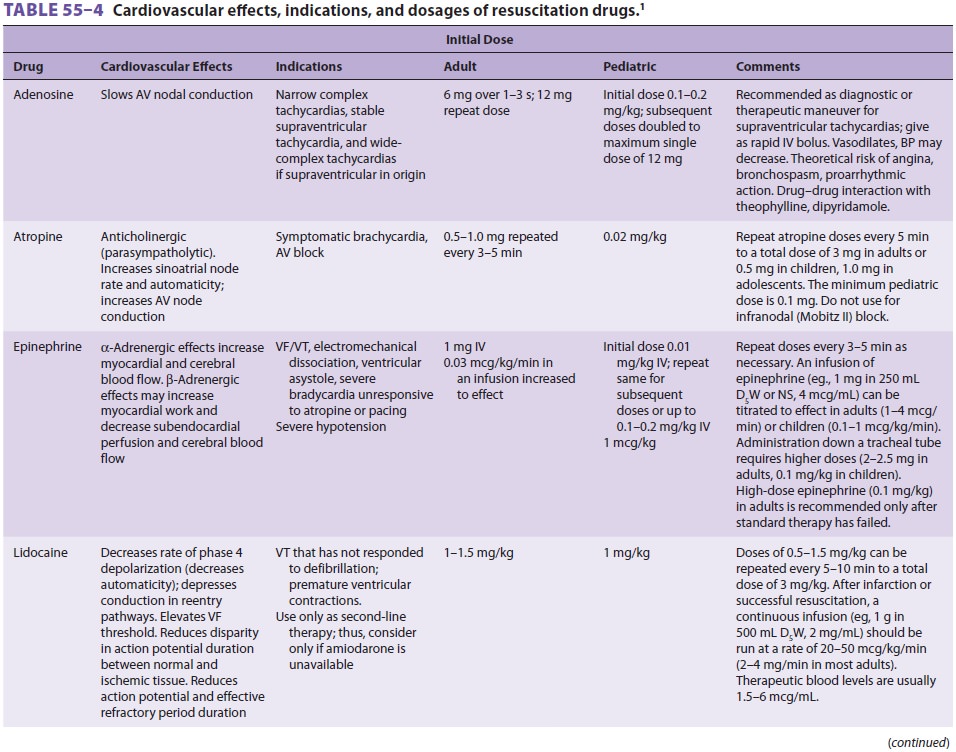 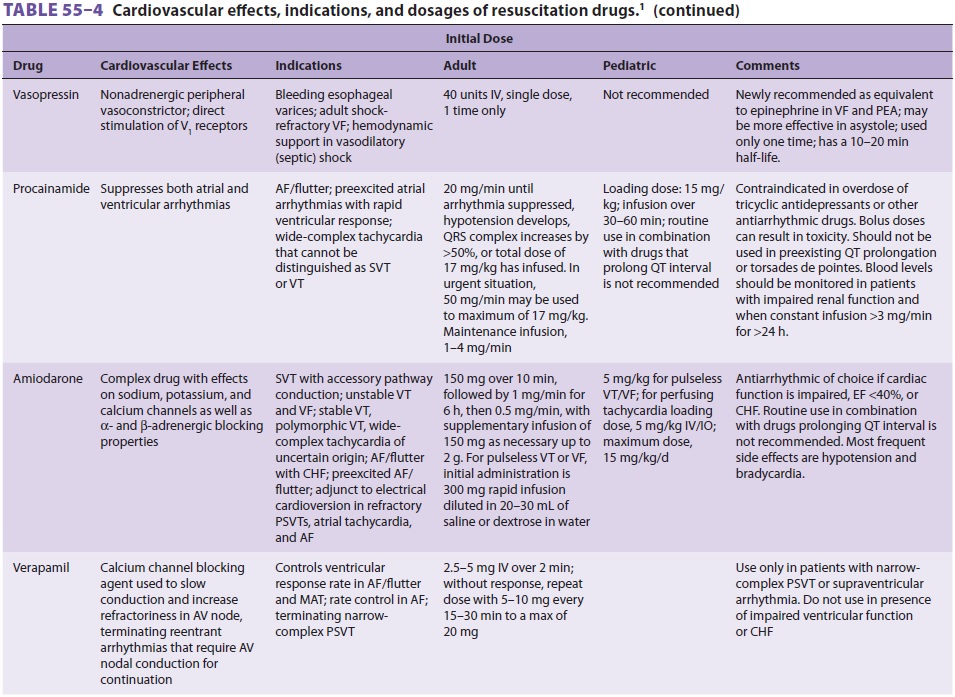 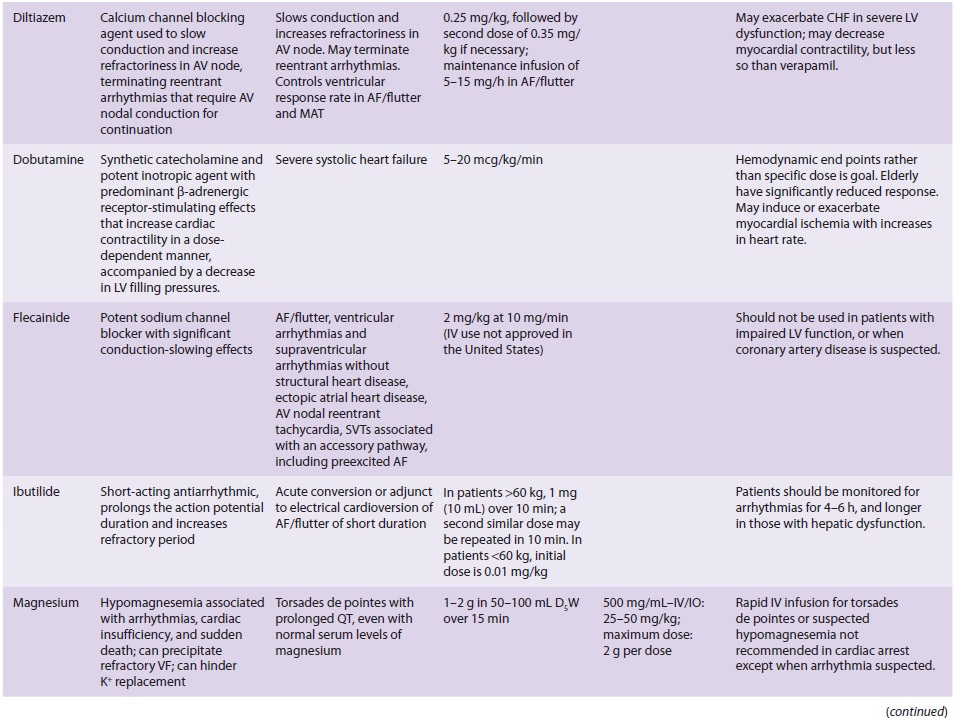 Atropine is not included as a drug for PEA/ asystole in the new CPR-ECC guidelines; however, its use is retained for symptomatic bradycardia. Infu-sions of chronotropic drugs (eg, dopamine, epineph-rine, isoproterenol) can be considered as an alternative to pacing if atropine is ineffective in the setting of symptomatic bradycardia. Calcium chloride, sodium bicarbonate, and bretylium are conspicuously absent from this table. Calcium (2–4 mg/kg of the chloride salt) is helpful in the treatment of documented hypo-calcemia, hyperkalemia, hypermagnesemia, or a cal-cium channel blocker overdose. When used, 10% calcium chloride can be given at 2–4 mg/kg every 10 min. Sodium bicarbonate (0.5–1 mEq/kg) is not recommended in the guidelines and should be con-sidered only in specific situations such as preexisting metabolic acidosis or hyperkalemia, or in the treat-ment of tricyclic antidepressant or barbiturate over-dose. Sodium bicarbonate elevates plasma pH by combining with hydrogen ions to form carbonic acid, which readily dissociates into carbon dioxide and water. Because carbon dioxide, but not bicar-bonate, readily crosses cell membranes and theblood–brain barrier, the resulting arterial hypercap-nia will cause intracellular tissue acidosis. Although successful defibrillation is not related to arterial pH, increased intramyocardial carbon dioxide may reduce the possibility of cardiac resuscitation. Furthermore, bicarbonate administration can lead to detrimental alterations in osmolality and the oxygen–hemoglobin dissociation curve. Therefore, effective alveolar venti-lation and adequate tissue perfusion are the treat-ments of choice for the respiratory and metabolic acidosis that accompany resuscitation.

Intravenous fluid therapy with either colloid or balanced salt solutions is indicated in patients with intravascular volume depletion (eg, acute blood loss, diabetic ketoacidosis, thermal burns). Dextrose-containing solutions may lead to a hyperosmotic diuresis and may worsen neurological outcome. They should be avoided unless hypoglycemia is suspected.

Transcutaneous cardiac pacing (TCP) is a noninva-sive method of rapidly treating arrhythmias caused by conduction disorders or abnormal impulse. TCP is not routinely recommended in cardiac arrest. TCP use may be considered to treat asystole, bradycardia caused by heart block, or tachycardia from a reentrant mechanism. If there is concern about the use of atro-pine in high-grade block, TCP is always appropriate. If the patient is unstable with marked bradycardia, TCP should be implemented immediately while awaiting treatment response to drugs. The pacer unit has become a built-in feature of some defibrillator models. Disposable pacing electrodes are usually positioned on the patient in an anterior–posterior manner. The placement of the negative electrode cor-responds to a V2 electrocardiograph position, whereas the positive electrode is placed on the left posterior chest beneath the scapula and lateral to the spine. Note that this positioning does not interfere with pad-dle placement during defibrillation. Failure to capture may be due to electrode misplacement, poor elec-trode-to-skin contact, or increased transthoracic impedance (eg, barrel-shaped chest, pericardial effu-sion). Current output is slowly increased until the pacing stimuli obtain electrical and mechanical capture. A wide QRS complex following a pacing spike signals electrical capture, but mechanical(ventricular) capture must be confirmed by an improving pulse or blood pressure. Conscious patients may require sedation to tolerate the discom-fort of skeletal muscle contractions. Transcutaneous pacing can provide effective temporizing therapy until transvenous pacing or other definitive treatment can be initiated. TCP has many advantages over transvenous pacing because it can be used by almost all electrocardiogram providers and can be started quickly and conveniently at the bedside.

The precordial thump is to be considered only in witnessed, monitored unstable VT when a defibril-lator is not immediately available.