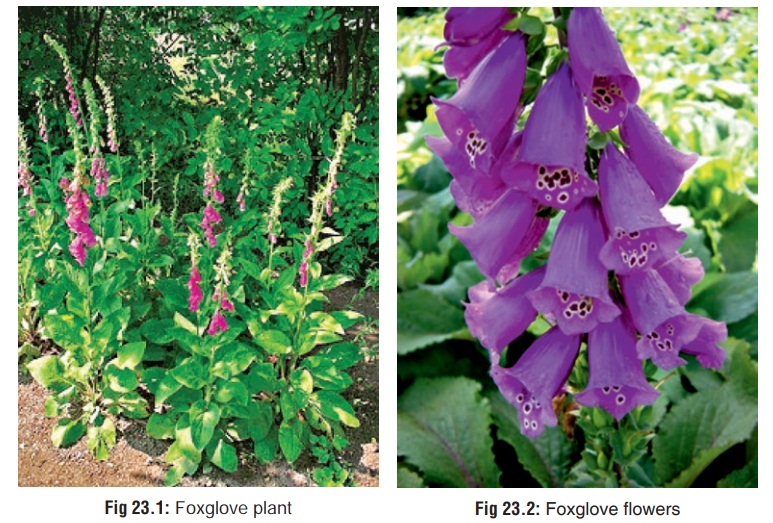 The history of cardiac glycosides in relation to the treatment of congestive heart failure begins with the classic 1785 monograph by William Withering, who wrote about the therapeutic and toxic properties of Digitalis purpurea. The common name of this plant is foxglove, and it grows well in the hilly regions of Darjeeling, Nilgiris, and Kashmir. It is a biennial or perennial herb belonging to family Scrophulariaceae, growing upto 1 to 1.5 metres in height (Fig 23.1). Leaves are hairy, ovate, toothed, and grey-green in colour, while the flowers are tubular and pink or white in colour (Fig 23.2). There is a related species, Digitalis lanata, which is also rich in cardiac glycosides. Leavesconstitute the main source of glycosides in both plants. 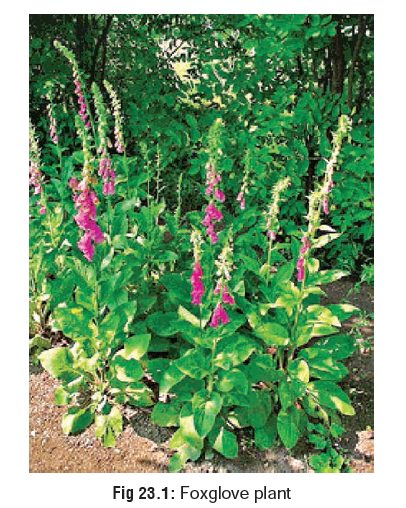 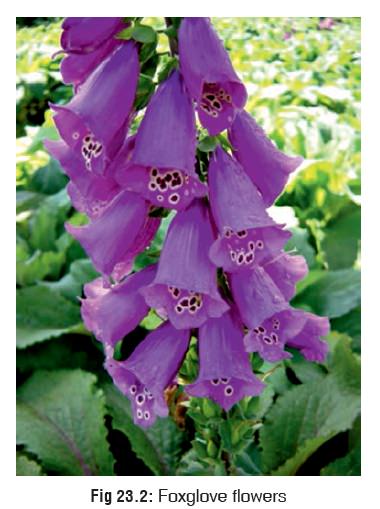 The following discussion will be mainly with reference to the digitalis glycosides digoxin and digitoxin, which are the most widely used cardiac glycosides. Other less commonly used glycosides include gitoxin, gitalin, digitonin, digitin (all from D.purpurea), lanatoside C, and deslanoside (both from D.lanata).

■■  Peak serum concentrations of digoxin occur within 1.5 to 6 hours after an oral dose. For digitoxin and digitalis leaf, the peak of cardiac toxicity is 4 to 12 hours.

■■  Digoxin is metabolised to a very minor extent (about 16%) via hydrolysis, oxidation, and conjugation. Metabolism is not dependant on the cytochrome P450 system.

■■  After a single dose, digoxin is the major serum and urine metabolite of digitoxin. 60 to 80% of digoxin is excreted unchanged in the urine and the terminal half-life is about 36 hours. Digitoxin has a much longer elimination half-life (about 100 hours).

■■  Most of an administered dose of digoxin is distributed to skeletal muscle after absorption (about 65%). The myocar-dium : plasma ratio is about 30 : 1.

■■Digitalis glycosides inhibit active transport of Na+ and K+ across cell membranes by binding onto a specific site on the extracytoplasmic face of the alpha subunit of Na+-K+-ATPase. The force of contraction of the heart (positive inotropic effect) is increased due to increase in cytosolic Ca++ during systole. Both Na+ and Ca++ enter the myocar-dial cells during each cycle of depolarisation, contraction, and repolarisation. During repolarisation and relaxation, Ca++ is pumped back into the sarcoplasmic reticulum by Ca++-ATPase and is removed intracellularly by a Na+Ca++ exchanger, and a sarcolemmal Ca++-ATPase.

■■  Massive acute cardiac glycoside overdose differs signifi-cantly from chronic toxicity. In acute overdose, the sodium-potassium pump is poisoned, producing a fall in intracellular potassium and a rise in extracellular potas-sium, which may be marked. The normal membrane resting potential is reduced, and electrical conduction is slowed, with eventual complete loss of myocardial electrical func-tion. Clinically this results in high grade heart block, and eventually in asystole, which may not respond to electrical pacing.

·              Toxicity is increased by diuretics (except potassium- sparing) and corticosteroids, because of hypokalaemia. Common drugs that may reduce the elimination of cardiac glycosides and result in digitalis intoxication include: amiodarone, propafenone, quinidine, and verapamil.

·      Manifestations of digitalis overdose are mentioned sepa-rately for adults and children in Table 23.2.

o     In an acute ingestion, nausea and vomiting are promi-nent as well as evidence of cardiotoxicity.

o     In chronic poisoning, non-specific symptoms, such as malaise and weakness predominate, as well as the classic, but rare, visual disturbances.

·      Lethargy, drowsiness, weakness, paraesthesias, and headache may occur with digoxin toxicity. Signs of toxic psychosis, including hallucinations, paranoia, agitation, confusion, and delirium, may also occur. Often, CNS signs will be the only presentation of digitalis toxicity, before cardiac or gastrointestinal symptoms.

·      The hallmark of digitalis poisoning is increased automa-ticity coupled with concomitant conduction delay. Every known type of arrhythmia has been associated with digitalis intoxication, including bradycardia, all degrees of heart block, PAT with block, bundle branch block, nodal tachy-cardia with AV dissociation, atrial and ventricular ectopy, and ventricular tachycardia and fibrillation; any or all may occur in the same patient. Although no single arrhythmia is always present, commonly appearing aberrations include frequent premature ventricular beats, bradyarrhythmias, paroxysmal atrial tachycardia with block, junctional tachy-cardia, and bidirectional ventricular tachycardia.

·      Nausea, vomiting and abdominal pain are early manifes-tations of acute and chronic toxicity. The most common presenting symptoms in a paediatric patient are gastroin-testinal complaints, sinus bradycardia, or first-degree AV block.

·              Hypotension and cardiac arrest may occur. Peak cardiac effects generally occur 3 to 6 hours following digoxin over-dosage and may persist for the ensuing 24 hours or longer. Profound hyperkalaemia after acute ingestion is common.

·       Photophobia, amblyopia, miosis, and aberrations of colour (predominance of yellow-green), are associated primarily with chronic toxicity. Cones are 50-fold more sensitive than rods. Inhibition of light response by photoreceptors is concentration-dependant and reversible.

Acute digoxin ingestion of greater than 10 mg in a previ-ously healthy adult, or 4 mg in a child may produce serious toxicity, including cardiac arrest.

Therapeutic plasma concentration of digoxin should not exceed 2 ng/ml. Concentrations exceeding 15 ng/ml are poten-tially fatal. Usual therapeutic range: 0.5 to 2 ng/ml (0.64 to 2.56 nmol/L). Paediatric patients appear to be more resistant to the cardiotoxic effects of digoxin than adults at comparable serum levels. Children excrete digoxin more rapidly than older patients. In overdose, the distribution phase may be prolonged, therefore, serum digoxin levels may not be meaningful until approximately 6 hours post-ingestion. Due to digoxin pharma-cokinetics, serum samples should not be drawn within 6 hours of the previous dose, unless toxicity or overdose is strongly suspected.

A summary of the important treatment measures is given in Table 23.3.

While digoxin immune Fab fragments are the preferred treatment for severe or life-threatening cardiac glycoside intoxication, multiple dose activated charcoal may be useful in situations in which Fab frag-ments are not available. Whole bowel irrigation may be useful after large ingestions.

·              All patients with a history of cardiac glycoside inges-tion should have a baseline electrocardiogram, and serial serum levels and electrolytes. Patients who remain asymptomatic with normal (or unchanged from previous) baseline and follow-up electrocardiogram, declining serum levels, and normal electrolytes, may be discharged after 6 hours of observation, following psychiatric consultation if indicated.

·              Antidote:Digoxin-specific antibody fragments (Fab) -Fab therapy is of proven efficacy in not only digitalis overdose, but also in oleander poisoning. Fab fragments are administered intravenously. They bind intravascular free digoxin and then diffuse into the interstitial space and bind free digoxin there. Digoxin and potassium levels should be followed; continuous ECG monitoring is also indicated. Therapy should be guided by the occurrence of life-threatening arrhythmia, significant cardiac compromise or severe hyperkalaemia rather than by digoxin concentration alone. In the absence of major clinical signs/symptoms, an absolute digoxin concentration of greater than 10 nmol/L (6 hours after last dose) is an indication for the use of digoxin Fab fragments.

––  Indications for antidotal treatment include—

--  Dose depends on total body load (TBL) of digoxin which can be calculated in 3 ways:

»»  Estimate serum digoxin (or digitoxin) leveland use the following formula - Serum level (ng/ml) x volume of distribution (Vd)weight (kg), where Vd is 5.6 L/kg for digoxin, and 0.56 L/kg for digitoxin.

––  Mode of Administration—Intravenous, over 30 minutes, via a 0.22 micron membrane filter.

Reconstitute each vial with 4 ml of sterile water and use immediately (or within 4 hours if refrigerated).

–– Disadvantages—Not yet available in India. Can be procured from abroad, but is extremely expensive. A full course of antidotal therapy with Fab fragments can cost several thousand dollars.

·              In the absence of Fab fragments, ventricular irrita-bility can be treated with phenytoin or lignocaine. Antiarrhythmics that may be useful include atropine, phenytoin and lignocaine.

–– Lignocaine: 1 mg/kg IV bolus, followed by contin-uous infusion at 1 to 4 mg/min in adult, or 20 to 50 mcg/kg/min in child. 15 minutes after initial bolus, an additional 1 mg/kg IV bolus should be adminis-tered (both adult and child).

·              Atropine is useful in the management of bradycardia, and varying degrees of heart block due to the digitalis-induced effects of enhanced vagal tone on SA node rhythmicity and on conduction through the AV node. In patients with severe supraventricular bradyarrhythmias, or high degrees of AV block, 0.5 mg of atropine is given 0.1 mg). This dose can be repeated every 5 minutes as necessary.

·              Magnesium (20 ml of 20% solution over 20 minutes by slow infusion) has been reported to reverse digoxin induced arrhythmias. It should be used extremely cautiously if at all in the presence of renal failure.

·              External or transvenous pacemaker: Pacemaker use should be considered in severe bradycardia and/or slow ventricular rate due to second or high-degree AV block that fails to respond to atropine and/or phenytoin when Percutaneous cardiopulmonary bypass has been used for therapy resistant cardiac arrest due to digoxin over-for therapy resistant cardiac arrest due to digoxin over-dose. Catecholamines may be needed during bypass to maintain arterial pressure. This method may providehaemodynamic support and sufficient tissue perfu-sion to allow neutralisation by digoxin immune FAB in patients with cardiac arrest due to massive cardiac glycoside overdoses.

·              Haemodialysis is ineffective in removing cardiac glycosides but may assist in restoring serum potassium to normal levels. Plain, charcoal, and immobilised antidigoxin antibody haemoperfusion have all been used in digoxin and digitoxin overdose. None of these techniques have proven utility in these ingestions. Treatment of hypo-/hyperkalaemia, and hypomagne- saemia, as follows—

––  Hyperkalaemia: IV insulin, dextrose, sodium bicarbonate, and oral ion-exchange resins (sodium polystyrene sulfonate). Digoxin immune Fab is first-line treatment. Fab fragments and bicarbonate/ insulin/glucose should not be used simultaneously because severe hypokalaemia may result. Do not administer calcium salts. Calcium increases cardiac effects of glycosides, and may precipitate arrhythmias. Hyperkalaemia is caused by poisoning of Na-K pump by glycoside, so that intracellular potassium becomes extracellular; there is not increased total body potassium.