An amplifier is used to increase the signal level. It is used to get a larger signal output from a small signal input. Assume a sinusoidal signal at the input of the amplifier. At the output, signal must remain sinusoidal in waveform with frequency same as that of input. To make the transistor work as an amplifier, it is to be biased to operate in active region. It means base-emitter junction is forward biased and base-collector junction is reverse biased. 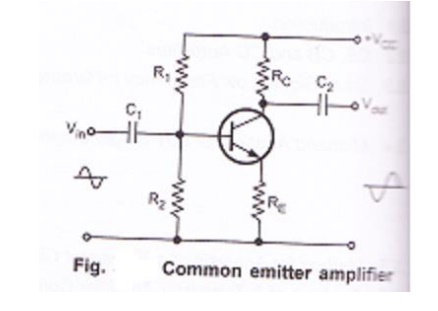 In the absence of input signal, only D.C. voltage is present in the circuit. It is known as zero signal or no signal condition or quiescent condition. D.C. collector-emitter voltage VCE, D.C. collector current IC and base current IB is the quiescent operating point for the amplifier. Due to this base current varies sinusoidaly as shown in the below figure.

If the transistor is biased to operate in active region, output is linearly proportional to the input.

Variations in the collector current and voltage between collector and emitter due to change in base current are shown graphically with the help of load line in the above figure. 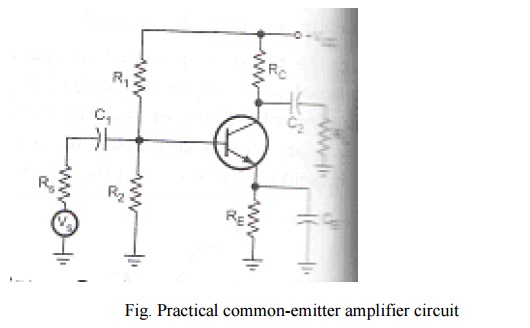 From above circuit, it consists of different circuit components. The functions of these components are as follows:

C1 couples the signal to base of the transistor. It blocks any D.C. component present in the signal and passes only A.C. signal for amplification.

CE is connected in parallel with emitter resistance RE to provide a low reactance path to the amplified A.C. This will reduce the output voltage and reducing the gain value.

The impedance of the capacitor is given by,

The phase relationship between the input and output voltages can be determined by considering the effect of positive and negative half cycle separately. The collector current is β times the base current, so the collector current will also increases. This increases the voltage drop across RC. 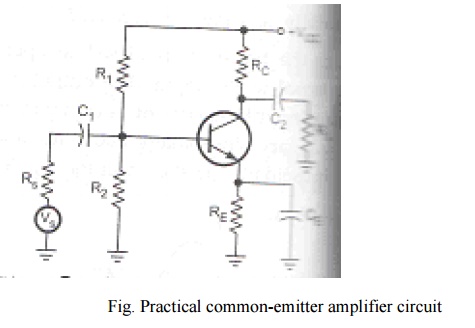 From above circuit, D.C. biasing is provided by R1, R2 and RE. The load resistance is capacitor coupled to the emitter terminal of the transistor. When a signal is applied to base of the transistor, VB is increased and decreased as the signal goes positive and negative respectively.

Consider VBE is constant, so the variation in VB appears at emitter and emitter voltage VE will vary same as base voltage VB. In common collector circuit, emitter terminal follows the signal voltage applied to the base. It is also known as emitter follower. 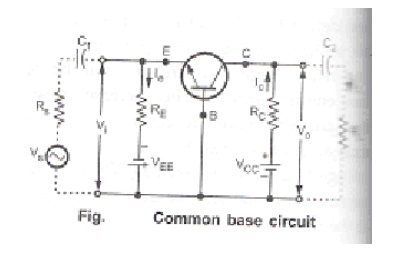 From above circuit, the signal source is coupled to the emitter of the transistor through C1. The load resistance RL is coupled to the collector of the transistor through C2. The positive going pulse of input source increases the emitter voltage. As base voltage is constant, forward bias of emitter-base junction reduces. This reduces Ib, Ic and drop across Rc.

Reduction in IC results in an increase in Vo. Positive going input produces positive going output and vice versa. So there is no phase shift between input and output in common base amplifier.