The BLOCKING OSCILLATOR is a special type of wave generator used to produce a narrow pulse, or trigger.

The BLOCKING OSCILLATOR is a special type of wave generator used to produce a narrow pulse, or trigger. Blocking oscillators have many uses, most of which are concerned with the timing of some other circuit. They can be used as frequency dividers or counter circuits and for switching other circuits on and off at specific times.

In a blocking oscillator the pulse width (pw), pulse repetition time (prt), and pulse repetition rate (prr) are all controlled by the size of certain capacitors and resistors and by the operating characteristics of the transformer. The transformer primary determines the duration and shape of the output. Because of their importance in the circuit, transformer action and series RL circuits will be discussed briefly. You may want to review transformer action in NEETS, Module 2, Introduction to Alternating Current and Transformers before going to the next section. 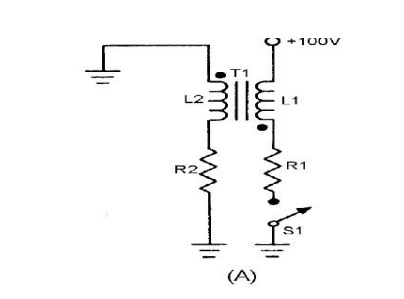 A basic principle of inductance is that if the increase of current through a coil is linear; that is, the rate of current increase is constant with respect to time, then the induced voltage will be constant. This is true in both the primary and secondary of a transformer. Figure 3-32, view (B), shows the voltage waveform across the coil when the current through it increases at a constant rate.

Notice that thiswaveform is similar in shape to the trigger pulse shown earlier in figure 3-1, view (E). By definition, a blocking oscillator is a special type of oscillator which uses inductive regenerative feedback. The output duration and frequency of such pulses are determined by the characteristics of a transformer and its relationship to the circuit. 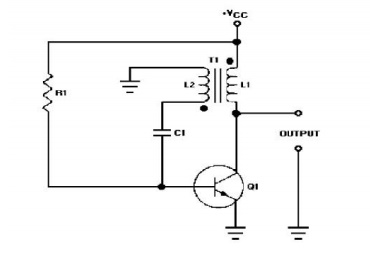 When power is applied to the circuit, R1 provides forward bias and transistor Q1 conducts. Current flow through Q1 and the primary of T1 induces a voltage in L2. The phasing dots on the transformer indicate a 180-degree phase shift. As the bottom side of L1 is going negative, the bottom side of L2 is going positive. The positive voltage of L2 is coupled to the base of the transistor through C1, and Q1conducts more.

This provides more collector current and more current through L1. This action is regenerative feedback. Very rapidly, sufficient voltage is applied to saturate the base of Q1. Once the base becomes saturated, it loses control over collector current. The circuit now can be compared to a small resistor (Q1) in series with a relatively large inductor (L1), or a series RL circuit. 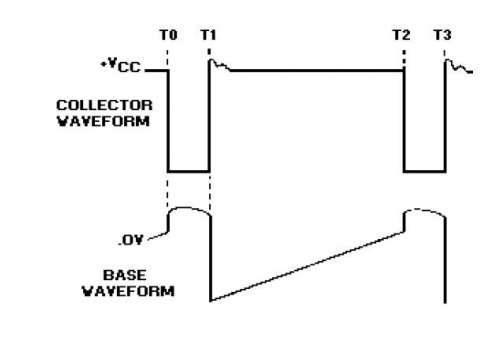 The operation of the circuit to this point has generated a very steep leading edge for the output pulse.Figure 3-34 shows the idealized collector and base waveforms. Once the base of Q1 becomes saturated, the current increase in L1 is determined by the time constant of L1 and the total series resistance. From T0 to T1 in figure 3-34 the current increase (not shown) is approximately linear.

The voltage across L1 will be a constant value as long as the current increase through L1 is linear.

At time T1, L1 saturates. At this time, there is no further change in magnetic flux and no coupling from L1 to L2. C1, which has charged during time TO to T1, will now discharge through R1 and cut off Q1. This causes collector current to stop, and the voltage across L1 returns to 0.

The length of time between T0 and T1 (and T2 to T3 in the next cycle) is the pulse width, which depends mainly on the characteristics of the transformer and the point at which the transformer saturates. A transformer is chosen that will saturate at about 10 percent of the total circuit current.

The collector waveform may have an INDUCTIVE OVERSHOOT (PARASITIC OSCILLATIONS)at the end of the pulse. When Q1 cuts off, current through L1 ceases, and the magnetic field collapses,inducing a positive voltage at the collector of Q1. These oscillations are not desirable, so some means must be employed to reduce them. The transformer primary may be designed to have a high dc resistance resulting in a low Q; this resistance will decrease the amplitude of the oscillations. However, more damping may be necessary than such a low-Q transformer primary alone can achieve.

If so, a DAMPING resistor can be placed in parallel with L1, When an external resistance is placed across a tank, the formula for the Q of the tank circuit is Q = R/XL, where R is the equivalent total circuit resistance in parallel with L. the Q is directly proportional to the damping resistance (R). In figure 3-35,damping resistor R2 is used to adjust the Q which reduces the amplitude of overshoot parasiticoscillations. 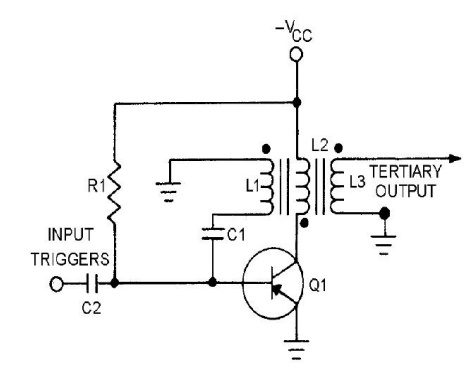 As R2 is varied from infinity toward zero, the decreasing resistance will load the transformer to the point that pulse amplitude, pulse width, and prf are affected. If reduced enough, the oscillator will cease to function. By varying R2, varying degrees of damping can be achieved

The blocking oscillator discussed is a free-running circuit. For a fixed prf, some means of stabilizing the frequency is needed. One method is to apply external synchronization triggers (figure 3-37), view (A) and view (B). Coupling capacitor C2 feeds input synchronization (sync) triggers to the base of Q1.