Biosphere is the part of the earth where life exists. All resources of biosphere can be grouped into two major categories namely:

Biosphere is the part of the earth where life exists. All resources of biosphere can be grouped into two major categories namely:

(i) Biotic or living factors which include plants, animals and all other living organisms.

(ii) Abiotic or non-living factors which include all factors like temperature, pressure, water, soil, air and sunlight which affect the ability of organisms to survive and reproduce.

Water cycle has the answers for all these questions. Water cycle or hydrological cycle is the continuous movement of water on earth. In this process, water moves from one reservoir to another, from river to ocean or from ocean to the atmosphere by processes such as evaporation, sublimation, transpiration, condensation, precipitation, surface runoff and infiltration, during which water converts itself to various forms like liquid, solid and vapour (Fig. 6.1). Let's begin the process of water cycle with evaporation. 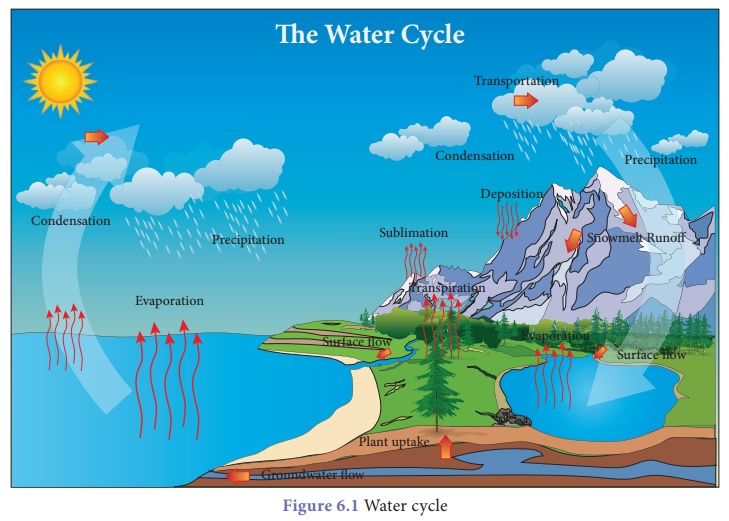 Evaporation is a type of vaporization, where liquid is converted to gas before reaching its boiling point. Water evaporates from the surface of the earth and water bodies such as the oceans, seas, lakes, ponds and rivers turn into water vapour.

Sublimation is conversion of solid to gas, without passing through the intermediate liquid phase. Ice sheets and ice caps from north and south poles, and icecaps on mountains, get converted into water vapour directly, without converting into liquid.

Transpiration is the process by which plants release water vapour to atmosphere through small pores in leaves and stems.

Condensation is the changing of gas phase into liquid phase and is the reverse of vaporisation. At higher altitudes, the temperature is low. The water vapour present there condenses to form very tiny particles of water droplets. These particles come close together to form clouds and fog.

Due to change in wind or temperature, clouds combine to make bigger droplets, and pour down as precipitation(rain). Precipitation includes drizzle, rain, snow and hail.

As the water pours down, it runs over the surface of earth. Runoff water combines to form channels, rivers, lakes and ends up into seas and oceans.

Some of the precipitated water moves deep into the soil. Then it moves down and increases the ground water level.

Some of the precipitated water flows through soil and porous or fractured rock:

Infiltration and percolation are two related but different processes describing the movement of water through soil.

Major human activities affecting the water cycle on land are urbanisation, dumping of plastic waste on land and into water, polluting water bodies and deforestation.

Nitrogen is primary nutrient important for survival of all living organisms. It is an essential component of proteins, DNA and chlorophyll. Atmosphere is a rich source of nitrogen and contains about 78% nitrogen. Plants and animals cannot utilize atmospheric nitrogen. They can use it only if it is in the form of ammonia, amino acids or nitrates.

Processes involved in nitrogen cycle are explained below. 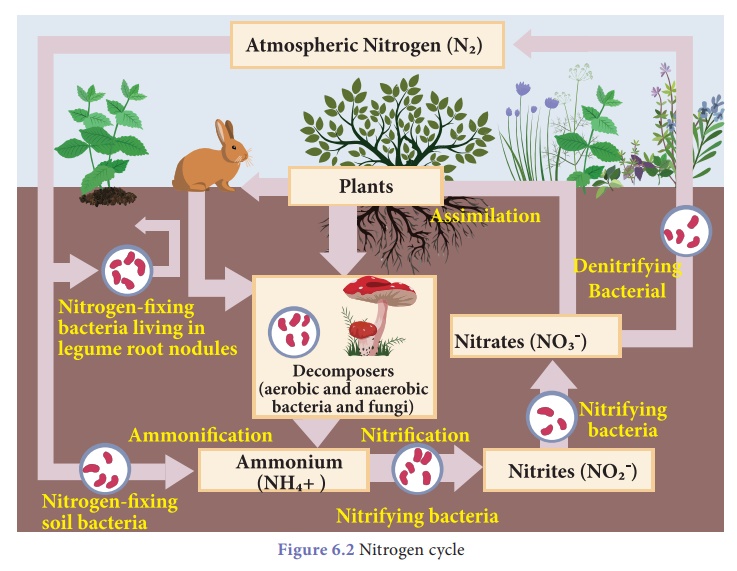 Nitrogen fixation is the conversion of atmospheric nitrogen, which is in inert form into reactive compounds available to living organisms. This conversion is done by a number of bacteria and blue green algae (Cyanobacteria). Leguminous plants like pea and beans have a symbiotic relationship with nitrogen fixing bacteria Rhizobium. Rhizobia occur in the root nodules of leguminous plants and fixes nitrogenous compounds.

The ammonium compounds formed by ammonification process are oxidised to soluble nitrates. This process of nitrate formation is known as nitrification. The bacteria responsible for nitrification are called as nitrifying bacteria.

Free living soil bacteria such as Pseudomonas sp. reduce nitrate ions of soil into gaseous nitrogen which enters the atmosphere.

Burning fossil fuels, application of nitrogen-based fertilizers and other activities can increase the amount of biologically available nitrogen in an ecosystem. Nitrogen applied to agricultural fields enters rivers and marine systems. It alters the biodiversity, changes the food web structure and destroys the general habitat. 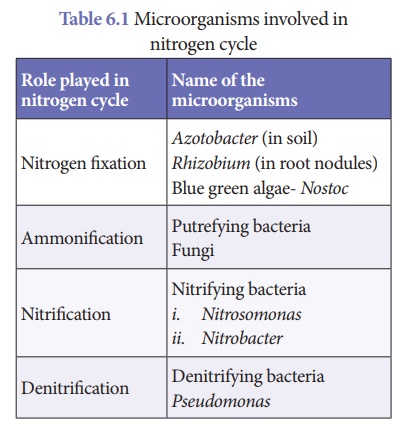 Carbon occurs in various forms on earth. Charcoal, diamond and graphite are elemental forms of carbon. Combined forms of carbon include carbon monoxide, carbon dioxide and carbonate salts. All living organisms are made up of carbon containing molecules like proteins and nucleic acids. The atmospheric carbon dioxide enters into the plants through the process of photosynthesis to form carbohydrates. From plants, it is passed on to herbivores and carnivores. During respiration, plants and animals release carbon into atmosphere in the form of carbon dioxide. Carbon dioxide is also returned to the atmosphere through decomposition of dead organic matter, burning fossil fuels and volcanic activities. 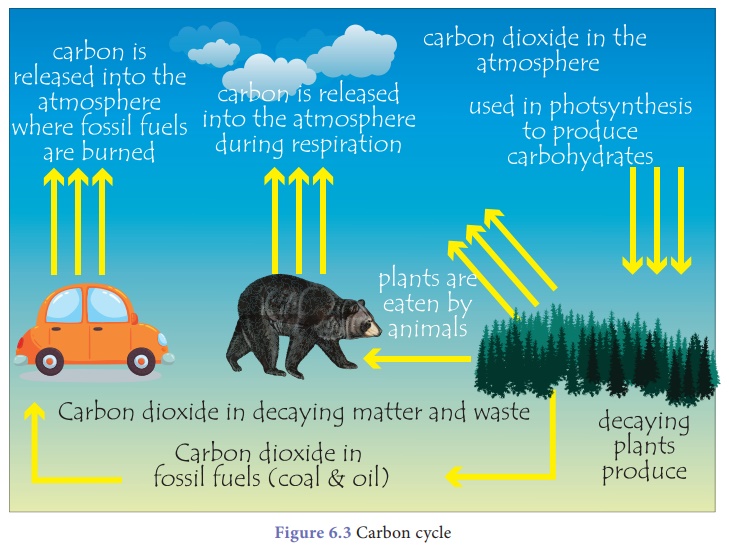 It is really interesting to know how nature renews itself. At the same time, it also reminds us of our responsibility to reduce and restrain our activities that will affect the natural processes. Living organisms also try to adjust themselves according to their habitat and changes in the ecosystems. The adaptations help them to survive better.