Chapter: Microbiology and Immunology: Laboratory Identification of Bacteria and Taxonomy

Catalase test is used to detect the presence of enzyme catalase in a bacterium. The enzyme catalase catalyzes the breakdown of hydrogen peroxide with the release of free oxygen. It is found in most aerobic and facultative anaerobic bacteria. The main exception is Streptococcus spp. It is not found in anaerobes.

Catalase test is primarily used to differentiate Staphylococcus and Streptococcus. In this test, a small amount of culture to be tested is picked up from a nutrient agar plate with a sterile platinum loop or glass rod and this is inserted into hydrogen peroxide solution (3%) held on a slide or in a tube. Immediate production of air bubbles in the solution denotes a positive test and no bubbles indicate a negative test.

This test determines the presence of enzyme oxidase in many bacteria. The enzyme oxidase catalyzes the oxidation of reduced cytochrome by molecular oxygen. Kovac’s oxidase reagent that contains tetramethyl-p-phenylenediamine dihydrochloride is the main reagent used in the oxidase test. The dye serves as an alternate substrate for the cytochrome oxidase reaction. In the reduced state, the reagent is colorless but when oxidized, it becomes purple. Oxidase test can be performed by several methods that include:

The dry filter paper method is performed by impregnating strips of filter paper with 1% Kovac’s oxidase reagent. The paper is smeared with the bacterial colonies to be tested by a glass rod. In a positive test, the smeared area on the filter paper turns deep purple within 10 seconds. No color change indicates nega-tive test (Color Photo 4).

Indole test is used to detect the ability of bacteria to decompose amino acid tryptophan to indole, which accumulates in the medium. Tryptophan or peptone broth is the medium used for indole test (Color Photo 5). The test is performed by inoculating the medium with bacteria, incubating at 37°C for 24–48 hours. Then, 5 drops of Kovac’s reagent containning amyl or isoamyl alcohol, p-dimethyl amino benzaldehyde, and concentrated hydro-chloric acid are added to the inoculated medium. Positive test is indicated by formation of a red ring at the surface of the medium. No color change indicates a negative test (Fig. 6-2). 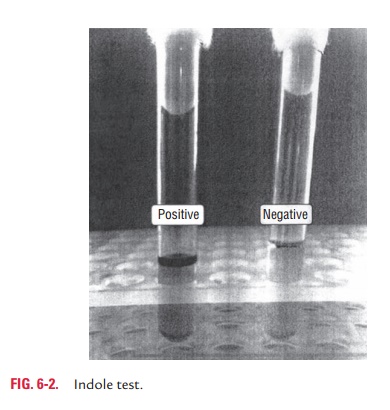 Precautions in interpretation of indole test are as follows: (a) cultures to be tested for indole production need to be incubated aerobically and (b) the optimum pH for tryptophanase activity is alkaline (pH 7.4–7.8), hence a decrease in pH results in decreased indole production and gives a possible false negative reaction.

Carbohydrate fermentation test is done to determine the ability of a bacterium to ferment a specific carbohydrate incorporated in a basal medium, producing acid or acid with visible gas. The carbohydrates include glucose, lactose, sucrose, maltose, etc. The sugar medium contains 1% sugar. Andrade’s indicator is a solution of acid fuchsin to which sodium hydroxide is added. It is a pH indicator that is added to the basal medium, which indicates the formation of organic acids.

The test is performed by inoculating the sugar media with bacteria, incubating at 37°C for 18–24 hours. The change of the color to pinkish red (acidic) is considered as a positive test result, whereas yellow to colorless (alkaline) sugar indicates negative test result. Production of gas is indicated by appear-ance of gas bubbles in Durham’s tube.

Oxidation–fermentation test (OF test) determines the oxida-tive or fermentative metabolism of a carbohydrate by a bacte-rium. The OF test is used to determine whether a bacterium has the enzymes necessary for the aerobic breakdown of glucose (i.e., oxidation) and/or for the fermentation of glucose. The test differentiates Enterobacteriaceae (fermenters) from the mem-bers of the family Pseudomonadaceae (the nonfermenters).

Kligler’s iron agar (KIA) and triple sugar iron agar (TSI) tests are used to determine the ability of an organism to attack a specific carbohydrate incorporated into a basal growth medium, with or without the production of gas, along with production of hydrogen sulfide. KIA medium contains two carbohydrates: lactose and glucose in a ratio of 10:1. TSI con-tains a third carbohydrate, i.e., sucrose, in addition to lactose and glucose.

The test is performed by inoculating KIA or TSI with an inoculating needle by stabbing the butt and streaking the slant and then incubating at 37°C for 18–24 hours. During incubation, the bacterium first utilizes glucose and then lactose and sucrose. After 18–24 hours, the glucose concentration is depleted in the slant and in the butt. The bacteria start oxidative degradation of the peptone present in the slant, resulting in the production of alkaline by-products, thereby changing the indicator to a red color. Anaerobic fermentation of glucose in the butt produces a large volume of acid, which neutralizes the alkalinity caused by peptone degradation; hence the butt continues to remain yellow. Yellow color (acidic), therefore, indicates fermentation of carbohydrates and red color (alkaline) indicates no fermentation. Presence of bubble in the butt indicates production of gas during fermentation of carbohydrates.

Three basic fermentation patterns are observed on KIA medium after incubation at 37°C for 24 hours:

1.        Fermentation of glucose only (alkali/acid or K/A reaction; K denotes alkaline reaction and A denotes acidic reaction): After 18–24 hours, the low glucoseconcentration is completely used up, and the organism starts to utilize the peptones present in the medium, resulting in an alkaline pH in slant (red). In the butt, a yellow color exists due to anaerobic degradation of glucose.

2.        Fermentation of lactose and glucose (acid/acid or A/A reaction): Lactose is present in 10 times the amount ofglucose. In 18–24 hours, the lactose is not depleted and therefore acidic conditions exist in the butt and slant.

3.        Neither lactose nor glucose fermented (alkali/alkali or K/K reaction): Many Gram-negative, nonenteric bacilliare unable to ferment glucose or lactose. A reaction of K/K is a result of aerobic catabolism of peptone by the organism.

Urease test is used to determine the ability of an organism to split urea to ammonia by the enzyme urease. Production of ammonia makes the medium alkaline; thus the indicator phe-nol red changes to red or pink in color.

The test is performed in Christensen’s urease medium. The medium is inoculated with the bacterial colony and incubated at 37°C. Urease-positive bacteria produce a pink color.

Citrate test is used to demonstrate the ability of an organism to utilize citrate as the sole source of carbon for metabolism. Koser’s citrate medium (a liquid medium) and Simmon's citrate medium (a solid medium) are used for the test. In this test, either of the medium is inoculated with the bacteria and then incu-bated at 37°C overnight. Growth on the Simmon's medium is accompanied by a rise in pH to change the medium from its initial green color to deep blue. Hence, growth with blue color on the slant indicates positive test and no growth without any color change indicates negative test. The medium needs to be lightly inoculated (from plate cultures, not from a broth) to avoid a carryover of nutrients, which may lead to a false positive result. In Koser’s liquid medium, turbidity indicates positive test and absence of turbidity indicates negative test.

Phenylalanine deaminase test indicates the ability of an organism to deaminate phenylalanine to phenylpyruvic acid (PPA), which reacts with ferric salts to give green color. This test is also called PPA test. The test is performed by inoculating the medium containing phenylalanine by the bacteria. After overnight incubation at 37°C, a few drops of 10% ferric chloride solution are added to the inoculated medium. If PPA is produced, the medium becomes green in color due to combination of ferric chloride with PPA, which indicates a positive test. Absence of any color change indicates a negative test. PPA-positive bacteria are Proteus spp., Providencia spp., and Morganella spp.

Nitrate reduction test is used to determine the presence of enzyme nitrate reductase in the bacteria. The enzyme reduces nitrate to nitrites or free nitrogen gas. The test is carried out by inoculating the broth containing 1% potassium nitrate (KNO3) and incubating at 37°C up to 5 days. Then 1–2 drops of a reagent that consists of a mixture of 1 mL of naphthylamine and 1 mL of sulfanilic acid is added. Red color developing within a few minutes signifies positive reaction, while absence of color indicates negative reaction.

Methyl red (MR) test detects the ability of an organism to produce and maintain stable acid end products during the fermentation of glucose, thereby maintaining a sustained pH below 4.5. The test is performed by inoculating a glucose phosphate broth and incubating it at 37°C for 2–5 days. Five drops of 0.04% of MR solution are then added to the inocu-lated medium, mixed, and the result is read immediately. Development of red color denotes a positive test, and yellow color indicates negative test. E. coli, Yersinia spp., and Listeriamonocytogenes are the examples of MR-test-positive bacteria.

It should be noted that if the MR test is performed too early, the results may produce a false positive reaction. This is because MR-negative organisms may not have adequate time to completely metabolize the initial acid products that have been produced during the fermentation of glucose.

Voges–Proskauer (VP) test detects the production of acetyl methyl carbinol (acetoin), a natural product formed from pyruvic acid in the course of glucose fermentation. The acetoin, in the presence of alkali and atmospheric oxygen, is oxidized to diacetyl that reacts with alpha-naphthol to produce red color. This test is performed by inoculating the glucose phosphate broth with the organism and incubating at 37°C for 48 hours. Then approximately 3 drops of alpha-naphthol is added followed by addition of 1 drop of 40% potassium hydroxide. The reagents are mixed well and are allowed to stand for 30 minutes. In positive test, pink color appears in 2–5 minutes, deepening to magenta in half an hour. The solution remains colorless for 30 minutes in negative test.

These tests are carried out to demonstrate H2S produced by certain bacteria. Production of H2S is demonstrated by inoculating the bacteria in the media containing lead acetate, ferric ammonium citrate, or ferrous acetate and incubating overnight at 37°C. H2S-producing bacteria by their enzymatic actions produce H2S from sulfur-containing amino acids in the medium. Production of sulfur produces black color in the media, visible to the naked eye.

P. mirabilis, P. vulgaris, and Salmonella spp. are some examplesof the H2S-producing bacteria.