According to section 5 of the Negotiable Instruments Act, “a bill of exchange is an instrument in writing containing an unconditional order, signed by the maker, directing a certain person to pay a certain sum of money only to, or to the order of a certain person or to the bearer of the instrument”.

Characteristics of a Bill of Exchange

i. A bill of exchange is a document in writing.

ii. The document must contain an order to pay.

iii. The order must be unconditional.

iv. The instrument must be signed by the person who draws it.

v. The name of the person on whom the bill is drawn must be specified in the bill itself.

vi. The drawer, drawee and payee must all be certain. A bill cannot be drawn on two or more drawees in the alternative because where liability lies, ‘no ambiguity must lie’. However, alternative payees are permitted in the law.

vii. The amount that is required to be paid must also be specified in the bill.

viii. The bill may be payable on demand or after a specified period.

ix. It must comply with formalities regarding date, consideration, stamps etc.,

According to section 6 of the Negotiable Instruments Act, 1881 defines a cheque as “a bill of exchange drawn on a specified banker and not expressed to be payable otherwise than on demand”.

Features of a Cheque

(i) Instrument in Writings

A cheque or a bill or a promissory note must be an instrument in writing. Though the law does not prohibit a cheque being written in pencil, bankers never accept it because of risks involved. Alternation is quite easy but detection impossible in such cases.

The instrument must contain an order to pay money. It is not necessary that the word ‘order’ or its equivalent must be used to make the document a cheque. It does not cease to be a cheque just because the world ‘please’ is used before the word pay. Further the order must be unconditional. In other words, payment of money is made dependent on the happening of an event or on a fulfilment of a condition, the instrument loses the characteristics of a cheque.

(iii) Drawn on a Specified Banker Only

The cheque is always drawn on a specified banker. A cheque vitally differs from a bill in this respect as latter can be drawn on any person including a banker. The customer of a banker can draw the cheque only on the particular branch of the bank where he has an account.

(iv) A Certain Sum of Money Only

The order must be for payment of only money. If the banker is asked to deliver securities, the document cannot be called a cheque. Further, the sum of money must be certain.

(v) Payee to be Certain

(vii) Signed by the Drawer

The cheque is to be signed by the drawer. Further, it should tally with specimen signature furnished to the bank at the time of opening the account.

Difference between a Bill of Exchange and a Cheque 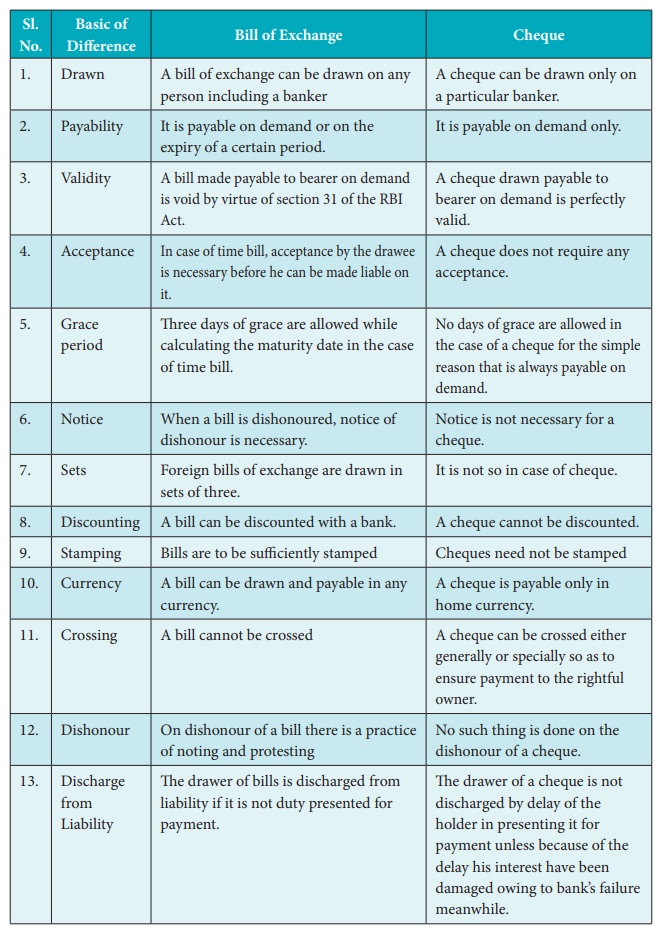 According to Section 4 of the Negotiable Instruments Act, “a promissory note is an instrument in writing (not being a bank note or a currency note) containing an unconditional undertaking singed by the maker, to pay a certain sum of money only to or to the order of, a certain person or to the bearer of the instrument.

Characteristics of a Promissory Note

2. It must contain a promise or undertaking to pay a mere acknowledgement of indebtedness will not make it a promissory note.

4. It must be signed by the maker. The signature must be in any part of the instrument and it need not be at the bottom.

5. The maker of the note must be a certain person. Where there are two or more  makers, they may bind themselves jointly or jointly and severability. But alternative promissors are not permitted in law because where liability lies no ambiguity must lie.

6. The payee must be certain. A note is valid even if the payee is misnamed or indicated by his official designation only. Alternative payees are permissible in law. But is must be made payable to order originally.

7. A promissory note originally made payable to bearer is illegal.

8. The promise must be for payment of money only. For eg. a note containing a promise to deliver 50 bags of rice is not a promissory note.

9. The sum payable must be certain and must be specified in the note itself.

10. The amount payable must be in legal tender money of India and a note containing a promise to pay a certain amount of foreign money is not a promissory note.

11. A bank note or a currency note is not a promissory note.

12. A promissory note must be sufficiently stamped.

Distinction between a Cheque and Promissory note 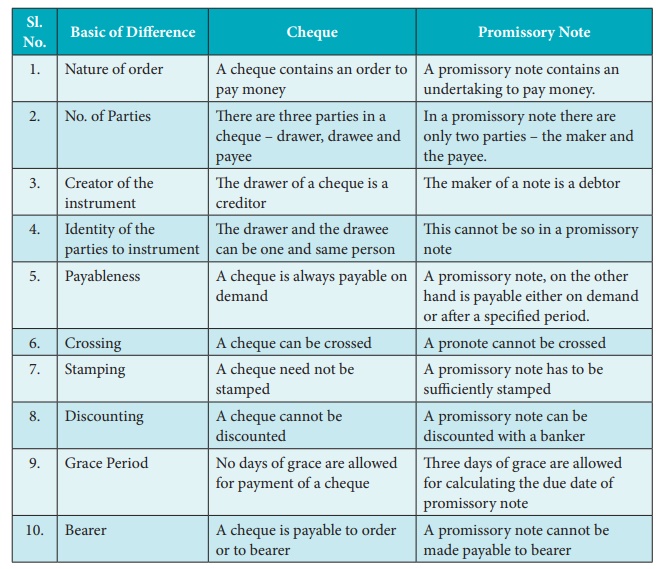 Distinction between a Bills of Exchange and Promissory note 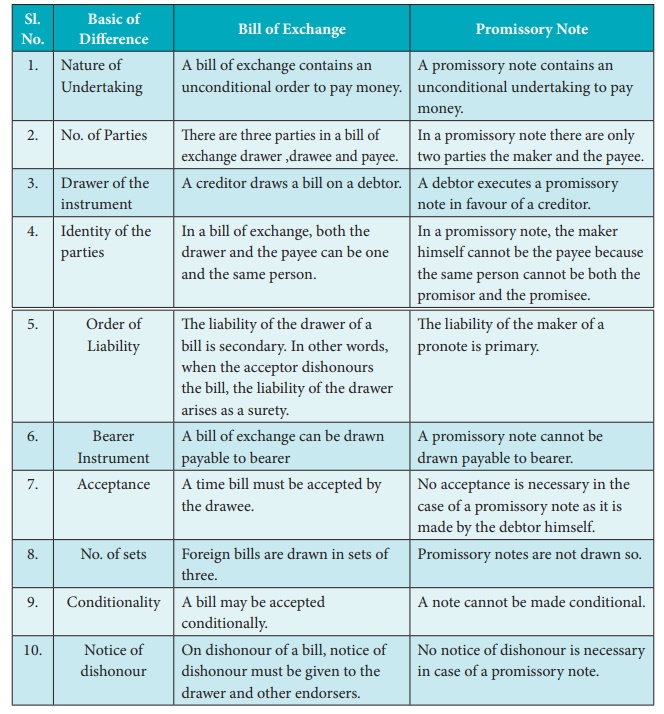