Muscarinic antagonists are sometimes called parasympatholytic because they block the effects of parasympathetic autonomic dis-charge.

Naturally occurring compounds with antimuscarinic effects have been known and used for millennia as medicines, poisons, and cosmetics. Atropine is the prototype of these drugs. Many similar plant alkaloids are known, and hundreds of synthetic anti-muscarinic compounds have been prepared.

A. Source and Chemistry

Atropine and its naturally occurring congeners are tertiary amine alkaloid esters of tropic acid (Figure 8–1). Atropine (hyoscyamine) is found in the plant Atropa belladonna, or deadly nightshade, and in Datura stramonium, also known as jimson-weed (Jamestown weed), sacred Datura, or thorn apple. Scopolamine (hyoscine) occurs in Hyoscyamus niger, or henbane, as the l(−) stereoisomer. Naturally occurring atropine is l(−)-hyoscyamine, but the com-pound readily racemizes, so the commercial material is racemic d,l-hyoscyamine. Thel(−) isomers of both alkaloids are at least100 times more potent than the d(+) isomers. 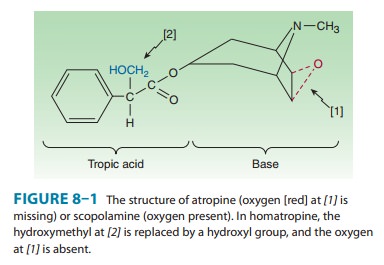 A variety of semisynthetic and fully synthetic molecules have anti-muscarinic effects. The tertiary members of these classes (Figure 8–2) are often used for their effects on the eye or the CNS. Many anti-histaminic , antipsychotic , and antidepressant  drugs have similar structures and, predictably, significant antimuscarinic effects. 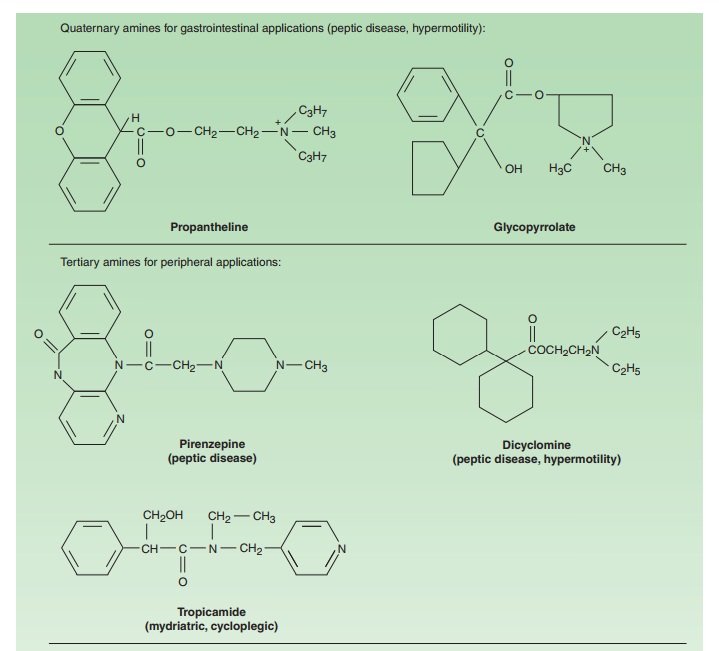 Natural alkaloids and most tertiary antimuscarinic drugs are well absorbed from the gut and conjunctival membranes. When applied in a suitable vehicle, some (eg, scopolamine) are even absorbed across the skin (transdermal route). In contrast, only 10–30% of a dose of a quaternary antimuscarinic drug is absorbed after oral administration, reflecting the decreased lipid solubility of the charged molecule.

Atropine and the other tertiary agents are widely distributed in the body. Significant levels are achieved in the CNS within 30 min-utes to 1 hour, and this can limit the dose tolerated when the drug is taken for its peripheral effects. Scopolamine is rapidly and fully distributed into the CNS where it has greater effects than most other antimuscarinic drugs. In contrast, the quaternary derivatives are poorly taken up by the brain and therefore are relatively free—at low doses—of CNS effects.

After administration, the elimination of atropine from the blood occurs in two phases: the t½ of the rapid phase is 2 hours and that of the slow phase is approximately 13 hours. About 50% of the dose is excreted unchanged in the urine. Most of the rest appears in the urine as hydrolysis and conjugation products. The drug’s effect on parasympathetic function declines rapidly in all organs except the eye. Effects on the iris and ciliary muscle persist for ≥ 72 hours.

Atropine causes reversible (surmountable) blockade  of cholinomimetic actions at muscarinic receptors; that is, block-ade by a small dose of atropine can be overcome by a larger con-centration of acetylcholine or equivalent muscarinic agonist. Mutation experiments suggest that aspartate in the third trans-membrane segment of the heptahelical receptor forms an ionic bond with the nitrogen atom of acetylcholine; this amino acid is also required for binding of antimuscarinic drugs. When atropine binds to the muscarinic receptor, it prevents actions such as the release of inositol trisphosphate (IP3) and the inhibition of adeny-lyl cyclase that are caused by muscarinic agonists . Muscarinic antagonists were traditionally viewed as neutral com-pounds that occupied the receptor and prevented agonist binding. Recent evidence indicates that muscarinic receptors are constitu-tively active, and most drugs that block the actions of acetylcho-line are inverse agonists  that shift the equilibrium to the inactive state of the receptor. Muscarinic blocking drugs that are inverse agonists include atropine, pirenzepine, trihexy-phenidyl, AF-DX 116, 4-DAMP, ipratropium, glycopyrrolate, and a methyl derivative of scopolamine (Table 8–1).

The effectiveness of antimuscarinic drugs varies with the tissue and with the source of agonist. Tissues most sensitive to atropine are the salivary, bronchial, and sweat glands. Secretion of acid by the gastric parietal cells is the least sensitive. In most tissues, antimusca-rinic agents block exogenously administered cholinoceptor agonists more effectively than endogenously released acetylcholine.

Atropine does not distinguish among the M1, M2, and M3 subgroups of muscarinic receptors. In contrast, other antimuscar-inic drugs are moderately selective for one or another of these subgroups (Table 8–1). Most synthetic antimuscarinic drugs are considerably less selective than atropine in interactions with non-muscarinic receptors. For example, some quaternary amine anti-muscarinic agents have significant ganglion-blocking actions, and others are potent histamine receptor blockers. The antimuscarinic effects of other agents, eg, antipsychotic and antidepressant drugs, have been mentioned. Their relative selectivity for muscarinic receptor subtypes has not been defined.

1. Central nervous system—In the doses usually used, atropinehas minimal stimulant effects on the CNS, especially the parasympa-thetic medullary centers, and a slower, longer-lasting sedative effect on the brain. Scopolamine has more marked central effects, producing drowsiness when given in recommended dosages and amnesia in sensi-tive individuals. In toxic doses, scopolamine, and to a lesser degree atropine, can cause excitement, agitation, hallucinations, and coma.

The tremor of Parkinson’s disease is reduced by centrally acting antimuscarinic drugs, and atropine—in the form of belladonna extract—was one of the first drugs used in the therapy of this dis-ease. As discussed, parkinsonian tremor and rigidity seem to result from a relative excess of cholinergic activity because of a deficiency of dopaminergic activity in the basal ganglia-stria-tum system. The combination of an antimuscarinic agent with a dopamine precursor drug (levodopa) can sometimes provide more effective therapy than either drug alone.

2. Eye—The pupillary constrictor muscle (see Figure 6–9) dependson muscarinic cholinoceptor activation. This activation is blocked by topical atropine and other tertiary antimuscarinic drugs and results in unopposed sympathetic dilator activity and mydriasis (Figure 8–3). Dilated pupils were considered cosmetically desirable during the Renaissance and account for the name belladonna (Italian, “beauti-ful lady”) applied to the plant and its active extract because of the use of the extract as eye drops during that time. 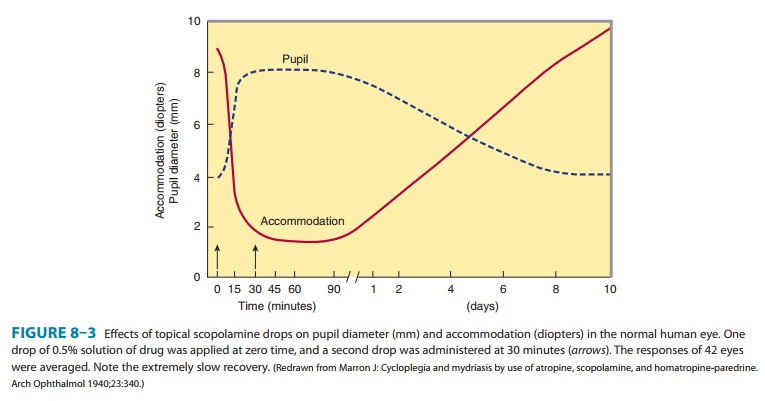 The second important ocular effect of antimuscarinic drugs is to weaken contraction of the ciliary muscle, or cycloplegia. Cycloplegia results in loss of the ability to accommodate; the fully atropinized eye cannot focus for near vision (Figure 8–3).

Both mydriasis and cycloplegia are useful in ophthalmology. They are also potentially hazardous, since acute glaucoma may be induced in patients with a narrow anterior chamber angle.

3. Cardiovascular system—The sinoatrial node is very sensi-tive to muscarinic receptor blockade. Moderate to high therapeu-tic doses of atropine cause tachycardia in the innervated and spontaneously beating heart by blockade of vagal slowing. However, lower doses often result in initial bradycardia before theeffects of peripheral vagal block become manifest (Figure 8–4). This slowing may be due to block of prejunctional M1 receptors (autoreceptors, see Figure 6–3) on vagal postganglionic fibers that normally limit acetylcholine release in the sinus node and other tissues. The same mechanisms operate in the atrioventricular node; in the presence of high vagal tone, atropine can significantly reduce the PR interval of the electrocardiogram by blocking mus-carinic receptors in the atrioventricular node. Muscarinic effects on atrial muscle are similarly blocked, but these effects are of no clinical significance except in atrial flutter and fibrillation. The ventricles are less affected by antimuscarinic drugs at therapeutic levels because of a lesser degree of vagal control. In toxic concen-trations, the drugs can cause intraventricular conduction block that has been attributed to a local anesthetic action.

Most blood vessels, except those in thoracic and abdominal viscera, receive no direct innervation from the parasympathetic system. However, parasympathetic nerve stimulation dilates coro-nary arteries, and sympathetic cholinergic nerves cause vasodilation in the skeletal muscle vascular bed . Atropine can block this vasodilation. Furthermore, almost all vessels contain endothelial muscarinic receptors that mediate vasodilation . These receptors are readily blocked by antimuscarinic 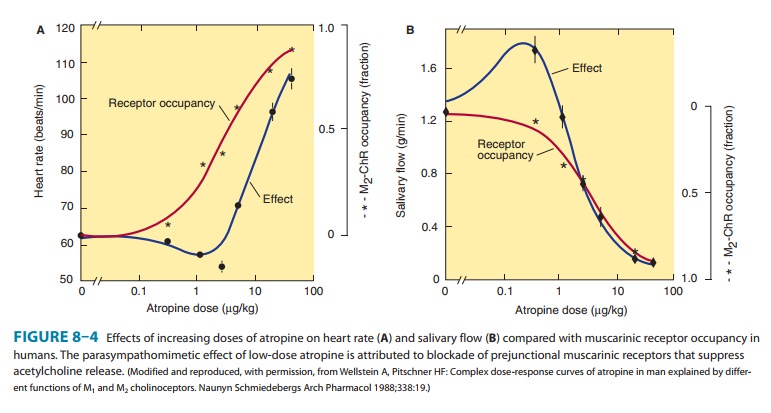 drugs. At toxic doses, and in some individuals at normal doses, antimuscarinic agents cause cutaneous vasodilation, especially in the upper portion of the body. The mechanism is unknown.

4. Respiratory system—Both smooth muscle and secretoryglands of the airway receive vagal innervation and contain muscarinic receptors. Even in normal individuals, administration of atropine can cause some bronchodilation and reduce secretion. The effect ismore significant in patients with airway disease, although the anti-muscarinic drugs are not as useful as the β-adrenoceptor stimulants in the treatment of asthma . The effectiveness of nonselective antimuscarinic drugs in treating chronic obstructive pulmonary disease (COPD) is limited because block of autoin-hibitory M2 receptors on postganglionic parasympathetic nerves can oppose the bronchodilation caused by block of M3 receptors on airway smooth muscle. Nevertheless, antimuscarinic agents are valuable in some patients with asthma or COPD.

Antimuscarinic drugs are frequently used before the adminis-tration of inhalant anesthetics to reduce the accumulation of secretions in the trachea and the possibility of laryngospasm.

5. Gastrointestinal tract—Blockade of muscarinic receptorshas dramatic effects on motility and some of the secretory func-tions of the gut. However, even complete muscarinic block cannot totally abolish activity in this organ system, since local hormones and noncholinergic neurons in the enteric nervous system  also modulate gastrointestinal function. As in other tissues, exogenously administered muscarinic stimulants are more effectively blocked than are the effects of parasympathetic (vagal) nerve activity. The removal of autoinhibition, a negative feedback mechanism by which neural acetylcholine suppresses its own release, might explain the lower efficacy of antimuscarinic drugs against the effects of endogenous acetylcholine. 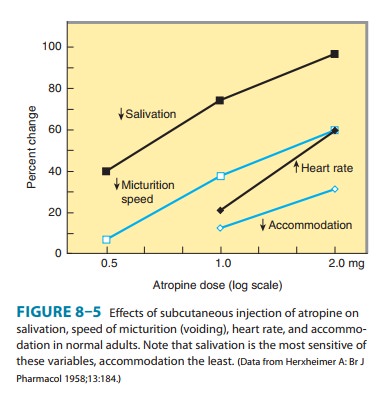 Antimuscarinic drugs have marked effects on salivary secretion; dry mouth occurs frequently in patients taking antimuscarinic drugs for Parkinson’s disease or urinary conditions (Figure 8–5). Gastric secretion is blocked less effectively: the volume and amount of acid, pepsin, and mucin are all reduced, but large doses of atropine may be required. Basal secretion is blocked more effectively than that stimulated by food, nicotine, or alcohol. Pirenzepine and a more potent analog, telenzepine, reduce gastric acid secretion with fewer adverse effects than atropine and other less selective agents. This was thought to result from a selective blockade of excitatory M1 muscar-inic receptors on vagal ganglion cells innervating the stomach, as suggested by their high ratio of M1 to M3 affinity (Table 8–1). However, carbachol was found to stimulate gastric acid secretion in animals with M1 receptors knocked out; M3 receptors were impli-cated and pirenzepine opposed this effect of carbachol, an indication that pirenzepine is selective but not specific for M1 receptors. The mechanism of vagal regulation of gastric acid secretion likely involves multiple muscarinic receptor-dependent pathways. Pirenzepine and telenzepine are investigational in the USA. Pancreatic and intestinal secretion are little affected by atropine; these processes are primarily under hormonal rather than vagal control.

Gastrointestinal smooth muscle motility is affected from the stomach to the colon. In general, the walls of the viscera are relaxed, and both tone and propulsive movements are diminished. Therefore, gastric emptying time is prolonged, and intestinal tran-sit time is lengthened. Diarrhea due to overdosage with parasym-pathomimetic agents is readily stopped, and even diarrhea caused by nonautonomic agents can usually be temporarily controlled. However, intestinal “paralysis” induced by antimuscarinic drugs is temporary; local mechanisms within the enteric nervous system usually reestablish at least some peristalsis after 1–3 days of anti-muscarinic drug therapy.

6. Genitourinary tract—The antimuscarinic action of atropineand its analogs relaxes smooth muscle of the ureters and bladder wall and slows voiding (Figure 8–5). This action is useful in the treatment of spasm induced by mild inflammation, surgery, and certain neurologic conditions, but it can precipitate urinary reten-tion in men who have prostatic hyperplasia (see following section, Clinical Pharmacology of the Muscarinic Receptor-Blocking Drugs). The antimuscarinic drugs have no significant effect on the uterus.

7. Sweat glands—Atropine suppresses thermoregulatory sweat-ing. Sympathetic cholinergic fibers innervate eccrine sweat glands, and their muscarinic receptors are readily accessible to antimusca-rinic drugs. In adults, body temperature is elevated by this effect only if large doses are administered, but in infants and children even ordinary doses may cause “atropine fever.”