Lithium was first used therapeutically in the mid-19th century in patients with gout.

Lithium was first used therapeutically in the mid-19th century in patients with gout. It was briefly used as a substitute for sodium chloride in hypertensive patients in the 1940s but was banned after it proved too toxic for use without monitoring. In 1949, Cade dis-covered that lithium was an effective treatment for bipolar disorder, engendering a series of controlled trials that confirmed its efficacy as monotherapy for the manic phase of bipolar disorder.

Lithium is a small monovalent cation. Its pharmacokinetics are summarized in Table 29–5. 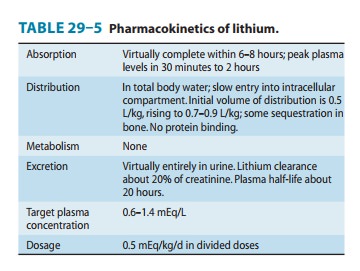 It both suppresses inositol signaling through depletion of intracellular inositol and inhibits glycogen synthase kinase-3 (GSK-3), a multifunctional protein kinase. GSK-3 is a component of diverse intracellular signaling pathways. These include signaling via insulin/insulin-like growth factor, brain-derived neurotrophic factor (BDNF), and the Wnt pathway. All of these lead to inhibition of GSK-3. GSK-3 phosphorylates β-catenin, resulting in interaction with transcription factors. The pathways that are facilitated in this manner modulate energy metabolism, provide neuroprotection, and increase neuroplasticity.

A. Effects on Electrolytes and Ion Transport

Lithium is closely related to sodium in its properties. It can substitute for sodium in generating action potentials and in Na+-Na+ exchange across the membrane. It inhibits the latter process; that is, Li+-Na+ exchange is gradually slowed after lithium is introduced into the body. At therapeutic concentrations (around 1 mmol/L), it does not signifi-cantly affect the Na+-Ca2+ exchanger or the Na+/K+-ATPase pump.

B. Effects on Second Messengers

Some of the enzymes affected by lithium are listed in Table 29–6. One of the best-defined effects of lithium is its action on inositol phosphates. 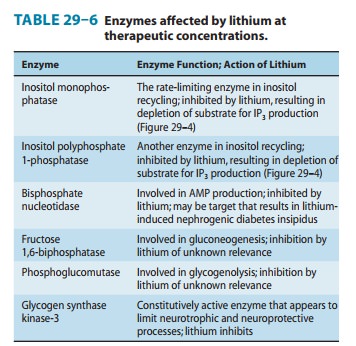 Early studies of lithium demonstrated changes in brain inositol phosphate levels, but the significance of these changes was not appreciated until the second-messenger roles of inositol-1,4,5-trisphosphate (IP3) and diacylglycerol (DAG) were discovered. As described, inositol trisphosphate and diacylglycerol are important second messengers for both α-adrenergic and muscarinic transmission. Lithium inhibits inositol monophosphatase (IMPase) and other important enzymes in the normal recycling of membrane phosphoinositides, including conversion of IP2 (inositol diphos-phate) to IP1 (inositol monophosphate) and the conversion of IP1 to inositol (Figure 29–4). This block leads to a depletion of free inositol and ultimately of phosphatidylinositol-4,5-bisphosphate (PIP2), the membrane precursor of IP3 and DAG. Over time, the effects of transmitters on the cell diminish in proportion to the amount of activity in the PIP2-dependent pathways. The activity of these pathways is postulated to be markedly increased during a manic episode. Treatment with lithium would be expected to diminish the activity in these circuits.

Studies of noradrenergic effects in isolated brain tissue indicate that lithium can inhibit norepinephrine-sensitive adenylyl cyclase. Such an effect could relate to both its antidepressant and its anti-manic effects. The relationship of these effects to lithium’s actions on IP3 mechanisms is currently unknown. 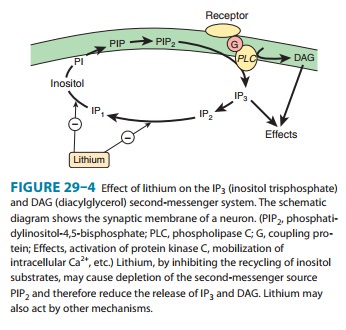 Because lithium affects second-messenger systems involving both activation of adenylyl cyclase and phosphoinositol turnover, it is not surprising that G proteins are also found to be affected. Several studies suggest that lithium may uncouple receptors from their G proteins; indeed, two of lithium’s most common side effects, polyuria and subclinical hypothyroidism, may be due to uncoupling of the vasopressin and thyroid-stimulating hormone (TSH) receptors from their G proteins.

The major current working hypothesis for lithium’s therapeutic mechanism of action supposes that its effects on phosphoinositolturnover, leading to an early relative reduction of myoinositol in human brain, are part of an initiating cascade of intracellular changes. Effects on specific isoforms of protein kinase C may be most relevant. Alterations of protein kinase C-mediated signaling alter gene expres-sion and the production of proteins implicated in long-term neuro-plastic events that could underlie long-term mood stabilization.