Members of the genus Bartonella are very small Gram-negative bacilli transmitted by arthropods.

Members of the genus Bartonella are very small Gram-negative bacilli transmitted by arthropods. The bacteria are Gram-negative aerobic bacilli and are fastidious in growth. They cause infections in mammalian host by invading endothelial cells and red blood cells. Bartonella species are found in a variety of animal hosts and are typically present without evidence of the disease. The genus Bartonella consists of 11 species, of which five are associated with human diseases (Table 47-3). 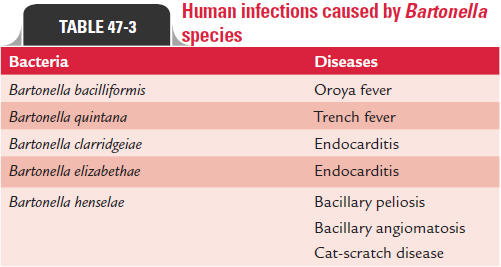 B. bacilliformis is the causative agent of Oroya fever, an acutefebrile illness consisting of severe anemia. This condition was first identified in the mountainous parts of Peru in 1870 during the laying of railway lines from Lima to Oroya in Peru. The outbreak of Oroya fever killed 1000 of workers associated with this railway project.

B. bacilliformis are short Gram-negative coccobacilli measur-ing 0.3–0.5 3 1.0–1.7 mm. The bacteria occur singly, in pairs, in chains, or in clumps. They are motile by the presence of as many as 10 flagella at one pole of the bacteria. They are aerobic and require an optimum pH of 7.8 and optimum temperature of 25–28°C for their growth.

Oroya fever is restricted in its geographical distribution and is mainly confined to Peru, Columbia, and Ecuador in South America.

The laboratory diagnosis of the condition is made by demonstration of intracellular bacteria in blood smear stained by Giemsa. The bacteria are found in the cytoplasm. Bacteria can be isolated from blood in enriched blood agar.

Penicillin, streptomycin, tetracycline, and chlorampheni-col are effective for the treatment of B. bacilliformis infection. Use of insecticides, such as DDT to kill the sand fly prevents transmission of the disease.

B. quintana was earlier known as Rochalimaea quintana as acausative agent of trench fever or five-day fever. This condi-tion was first recognized in the soldiers fighting in trenches in Europe during the first World War. The causative agent was earlier identified as a rickettsia and named Rickettsia quin-tana because it caused a five-day fever (from quintana, meansfifth), a synonym for trench fever. The organism subsequently was found not to be a rickettsia and differed from latter by its ability to grow in cell-free media, such as blood agar, hence was separated into a new genus Rochalimaea. Currently, it has undergone further taxonomical classification and has been reclassified as B. quintana.

B. quintana is a small Gram-negative bacillus (0.3–0.531.0–1.7 mm) and is nonmotile. It grows slowly on sheep or rabbit blood agar at 37°C in presence of 5% CO2. It requires prolonged incubation of 1–2 weeks to produce demonstrable colonies.

B. quintana is transmitted by the body louse. The lice becomeinfectious 5–9 days after feeding on a trench fever patient, after which the lice remain infectious throughout their life and excrete organisms in their feces. The infected lice when bites a new host defecates on surface of the skin. When this feces comes in contact with minor scratches or abrasions on the surface of the skin, the bacteria present in the feces enter the skin and initiate the infection.

Trench fever has an incubation period of 14–30 days. The condition can vary from asymptomatic to symptomatic infection. Severe headache, fever (giving the name of the disease as five-day fever), chills, weakness, and severe pain in the back and legs are the common manifestations of symptomatic cases. The condition is also associated with the presence of rashes on the chest, abdomen, or back. The infection does not cause death of the patient, but can produce a very severe debilitating illness. Trench fever is an exclusively human disease. No animal reser-voir for this disease has been identified. The disease is transmit-ted from humans to humans by the human body louse vector

B. henselae is the causative agent of cat-scratch disease. The dis-ease follows scratches and bite of the cat or with the bite of cat fleas. B. henselae is a small Gram-negative bacillus measur-ing 2.0–2.5 3 0.5–0.6 mm. Like other Bartonella species, it can grow on chocolate agar or Columbia agar supplemented with 5% sheep or rabbit blood. B. henselae produces dry white cauli-flower-like colonies after 5–15 days of incubation at 35–37°C in the presence of 5% CO2.

B. henselae typically causes cat-scratch disease. It is a benign con-dition characterized by regional lymphadenopathy and fever. The cervical and axillary lymph nodes are most commonly affected. Usually, single lymph node is affected in 50% of the cases.

B. henselae also causes bacillary angiomatosis, a conditionresembling Kaposi sarcoma in patients with AIDS. The skin, lymph nodes, or liver and spleen are primarily involved in this con-dition. The bacteria also cause subacute bacterial endocarditis.

Laboratory diagnosis is confirmed by demonstration of clusters of B. henselae in lymph node biopsy smears stained with Warthin Starry impregnation stain. The bacteria can also be isolated by cul-ture on chocolate agar or Columbia agar enriched with sheep or rabbit blood on incubation for 3 weeks or more. Gentamicin and erythromycin are effective for the treatment of the condition.