Many problems are difficult to solve algorithmically. Backtracking makes it possible to solve at least some large instances of difficult combinatorial problems.

Many problems are difficult to solve algorithmically. Backtracking makes it possible to solve at least some large instances of difficult combinatorial problems.

The principal idea is to construct solutions one component at a time and evaluate such partially constructed candidates as follows.

problem‘s constraints, it is done by taking the first remaining legitimate option for the next component.

If there is no legitimate option for the next component, no alternatives for any

remaining component need to be considered. In this case, the algorithm backtracks to replace the last component of the partially constructed solution with its next option.

It is convenient to implement this kind of processing by constructing a tree of choices being made, called the state-space tree. Its root represents an initial state before the search for a solution begins. The nodes of the first level in the tree represent the choices made for the first component of a solution; the nodes of the second level represent the choices for the second component, and so on.

A node in a state-space tree is said to be promising if it corresponds to a partially constructed solution that may still lead to a complete solution; otherwise, it is called nonpromising.

Leaves represent either nonpromising dead ends or complete solutions found by the algorithm.

The problem is to place it queens on an n-by-n chessboard so that no two queens attack each other by being in the same row or in the same column or on the same diagonal. For n = 1, the problem has a trivial solution, and it is easy to see that there is no solution for n = 2 and n =3. So let us consider the four-queens problem and solve it by the backtracking technique. Since each of the four queens has to be placed in its own row, all we need to do is to assign a column for each queen on the board presented in the following figure. 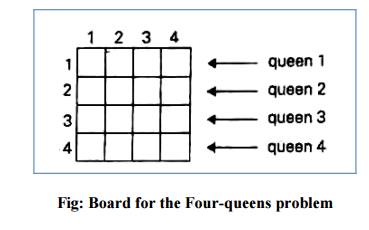 Steps to be followed

We start with the empty board and then place queen 1 in the first possible position of its row, which is in column 1 of row 1.

(x denotes an unsuccessful attempt to place a queen in the indicated column. The numbers above the nodes indicate the order in which the nodes are generated)

If other solutions need to be found, the algorithm can simply resume its operations at the leaf at which it stopped. Alternatively, we can use the board‘s symmetry for this purpose.

It is convenient to sort the set‘s elements in increasing order. So we will assume

The root of the tree represents the starting point, with no decisions about the given elements made as yet.

Its left and right children represent, respectively, inclusion and exclusion ofs1 in a set being sought.

Thus, a path from the root to a node on the ith level of the tree indicates which of the first i numbers have been included in the subsets represented by that node.

We record the value of s‘ the sum of these numbers, in the node, Ifs is equal to d. we have a solution to the problem.

We can either, report this result and stop or, if all the solutions need to he found, continue by backtracking to the node‘s parent.

If s‘ is not equal to d, we can terminate the node as nonpromising if either of the two inequalities holds: 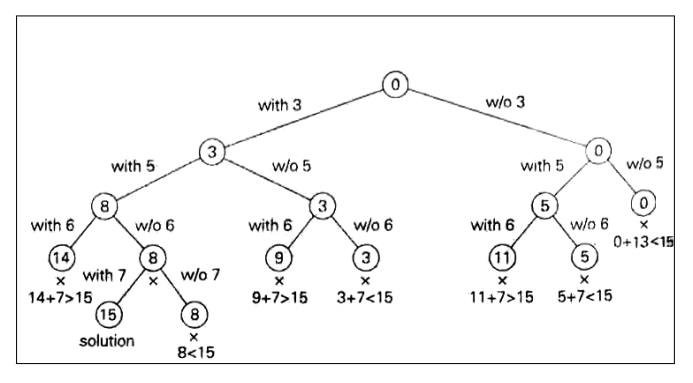 (applied to the instance S = (3, 5, 6, 7) and d = 15 of the subset-sum problem. The number inside a node is the sum of the elements already included in subsets represented by the node. The inequality below a leaf indicates the reason for its termination)

A coloring of a graph is an assignment of a color to each vertex of the graph so that no two vertices connected by an edge have the same color. It is not hard to see that our problem is one of coloring the graph of incompatible turns using as few colors as possible.

The problem of coloring graphs has been studied for many decades, and the theory of algorithms tells us a lot about this problem. Unfortunately, coloring an arbitrary graph with as few colors as possible is one of a large class of problems called "NP-complete problems," for which all known solutions are essentially of the type "try all possibilities."

The set V consists of a vertex for each variable, a vertex for the negation of each variable, 5 vertices for each clause, and 3 special vertices: TRUE, FALSE, and RED. The edges of the graph are of two types: "literal" edges that are independent of the clauses and "clause" edges that depend on the clauses. The literal edges form a triangle on the special vertices and also form a triangle on x, ¬x, and RED for i = 1, 2,..., n.

Argue that for any truth assignment for φ, there is a 3-coloring of the graph containing just the literal edges.

The widget is used to enforce the condition corresponding to a clause (x y z). Each clause requires a unique copy of the 5 vertices that are heavily shaded; they connect as shown to the literals of the clause and the special vertex TRUE.

Fig: The widget corresponding to a clause (x  y z), used in Problem

The first component of our future solution, if it exists, is a first intermediate vertex of a Hamiltonian cycle to be constructed. Using the alphabet order to break the three-way tie among the vertices adjacent to a, we select vertex b. From b, the algorithm proceeds to c, then to d, then to e, and finally to f, which proves to be a dead end. So the algorithm backtracks from f to e, then to d. and then to c, which provides the first alternative for the algorithm to pursue.

Going from c to e eventually proves useless, and the algorithm has to backtrack from e to c and then to b. From there, it goes to the vertices f, e, c, and d, from which it can legitimately return to a, yielding the Hamiltonian circuit a, b, f, e, c, d, a. If we wanted to find another Hamiltonian circuit, we could continue this process by backtracking from the leaf of the solution found. 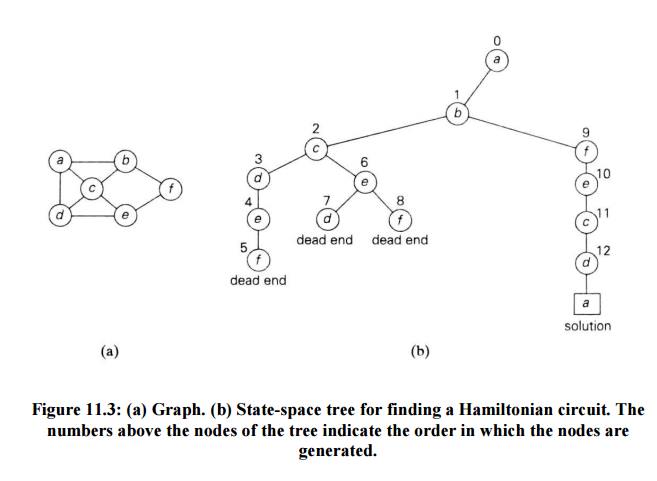 Figure 11.3: (a) Graph. (b) State-space tree for finding a Hamiltonian circuit. The numbers above the nodes of the tree indicate the order in which the nodes are generated.

The knapsack problem or rucksack problem is a problem in combinatorial optimization: Given a set of items, each with a weight and a value, determine the number of each item to include in a collection so that the total weight is less than a given limit and the total value is as large as possible.

It derives its name from the problem faced by someone who is constrained by a fixed-size knapsack and must fill it with the most useful items.

The decision problem form of the knapsack problem is the question "can a value of at least V be achieved without exceeding the weight W?"

E.g. A thief enters a store and sees the following items:

What should he steal to maximize profit?

Thief can take a fraction of an item. 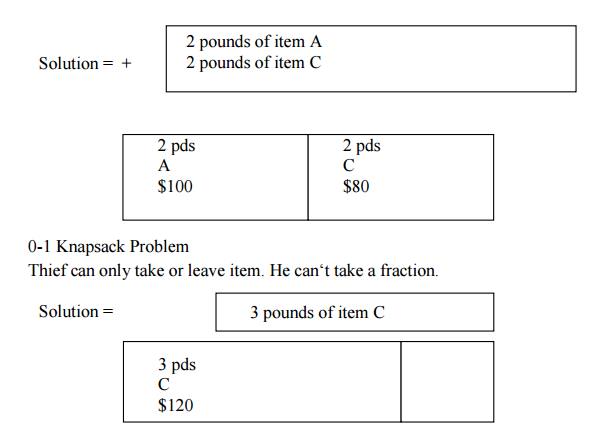 Fractional Knapsack has a greedy solution 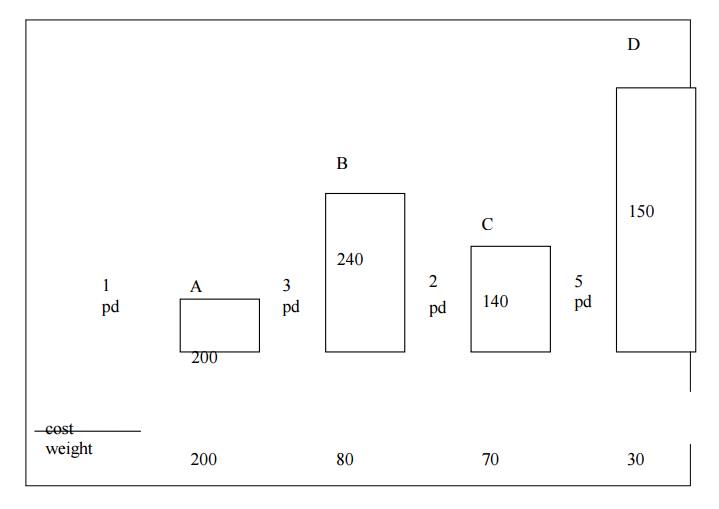 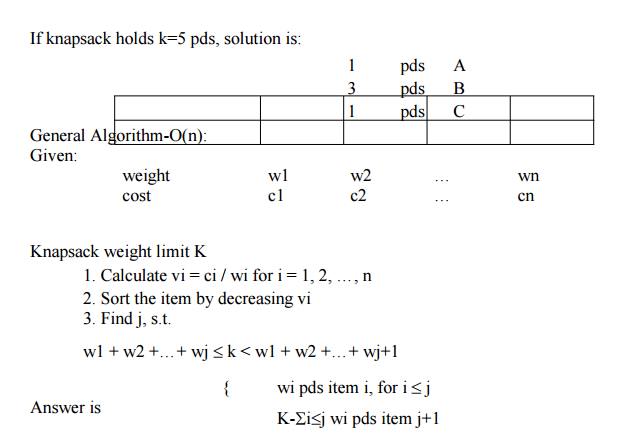