The major plant auxin is indole-3-acetic acid (IAA). A number of other compounds with auxin activity include phenoxyacetic acid and indole 3-butyric acid (Fig. 1).

The major plant auxin is indole-3-acetic acid (IAA). A number of other compounds with auxin activity include phenoxyacetic acid and indole 3-butyric acid (Fig. 1).

Elongation growth. The primary effect of auxin is to regulate stem growth. It does this by stimulating the growth of cells in the direction of elongation. Shoot growth is stimulated by 10–10–7M auxin. Root elongation, on the other hand, is much more sensitive, with maximum stimulation of growth at 10–9–10–10M auxin, and inhibition at higher concentrations. 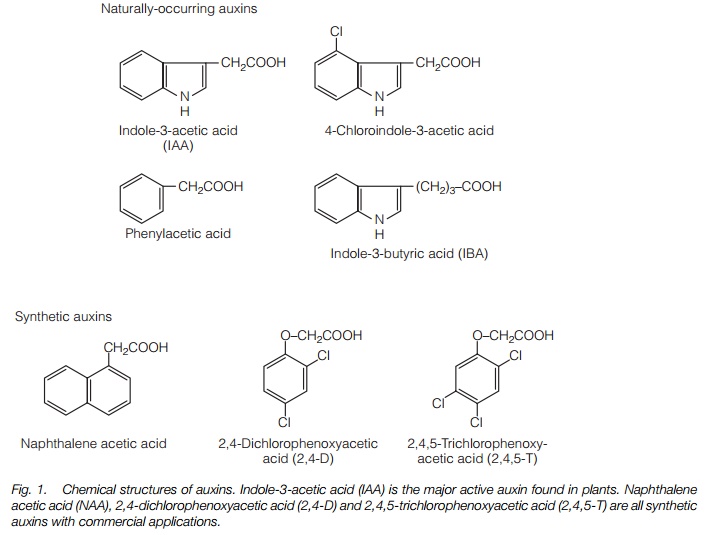 Cell division and differentiation. When callus, an amorphous mass of undifferentiated cells (Topic F1) is grown on an agar plate containing nutrients, the degree of cell division and differentiation to form roots and shoots can be varied by altering the auxin:cytokinin ratio. Both hormones are required; Figure 2 summarizes the results of such an experiment. These effects are also found in plants where auxins induce lateral root formation in stem cuttings. 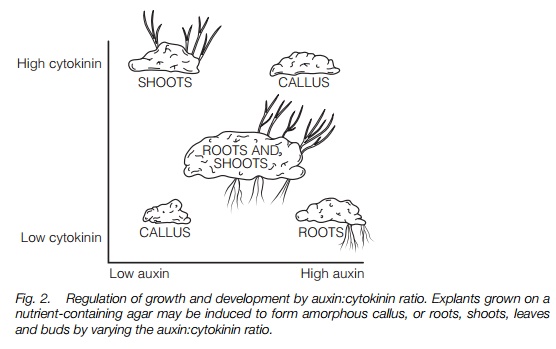 Apical dominance. A characteristic of the growth of many plants is the dominant growth of the apical bud. When this bud is removed, growth of axillary buds formed a little way behind the apex is stimulated, until one of them becomes dominant and the growth of the others is suppressed. Replacement of the apical bud with auxin inhibits the axillary buds, suggesting that high auxin concentrations generated at the apex inhibit axillary buds. Application of cytokinin to axilliary buds releases them from inhibition and therefore auxin–cytokinin interactions are responsible for the phenomenon.

Other auxin effects. Auxin has a range of other effects, either alone or with other hormones, including fruit development. Some plants, e.g. strawberry, tomato, cucumber, pumpkin, citrus fruits, produce parthenocarpic (seedless) fruits if they are treated with auxin. Senescence and abscission of mature leaves, fruits and flowers is inhibited by auxin; however, abscission of young fruits is enhanced by auxin treatment.

Synthetic auxins find widespread application in agriculture and horticulture. At high concentrations, 2,4-dichlorophenoxyacetic acid (2,4-D) and 2,4,5-trichlorophenoxyacetic acid (2,4,5-T) (Fig. 1) are used as herbicides, particularly on broad-leaved plants, which are much more sensitive to them than monocots. Naphthalene acetic acid (NAA) is used to stimulate rooting of cuttings (‘hormone rooting powder’), while other synthetic auxins are used to reduce fruit number early in the season in apples and to promote fruiting in tomatoes and citrus fruits.

Auxins are mostly synthesized from the amino acid tryptophan, predominantly in young leaves, shoot meristems and developing fruits, wherever cells are  dividing rapidly. IAA is also made by bacteria (see Agrobacterium tumifaciens,

Topic P3) and several pathways exist, including one in which IAA is synthesized from indole or indole-3-glycerol phosphate rather than tryptophan.

Auxin shows polar transport (unidirectional). It moves basipetally (from the apex to the base) in isolated coleoptiles (the sheath encasing the primary leaf in a grass) and stems. Small amounts of auxins produced at the root apex may also move basipetally (in this case from the root tip up the root) but this is limited in comparison with that from the shoot. Polar transport in stems occurs in the parenchyma surrounding the vascular tissue involving specific auxin transportproteins. Its transport can be inhibited by auxin transport inhibitors such as 1-N-naphthylphthalamic acid (NPA). Auxin synthesized in the leaves is also transported in a non-polar fashion in the phloem; this process is about 10 times faster than polar transport. Studies in Arabidopsis have revealed a gene, AUX1,expressed in the root apex, which encodes an auxin transport protein which is involved in directional elongation, for instance in gravitropism (Topic G2).

The amount of auxin available in a cell or tissue depends on three processes. The rate of auxin biosynthesis or import from other cells, the rate of auxin degradation and the amount that is conjugated (chemically bound) to other molecules. Conjugated auxin is not biologically active. Most auxin within a plant is covalently bonded to organic compounds (e.g. esters of myo-inositol and glucose, and high-molecular weight compounds such as glycoproteins) and is inactive. Transport of IAA in the phloem is predominantly in the form of these complexes, and their breakdown to release IAA supplies it to tissues like the coleoptile tip. There are several pathways for IAA breakdown, involving peroxidation of IAA to 3-methyleneoxindole and non-decarboxylation to oxindole-3-acetic acid.