Association : It is a simple structural connection or channel between classes and is a relationship where all objects have their own lifecycle and there is no owner.

It is a simple structural connection or channel between classes and is a relationship where all objects have their own lifecycle and there is no owner. Lets take an example of Department and Student. Multiple students can associate with a single Department and single student can associate with multiple Departments, but there is no ownership between the objects and both have their own lifecycle. Both can create and delete independently. Here is respective Model and Code for the above example. 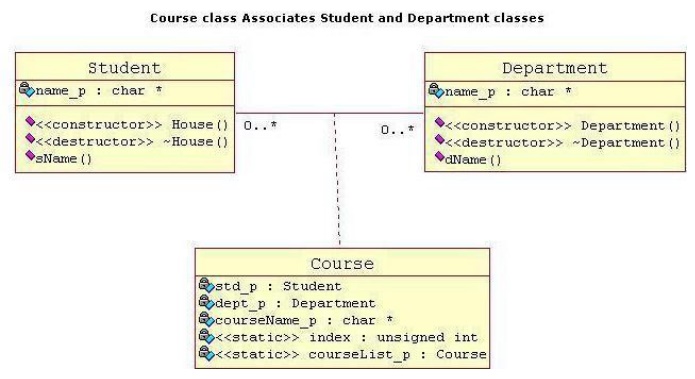 1.     Typically we use normal member variables

2.     Can use pointer values if the composition class automatically handles allocation/deallocation

3.     Responsible for creation/destruction of subclasses

Lets take an example of a relationship between House and it's Rooms. House can contain multiple rooms there is no independent life for room and any room can not belong to two different house. If we delete the house room will also be automatically deleted. Here is respective Model and Code for the above example.

ü    Activity diagram is another important diagram in UML to describe dynamic aspects of the system.

ü    Activity diagram is basically a flow chart to represent the flow form one activity to another activity. The activity can be described as an operation of the system.

ü    So the control flow is drawn from one operation to another. This flow can be sequential, branched or concurrent. Activity diagrams deals with all type of flow control by using different elements like fork, join etc.

ü    Activity is a particular operation of the system. Activity diagrams are not only used for visualizing dynamic nature of a system but they are also used to construct the executable system by using forward and reverse engineering techniques. The only missing thing in activity diagram is the message part.

ü    It does not show any message flow from one activity to another. Activity diagram is some time considered as the flow chart. Although the diagrams looks like a flow chart but it is not. It shows different flow like parallel, branched, concurrent and single.

ü    So the purposes can be described as:

ü    Draw the activity flow of a system.

ü    Describe the sequence from one activity to another.

ü    Describe the parallel, branched and concurrent flow of the system.

How to draw Component Diagram?

ü    So before drawing an activity diagram we should identify the following elements:

ü    Once the above mentioned parameters are identified we need to make a mental layout of the entire flow. This mental layout is then transformed into an activity diagram.

ü    The following diagram is drawn with the four main activities:

After receiving the order request condition checks are performed to check if it is normal or special order. After the type of order is identified dispatch activity is performed and that is marked as the termination of the process. 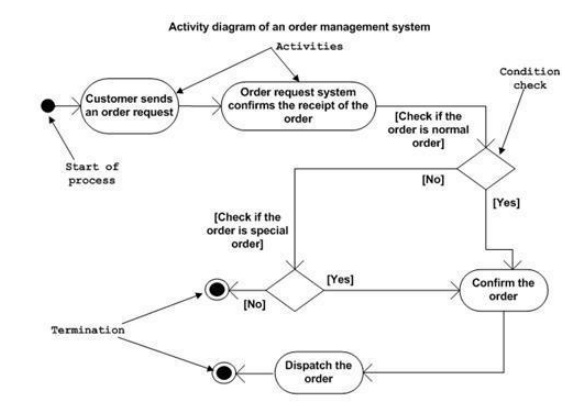 Where to use Interaction Diagrams?

ü    The basic usage of activity diagram is similar to other four UML diagrams. The specific usage is to model the control flow from one activity to another. This control flow does not include messages.

ü    The activity diagram is suitable for modeling the activity flow of the system. An application can have multiple systems. Activity diagram also captures these systems and describes flow from one system to another. This specific usage is not available in other diagrams. These systems can be database, external queues or any other system.

ü    This diagram is used to model the activities which are nothing but business requirements. So the diagram has more impact on business understanding rather implementation details.

ü    Following are the main usages of activity diagram:

ü    UML sequence diagrams are used to represent or model the flow of messages, events and actions between the objects or components of a system. Time is represented in the vertical direction showing the sequence of interactions of the header elements, which are displayed horizontally at the top of the diagram.

ü    Sequence Diagrams are used primarily to design, document and validate the architecture, interfaces and logic of the system by describing the sequence of actions that need to be performed to complete a task or scenario.

ü    in sequence diagrams and when they are used. These are the diagram elements that are supported by the Sequence Diagram Editor tool. Some are not part of the UML are useful design tools because they provide a dynamic view of the system behavior which can be difficult to extract from static diagrams or specifications. Although UML sequence diagrams are typically used to describe object-oriented software systems, they are also extremely useful as system engineering tools to design system architectures, in business process engineering as process flow diagrams, as message sequence charts and call flows for telecom/wireless system design, and for protocol stack design and analysis.

ü    It describes the basic drawing elements used specification and may not be supported by other UML tools.

ü    The header portion of the sequence diagram represents the components or objects of the system being modeled and are laid out horizontally at the top of the diagram.

Represents an external person or entity that interacts with the system

What can be modeled using sequence diagrams?

Complex interactions between components. Sequence diagrams are often used to design the interactions between components of a system that need to work together to accomplish a task. They are particularly useful when the components are being developed in parallel by different teams (typical in wireless and telephony systems) because they support the design of robust interfaces that cover multiple scenarios and special cases.

Use case elaboration. Usage scenarios describe a way the system may be used by its actors. The UML sequence diagram can be used to flesh out the details of one or more use cases by illustrating visually how the system will behave in a particular scenario. The use cases along with their corresponding sequence diagrams describe the expected behavior of the system and form a strong foundation for the development of system architectures with robust interfaces.

Distributed & web-based systems. When a system consists of distributed components (such as a client communicating with one or more servers over the Internet), sequence diagrams can be used to document and validate the architecture, interfaces and logic of each of these components for a set of usage scenarios.

Complex logic. UML sequence diagrams are often used to model the logic of a complex feature by showing the interactions between the various objects that collaborate to implement each scenario. Modeling multiple scenarios showing different aspects of the feature helps developers take into account special cases during implementation.

State machines. Telecom, wireless and embedded systems make extensive use of state machine based designs where one or more state machines communicate with each other and with external entities to perform their work. For example, each task in the protocol stack of a cellular phone goes through a series of states to perform actions such as setup a call or register with a new base station. Similarly the call processing components of a Mobile Switching Center use state machines to control the registration and transfer of calls to roaming subscribers. Sequence diagrams (or call flows as they are commonly referred to in the telecom and wireless industry) are useful for these types of applications because they can visually depict the messages being exchanged between the components and their associated state transitions.