Unlike the IMF which is largely self-financing, Multilateral Development Banks (MDBs) are highly dependent on shareholder contributions particularly in terms of financing their operations of their soft loan windows, that provide grants and low interest loans to very poor countries. MDBs belong to a complex set of public institutions.

Unlike the IMF which is largely self-financing, Multilateral Development Banks (MDBs) are highly dependent on shareholder contributions particularly in terms of financing their operations of their soft loan windows, that provide grants and low interest loans to very poor countries. MDBs belong to a complex set of public institutions that can be categorized as (i) global, (ii) regional and (iii) Sub- regional. Categorizations of all MDBs are done by taking into consideration their regional coverage. This facilitates the process of clearly understanding the similarities and differences among them by using common denominators rather than extensive individual assessments.

The prominent British economist John Maynard Keynes addressed economic and social needs that emerged in the post-war period. Harry Dexter White- an American economist was a key figure in envisioning the set of institutions that were to be created as envisioned by John Maynard Keynes. White, in the year 1942 paved the path towards the fundamentals of a development policy when he prepared a proposal for a United Nations Stabilization Fund and Bank for Reconstruction and Development of the United and Associated Nations, that would provide the basis for a post-war international monetary reform. The proposal called for the creation of two related institutions with the powers, resources and structure adequate to address major issues in the post-war period.

MDBs such as the World Bank and the Asian Development Bank (ADB) are publicly financed institutions that are responsible for setting the development agenda of their member countries. Almost all countries in the world with the exception of Cuba and North Korea are members of MDBs. All countries with membership in MDBs contribute to the institution since they are affiliated to and avail loans from them. MDBs emphasize that largescale development projects such as hydroelectric dams, irrigation projects, transportation development, oil and gas projects have the potential to reduce poverty and increase economic activities that would be aimed at development. However, on the contrary, there are others who oppose such development projects since they have terrible consequences to the environment and their lives, negates the Banks’ claim. Many argue that the damage done through these projects not only affect their welfare, but have negative social, economic and environmental results that are irreversible.

The Asian Development Bank is a regional multilateral finance institution that is dedicated to the realization and reduction of poverty in Asia and the Pacific. The ADB was founded in1966 and has 62 member countries and most of them belong to the region. The ADB has an equity capital of $44 billion and reserves of $7.9 billion. Since its beginning in 1966 to the year 2002 the Bank has approved loans to both the public and private sectors amounting to $98.831 billion and disburses $5 billion in loans and projects across the region and earns from it an annual return of $500 million.

The ADB’s Poverty Reduction Strategy (PRS) is the central component of its Long -Term Strategic Framework (LTSF 2001 - 2015) . This fifteen- year agenda of the ADB subscribed to the United Nations Millennium Development Goals to achieve the target of halving the number of people living in poverty worldwide. According to the Bank’s claim, its development agenda is to improve the welfare of the people living in Asia and the Pacific, more particularly about 900 million Asians who are living in poverty and earn less than a dollar a day. Among the priorities of the ADB are economic growth, human development, gender and development, good governance, environmental protection, private sector development and regional co-operation. The ADB now operates through five geographically contiguous areas which addresses country and sector themes. The groupings are (i) East and Central Asia, (iii) the Mekong, (iii) the pacific, (iv) South Asia and (v) South-East Asia. Each of the regional departments undertake country planning and programming of sub-regional and country-specific assistance. Similar to any other bank, the ADB receives resources from its shareholders. Japan and the United States have the largest shares among the 62 country members that amounts to 15.9 percent of shares.

Key takeaways of the meet/Qingdao declaration

·           It is an Eurasian political, economic, and security Organisation formed in 2001 and headquartered in Beijing.

·           It owes its origin to its predecessor Shanghai Five (a multilateral forum founded by 5 countries China, Russia, Kazakhstan, Kyrgyzstan and Tajikistan in Shanghai in 1996).

·           Its driving philosophy is known as the “Shanghai Spirit” which emphasizes harmony, working by consensus, respect for other cultures, non-interference in the internal affairs of others, and non-alignment.

·           2018 year meet is India’s first participation in the summit as a full-time member. India, along with Pakistan, became full-time members during the Astana summit in Kazakhstan in June 2017.

·           It is the extra charge being collected by OPEC countries from Asian countries when selling oil.

·           There are 3 important benchmarks in global market, representing the cost of oil produced in respective geographies.

·           However, US and Europe had an advantage because their markets and prices were based on future trading and reflected every trend in the crude market. On the other hand, Asia represented by Dubai/Oman do not have any derivative trading, doesn’t have that edge.

·           Hence, price charged from Asian countries remained $1-$2 dollar higher than that from Europe and the US. This price differential is termed as ‘Asian Premium’.

·           It is an intergovernmental organisation whose stated objective is to “co-ordinate and unify petroleum policies among Member Countries, in order to secure fair and stable prices for petroleum producers; an efficient, economic and regular supply of petroleum to consuming nations; and a fair return on capital to those investing in the industry.”

·           It is the world’s central intergovernmental forum for scientific and technical cooperation in the nuclear field.

·           It is an autonomous international Organisation within the United Nations system set up in July 1957 through its own international treaty, the IAEA Statute.

·           The IAEA reports to both the United Nations General Assembly and Security Council.

·           It works for the safe, secure and peaceful uses of nuclear science and technology.

·           Contributing to international peace and security and the United Nations’ Sustainable Development Goals.

·           The objective of IAEA Safeguards is to deter the spread of nuclear weapons by the early detection of the misuse of nuclear material or technology.

·           In 2009, an Agreement between the Government of India and the IAEA for the Application of Safeguards to Civilian Nuclear Facilities was signed. Then in 2014, India ratified an Additional Protocol (as part of its commitments under US-India Nuclear Deal) to its safeguards agreements with the International Atomic Energy Agency (IAEA).

·           The AP is an important tool of the IAEA, over and above the provisions of the safeguard agreement, to verify the exclusively peaceful nature of a country’s nuclear programme.

·           BIMSTEC is a regional Organisation comprising seven Member States lying in the littoral and adjacent areas of the Bay of Bengal including Bangladesh, Bhutan, India, Nepal, Sri Lanka, Myanmar and Thailand.

·           South South Cooperation (SSC) is defined as the exchange and sharing of developmental solutions among countries in the global south.

·           It was formally established by the Brasilia Declaration of 6 June 2003 by external affairs ministers of India, Brazil and South Africa.

·           It was set up with the objective of facilitating the execution of human development projects to advance the fight against poverty and hunger in developing countries.

·           The IBSA Fund is managed by the United Nations Office for South-South Cooperation (UNOSSC).

The North Atlantic Treaty Organisation was created in 1949 by the United States, Canada, and several Western European nations to provide collective security against the Soviet Union. 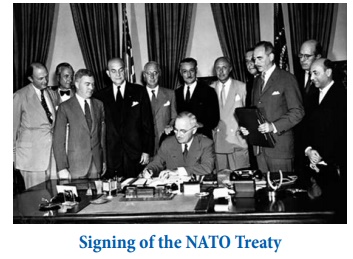 NATO was the first peacetime military alliance the United States entered into outside of the Western Hemisphere. The nations of Western Europe wanted assurances that the United States would intervene automatically in the event of an attack. As a result of tensive negotiations the North Atlantic Treaty was signed in 1949. In this agreement, the United States, Canada, Belgium, Denmark, France, Iceland, Italy, Luxemburg, the Netherlands, Norway, Portugal, and the United Kingdom agreed to consider attack against one an attack against all, along with consultations about threats and defense matters. The collective defense arrangements in NATO served to place the whole of Western Europe under the American “nuclear umbrella.” Although formed in response to the exigencies of the developing Cold War, NATO has lasted beyond the end of that conflict, with membership even expanding to include some former Soviet states. It remains the largest peacetime military alliance in the world.

It is an agreement between the UN chief, 36 Organisational entities, the International Criminal Police Organisation (INTERPOL) and the World Customs Organisation, to better serve the needs of Member States when it comes to tackling international terrorism.

·           TO ensure that the United Nations system provides coordinated capacity-building support to Member States, at their request, in implementing the UN Global Counter-Terrorism Strategy and other relevant resolutions.

·           TO foster close collaboration between the Security Council mandated bodies and the rest of the United Nations system.

·           The UN Global Counter-Terrorism Compact Coordination Committee will oversee and monitor the implementation of the Compact which will be chaired by UN Under-Secretary-General for counterterrorism.

·           It will replace the Counter-Terrorism Implementation Task Force, which was established in 2005.

·           It is a multilateral treaty banning all nuclear explosions for both military and civilian purposes.

·           It was negotiated at the Conference on Disarmament in Geneva and adopted by the United Nations General Assembly. It was opened for signature on 24 September 1996.

·           The CTBT with its 183 signatories and 163 ratifications is one of the most widely supported arms-control treaties. It can only enter into force after it is ratified by eight countries with nuclear technology capacity, namely China, Egypt, India, Iran, Israel, North Korea, Pakistan and the United States.

·           The Treaty establishes a CTBT Organisation (CTBTO), located in Vienna, to ensure the implementation of its provisions, including provisions for international verification measures.

·           India did not support the Comprehensive Nuclear Test Ban Treaty in 1996 and still does not due to following reasons: CTBT does not address complete disarmament (supported by India), discriminatory in nature with permanent UNSC members.

·           Another major concern was the Entry-Into Force (EIF) clause, which India considered a violation of its right to voluntarily withhold participation in an international treaty. The treaty initially made ratification by states that were to be a part of the CTBT’s International Monitoring System (IMS) mandatory for the treaty’s EIF. Because of this, India withdrew its participation from the IMS

Treaty on the Non-Proliferation of Nuclear Weapons (NPT) 1968

·           Its objective is to prevent the spread of nuclear weapons and weapons technology, to promote cooperation in the peaceful uses of nuclear energy and to further the goal of achieving nuclear disarmament and general and complete disarmament.