An architectural view is a way to portray those aspects or elements of the architecture that are relevant to the concerns the view intends to addressŌĆöand, by implication, the stakeholders for whom those concerns are important.

An architectural view is a way to portray those aspects or elements of the architecture that are relevant to the concerns the view intends to addressŌĆöand, by implication, the stakeholders for whom those concerns are important. This idea is not new, going back at least as far as the work of David Parnas in the 1970s and more recently Dewayne Perry and Alexander Wolf in the early 1990s.

However, it wasnŌĆÖt until 1995 that Phillipe Kruchten of the Rational Corporation published his widely accepted written description of viewpoints, Architectural BlueprintsŌĆöThe 4+1 View Model of Software Architecture. This suggested four different views of a system and the use of a set of scenarios (use cases) to check their correctness. KruchtenŌĆÖs approach has since evolved to form an important part of the Rational Unified Process (RUP).

More recently, IEEE Standard 1471 has formalized these concepts and brought some welcome standardization of terminology. In fact, our definition of a view is based on and extends the one from the IEEE standard.

When deciding what to include in a view, ask yourself the following questions. What class(es) of stakeholder is the view aimed at? A view may be narrowly focused on one class of stakeholder or even a specific individual, or it may be aimed at a larger group whose members have varying interests and levels of expertise. How much technical understanding do these stakeholders have? Acquirers and users, for example, will be experts in their subject areas but are unlikely to know much about hardware or software, while the converse may apply to developers or support staff. What stakeholder concerns is the view intended to address? How much do the stakeholders know about the architectural context and background to these concerns? How much do these stakeholders need to know about this aspect of the architecture? For non technical stakeholders such as users, how competent are they in understanding its technical details? As with the AD itself, one of your main challenges is to get the right level of detail into your views. Provide too much detail, and your audience will be overwhelmed; too little, and you risk your audience making assumptions that may not be valid.

Strategy: Include in a view only the details that further the objectives of your ADŌĆöthat is, those details that help explain the architecture to stakeholders or demonstrate that stakeholder concerns are being met.

It would be hard work if every time you were creating a view of your architecture you had to go back to first principles to define what should go into it. Fortunately, you donŌĆÖt quite have to do that.

In his introductory paper, Kruchten defined four standard views, namely, Logical, Process, Physical, and Development. The IEEE standard makes this idea generic (and does not specify one set of views or another) by proposing the concept of a viewpoint. The objective of the viewpoint concept is an ambitious oneŌĆöno less than making available a library of templates and patterns that can be used off the shelf to guide the creation of an architectural view that can be inserted into an AD. We define a viewpoint (again after IEEE Standard 1471) as follows.

Definition: A viewpoint is a collection of patterns, templates, and conventions for constructing one type of view. It defines the stakeholders whose concerns are reflected in the viewpoint and the guidelines, principles, and template models for constructing its views.

Architectural viewpoints provide a framework for capturing reusable architectural knowledge that can be used to guide the creation of a particular type of (partial) AD. In a relatively unstructured activity like architecture definition, the idea of the viewpoint is very appealing. If we can define a standard approach, a standard language, and even a standard metamodel for describing different aspects of a system, stakeholders can understand any AD that conforms to these standards once familiar with them. In practice, of course, we havenŌĆÖt achieved this goal yet. There are no universally accepted ways to model software architectures, and every AD uses its own conventions. However, the widespread acceptance of techniques such as entity-relationship models and of modeling languages such as UML takes us some way toward this goal. In any case, it is extremely useful to be able to categorize views according to the types of concerns and architectural elements they present.

Strategy: When developing a view, whether or not you use a formally defined viewpoint, be clear in your own mind what sorts of concerns the view is addressing, what types of architectural elements it presents, and who the viewpoint is aimed at. Make sure that your stakeholders understand these as well.

Interrelationships Between the Core Concepts 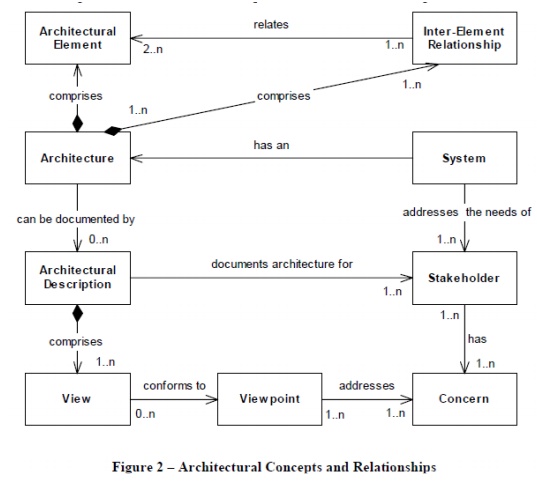 . ŌĆó A system is built to address the needs, concerns, goals and objectives of its stakeholders.

ŌĆó  The architecture of a system is characterized by its static and dynamic structures, and its externally-visible behavior and properties.

ŌĆó  The architecture of a system is comprised of a number of architectural elements and their interrelationships.

ŌĆó  The architecture of a system can potentially be documented by an architectural description (fully, partly or not at all). In fact, there are many potential ADs for a given architecture, some good, some bad.

ŌĆó  An architectural description documents an architecture for its stakeholders, and demonstrates to them that it has met their needs.

ŌĆó  A viewpoint defines the aims, intended audience, and content of a class of views and defines the concerns that views of this class will address.

ŌĆó  An architectural description comprises a number of views. The Benefits of Using Viewpoints and Views

The Benefits of Using Viewpoints and Views

ŌĆó  Separation of concerns: Describing many aspects of the system via a single representation can cloud communication and, more seriously, can result in independent aspects of the system becoming intertwined in the model. Separating different models of a system into distinct (but related) descriptions helps the design, analysis, and communication processes by allowing you to focus on each aspect separately.

ŌĆó  Management of complexity: Dealing simultaneously with all of the aspects of a large system can result in overwhelming complexity that no one person can possibly handle. By treating each significant aspect of a system separately, the architect can focus on each in turn and so help conquer the complexity resulting from their combination.