Arabidopsis and other model plants - Physiology and regulation

Model organisms are used because they are comparatively easy to study and sufficiently similar to other related organisms that findings can be broadly applied. Arabidopsis thaliana is an important model plant; others include Antirrhinum, maize and rice.

ARABIDOPSIS AND OTHER MODEL PLANTS

Model organisms are used because they are comparatively easy to study and sufficiently similar to other related organisms that findings can be broadly applied. Arabidopsis thaliana is an important model plant; others include Antirrhinum, maize and rice.

Arabidopsis thaliana (arabidopsis) is a member of the cabbage family. It has become a preferred ‘model organism’ for the study of plants due to its small genome size, short life cycle, small size, prolific production of small seeds and ease of mutagenesis and transformation.

The entire arabidopsis genome has now been sequenced, and other projects are in progress to obtain the DNA sequence of several other model plants (maize, rice) and to identify every gene within them, together with understanding the regulation and function of the genes.

A model organism is one studied by many scientists because it has characteristics which make it easy to study and because it is sufficiently similar to other organisms that conclusions from it can be widely applied. The insect Drosophilamelanogaster, for instance, has been studied by many laboratories world-wide because of its simple genetics and short life-cycle. The fact that many laboratories study the same organism has other advantages; knowledge can be shared, findings confirmed and progress is consequently more rapid. Several plants have been intensively studied and become models, the most important recently being Arabidopsis thaliana (see below). Corn (maize) and rice have also been studied widely as important crop species, and Antirrhinum majus has become a

model for flowering. The mosses Funaria hygrometrica and Physcomitrella patens have also been used as models, as has the marine alga Fucus serratus.Subsequent topics (Topics E2 to J5, N3 to N5 and O1 to O3) illustrate findingsfrom the use of model plants.

Arabidopsis thaliana (Fig. 1), now often called arabidopsis by plant biologists, is a small and rather insignificant agricultural weed. It is a member of the cabbage family (Brassicaceae). It has a number of key features that make it suitable as a model organism for the study of plants: 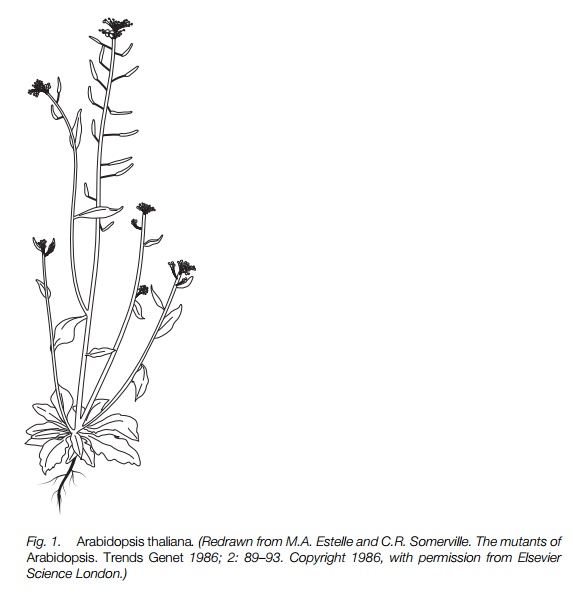 ●Small seed, 20 g each, 20 000 per plant. Seed can be easily stored and large numbers of plants can be generated.

●Easy to induce mutations (mutagenize) by chemicals or radiation.

●Easy to carry out techniques of molecular biology (Topics E2 and O3).

Each protein made by a cell is encoded by a section of the DNA of that cell, termed a gene. Various projects aim to obtain the entire DNA sequence of several model organisms and to identify every gene within that organism. For

this information to be useful, it is important that the regulation and function of each gene is understood. The major plant genome sequencing project is the Arabidopsis Genome Project (AGP), which was completed in December 2000. Other plant species for which genome sequences are being obtained include corn (maize) and rice.