These determinants are present on all molecules of each class and subclass of im-munoglobulin heavy chains and on each type of light chains; they are defined serologically by antisera directed against the constant regions of H and L chains.

These determinants are present on all molecules of each class and subclass of im-munoglobulin heavy chains and on each type of light chains; they are defined serologically by antisera directed against the constant regions of H and L chains. The antisera are pro-duced in animals, which, upon injection of purified human immunoglobulins, recognize the structural differences between constant regions of H and L chains. Isotypic determinants are common to all members of a given species, hence they cannot be used as genetic mark-ers. Their practical importance results from the fact that they allow the identification of classes and subclasses of immunoglobulins through the heavy-chain isotypes and types of light chains (k , λ ). All classes and subclasses of normal immunoglobulins share the two light-chain isotypes.

The antigen-combining site in the V region of the immunoglobulin molecule, in addition to determining specificity for antigen binding, can also act as an antigen and induce produc-tion of antibodies against it. Such antigenic determinants, usually associated with hyper-variable regions, are known as idiotypes.

These are hereditary antigenic determinants of Ig polypeptide chains that may differ be-tween individuals of the same species. The loci controlling allotypic determinants are codominant (i.e., both are expressed phenotypically in a heterozygote) autosomal genes that follow Mendelian laws of heredity. All allotypic markers that have so far been identi-fied on human immunoglobulin molecules, with one exception (see later), are present in the C regions of H chains of IgG, IgA, IgE, and on k-type L chains. Since different individu-als of the same species may have different allotypes, these determinants can be used as ge-netic markers.

The most common technique used for allotype determination is hemagglutination-in-hibition. For this purpose, ORh+ red cells are coated with IgG immunoglobulins of known allotypes. The coated cells will agglutinate when exposed to specific antibody. The agglu-tination, however, will be inhibited if the antiserum recognizing the allotype of the im-munoglobulin coating the red cell is preincubated with soluble IgG carrying the same allo-type. Thus, in a first step, the anti-allotypic antiserum and an unknown serum to be typed are mixed. In a second step, red cells coated with the relevant allotype are added to dilu-tions of the mixture. If agglutination is inhibited, it can be concluded that the allotype was present in the unknown serum.

Allotypes have been found on γ1, γ2, and γ3 heavy chains but not as yet on γ4 chains. They are denoted as G1M, G2M, and G3M, respectively (G for IgG, the numerals 1, 2, and 3 identify the subclass, the letter M for marker). At present, 18 GM specificities can be de-fined (Table 7.1): 4 associated with IgG1 (G1M), 1 associated with IgG2 (G2M), and 13 associated with IgG3 (G3M). G1M 3 and G1M 17 are localized in the Fd portion of the IgG molecule, while the rest are in the Fc portion. In some cases it has been shown that the anti-genic differences recognized as allotypic are a consequence of single amino acid substitu-tion on the heavy chains. For instance, G1M 3 heavy chains have arginine at position 214 and G1M 17 heavy chains have lysine at this position. A single heavy chain may possess more than one GM determinant; G1M 17 and G1M 1 are frequently present on the Fd and Fc portions of the same H chain in Caucasians. 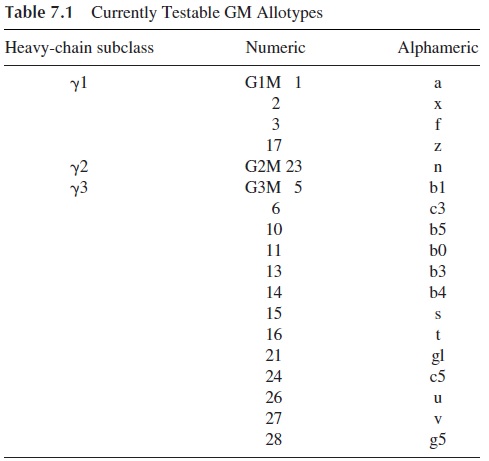 The four C-region genes on human chromosome 14 that encode the four IgG sub-classes are very closely linked. Because of this close linkage, GM allotypes of various sub-classes are transmitted as a group called a haplotype. Also, because of almost absolute link-age disequilibrium between the alleles of various IgG C-region genes, certain allotypes of one subclass are always associated with certain others of another subclass. For example, the IgG1 gene controls G1M 3, whereas the IgG3 gene controls G3M 5 and G3M 21. We should expect to find G1M 3 associated with G3M 5 as often as with G3M 21; in fact, in Caucasians, a haplotype carrying G1M 3 is almost always associated with G3M 5 and not with G3M 21. Every major ethnic group has a distinct array of GM haplotypes. GM* 3 23 5,10,11,13,14,26 and GM* 1,17 5,10,11,13,14,17,26 are examples of common Caucasian and Negroid haplotypes, respectively. In accordance with the international system for hu-man gene nomenclature, haplotypes and phenotypes are written by grouping together the markers that belong to each subclass, by the numerical order of the marker and of the sub-class; markers belonging to different subclasses are separated by a space, while allotypes within a subclass are separated by commas. An asterisk is used to distinguish alleles and haplotypes from phenotypes.

Two allotypes have been defined on human IgA2 molecules: A2M 1 and A2M 2. They be-have as alleles of one another. No allotypes have been found on IgA1 molecules as yet. In-dividuals lacking IgA (or a particular IgA allotype) have in some instances been found to possess anti-IgA antibodies directed either against one of the allotypic markers or against the isotypic determinant. In some patients these antibodies can cause severe anaphylactic reactions following blood transfusion containing incompatible IgA.

Only one allotype, designated as EM 1, has been described for the IgE molecule. Because of a very low concentration of IgE in the serum, EM 1 cannot be measured by hemaggluti-nation-inhibition, the method most commonly used for typing all other allotypes. This marker is measured by radioimmunoassay using a monoclonal anti-EM 1 antibody.