The Development of Effective Drug Treatment for Convulsive Disorders

Epilepsy (or epilepsies, since markedly different clinical entities exist) is a common neurological abnor-mality affecting about 1% of the human population. Epilepsy is a chronic, usually life-long disorder charac-terized by recurrent seizures or convulsions and usually, episodes of unconsciousness and/or amnesia. Table 32.1 illustrates the major types of epileptic seizures. Patients often exhibit more than one type. In most instances, the cause of the seizure disorder is not known (idiopathic epilepsy), although trauma during birth is suspected of being one cause. 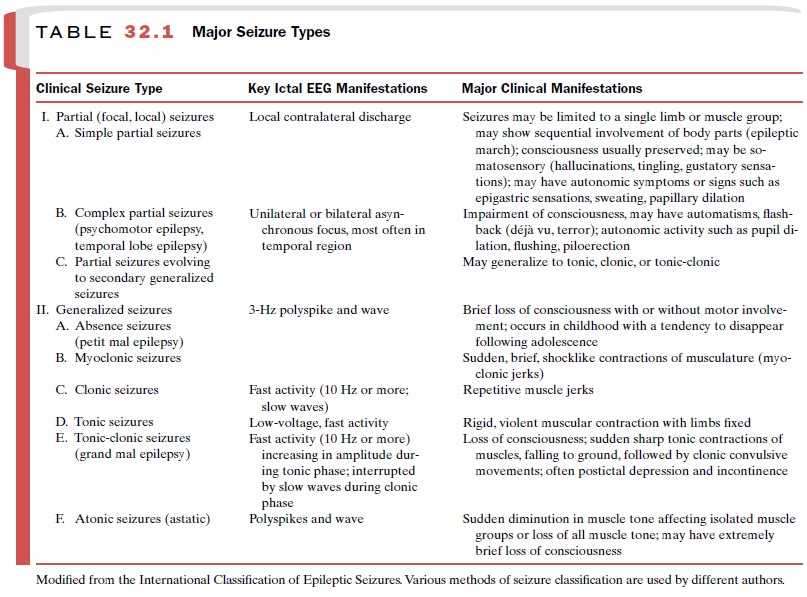 Head trauma, meningitis, childhood fevers, brain tumors, and degenerative diseases of the cerebral circulation are conditions often associated with the appearance of recurrent seizures that may require treatment with anticonvulsant drugs. Seizures also may be a toxic manifestation of the action of central nervous system (CNS) stimulants and certain other drugs. Seizures often occur in hyperthermia (febrile seizures are very common in infants); sometimes in eclampsia, uremia, hypoglycemia, or pyridoxine defi-ciency; and frequently as a part of the abstinence syndrome of individuals physically dependent on CNS depressants.

The therapeutic goal in epilepsy treatment is com-plete seizure control without excessive side effects. The prognosis depends in part upon the type of seizure disor-der, but overall, only about 40 to 60% of patients become totally seizure free with available drugs. These agents are chemically and pharmacologically diverse, having in common only their ability to inhibit seizure activity with-out impairing consciousness. The choice of drug or drugs used depends on seizure classification, since a particular drug may be more or less specific for a particular type of seizure; patients having a mixture of seizure types pres-ent particular therapeutic difficulties. It is not always clear when to treat with one drug (monotherapy) or more than one drug (polytherapy) in a particular patient. Approximately 25% of patients given a single anticon-vulsive agent do not achieve successful seizure control because of an unacceptable level of side effects. Therefore, two or more drugs may be combined in an at-tempt to provide better seizure control.

Convulsive disorders often begin in childhood, and drug therapy must be continued for decades; therefore, any adverse reaction is especially significant. A knowl-edge of interactions between anticonvulsants and other drugs is necessary, since the patient usually must con-tinue anticonvulsant medication regardless of the need for other drugs. Since it may be dangerous to withdraw anticonvulsant medication from a pregnant woman with epilepsy, the teratogenic potential of anticonvulsant drugs also is a consideration in the treatment of women of childbearing age.

The Development of Effective Drug Treatment for Convulsive Disorders

The first effective treatment of seizure disorders was the serendipitous finding in 1857 that potassium bromide could control seizures in some patients. Even though side effects were troublesome, the bromides were widely used for many years. Phenobarbital was intro-duced as a treatment for epilepsy in 1912 and was im-mediately shown to be markedly superior to bromides. While other barbiturates were synthesized and used, none were shown to be superior to phenobarbital, and the latter compound is still used. A chemically related nonbarbiturate, phenytoin, was discovered about 20 years later and also remains a valuable drug today. Approaches being used for the identification of new an-ticonvulsant drugs include the search for agents that block specific cationic channels in neuronal membranes, agents that enhance the activity of the inhibitory neuro-transmitter γ-Aminobutyric acid (GABA), and agents that are capable of inhibiting the activity of the excita-tory neurotransmitters glutamic and aspartic acids.

In epilepsy certain neurons and/or groups of neurons become hyperexcitable and begin firing bursts of action potentials that propagate in a synchronous manner to other brain structures (and in the case of generalized seizures, to practically all areas of the brain). These may be the result of abnormalities in neuronal membrane stability or in the connections among neurons. It is known that the epileptic bursts consist of sodium-dependent action potentials and a calcium-dependent depolarizing potential.

Recent drug development studies have centered on the capacity of known antiepileptic drugs (AEDs) to in-teract with ion channels, and it is now established that several agents appear to be exerting their effects prima-rily by inhibiting ion channels. Modulation of neuronal sodium channels decreases cellular excitability and the propagation of nerve impulses. Inhibition of sodium channels appears to be a major component of the mechanism of action of several anticonvulsant drugs.

Much interest is also centered on the role of calcium channels in neuronal activity, since the depolarization associated with burst firing is mediated by the activation of calcium channels. At therapeutically relevant con-centrations, the antiabsence drug ethosuximide appears to exert its effect by inhibiting the T-type calcium chan-nels. A portion of valproic acid’s activity may also be at-tributable to this effect.

Disinhibition may play an important role in the generation of epileptic seizures, since a reduction of GABAergic inhibition is necessary to produce the synchronous burst discharges in groups of cells. Com-pounds that antagonize the activity of GABA (picro-toxinin, penicillin C, bicuculline) are CNS convulsants, while agents that facilitate GABA’s inhibition have an-ticonvulsant activity. Several anticonvulsant drugs act to facilitate the actions of GABA.

Excitatory neurotransmitters also may be involved in the appearance of epilepsy, since the bursting activity typically seen during epileptic discharges may be due in part to the action of glutamate acting on N-methyl-D-aspartate (NMDA) receptor channels to produce depo-larization. It is likely that a major part of the anticon-vulsant activity of felbamate involves blockade of the NMDA receptor. Table 32.2 summarizes the most likely mechanism of action associated with available anticon-vulsant drugs.