Of 9 maritime states of India, only 4 have been extensively covered for the study of marine actinomycetes.

Of 9 maritime states of India, only 4 have been extensively covered for the study of marine actinomycetes. Forty years of floristicinventory of marine actinomycetes in Indian Peninsula yielded 41 species belonging to 8 genera, in which the genus Streptomyces was more frequently recorded(Sivakumaret al., 2007). Majority of the surveys have been conducted in the coastal areas, collecting the littoral sediments from the states of Maharastra, Kerala, Tamil Nadu and Andhra Pradesh. Studies covering the Gujarat, Goa, Karnataka, Orissa, West Bengal and Andaman and Nicobar islands are scanty.

Ranjithkumar et al., (2014a) isolated 115 actinomycetes from were isolated from the east and west coastal regions of India. Out of 115 actinomycetes strains, 52 isolates (45.2%) had antimicrobial activity, of which 26 isolates (22.6%) showed antibacterial activity (against S.aureus), 17 isolates (14.7%) showed antifungal activity (against T. rubrum), 9 isolates (7.8%) showed both antibacterial and antifungalactivity. Of all 115 actinomycetes strains, BW2-7 showed a broad-spectrum antibiotic activity (Fig. 1) which was isolated from Kannamaly beach had broad spectral antimicrobial activity and was selected for further studies. The physiological and biochemical characteristics and the 16S rRNA sequence analysis confirmed that the strain StreptomycesspBW2-7 was identical to S. fradiae. 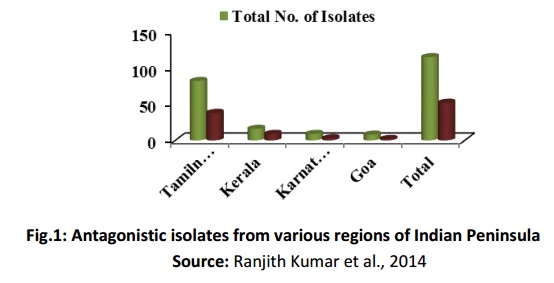 Kuster’s agar and Glucose asparagines agar. Majority of the isolates

(46.43%) showed combined antibacterial and antifungal activity and 25% showed only antibacterial activity. Balagurunathan et al. (1989) studied the antagonistic behavior of actinomycetes isolated from the littoral sediments of Parangipettai. Among the 51 strains, only 11 strains showed good antibiotic activity and they were identified as Streptomyces spp. and Nocardiaspp. This antibiotic was tested against fish pathogens viz. species of Vibrio, Aeromonas, Pseudomonas, Bacillus and

Fusariumand it inhibited all these pathogenic organisms with inhibitionzones ranging from 10-30 mm. The Vibrio sp. and Pseudomonas sp. were more sensitive than the other bacterial species tested.

Sivakumar (2001) isolated actinomycetes from the Pitchavaram mangrove environment. The 16S rRNA genes of the isolated two strains were partially sequenced were deposited in the Gen Bank, National Centre for Biotechnological Information, USA under the sequence of the accession numbers AY015427 and AY015428. Patil et al. (2001) reported 133 strains of actinomycetes from 129 marine samples collected from various stations along the Tuticorin coast. Of the 104 strains of actinomycetes screened for the inhibitory activity against bacterial pathogens associated with fish diseases (Aeromonashydrophila,Aeromonassobriaand Edwardsiellatarda), 77 isolates possessedinhibitory activity to at least one of the pathogens. Balagurunathan and Subramanian (2001) isolated 51 strains of Streptomyces from the littoral sediments of Parangipettai coastal waters. Out of these, only eight strains showed very promising antibiotic activity against bacteria and fungi. These strains exhibited higher activity against gram-positive

Sivakumar et al. (2005a) reported 91 strains of actinomycetes from different stations of the Pitchavaram mangrove ecosystem. Out of the 91 strains, only 6 strains showed good activity and they were identified upto species level. Sahu et al. (2005a) studied actinomycetes population density from different samples viz. water, sediments, seaweeds, molluscs and finfishes of the Vellar estuary. The sediment samples harboured higher population density compared to the watersamples. Biological samples viz. seaweeds, molluscs and fin fishes were also analyzed for actinomycetes population. Among them, molluscs recorded higher population density in shell surface region than the gut contents, while the fin fishes recorded higher population in gut contents followed by gills and skin. Seaweed samples also recorded considerable actinomycetes populations. Sahu et al. (2005b) studied the extra-cellular enzyme (amylase, lipase, protease, cellulase and chitinase) activities of actinomycetes isolated from the sediment and molluscan samples of the Vellar estuary. The study indicated that the actinomycetes are the potential sources for extra-cellular enzymes, which play a role in biodegradation of organic matter, thereby enhancing the productivity of the marine environment.

Umamaheswary et al. (2005) isolated 40 strains of actinomycetes from the estuarine fish, Mugilcephalususing Kuster's agar medium. Out of 40 strains tested, only the strain S. galbusshowed good L-glutaminase activity. Various process parameters which influenced L-glutaminase production by the S. galbuswere optimized. Maximal enzyme production (18.93IU/ml) was attained at pH 9.0, 360 C, and glucose and malt-extract as carbon sources after 72 h of incubation. Senthilkumar et al. (2005) isolated 41 halophilic actinomycetes strains from the salt marsh area of the Vellar estuary using four different media. SC agar medium was the best for the isolation of halophilicactinomycetes. Among the isolated strains, the strain SH-9 showed greater resistance towards mercuric chloride in agar diffusion assay. The strain was classified as Actinopolysporasp. by its morphological and chemotaxonomical characters.Sivakumar et al. (2006) isolated actinomycetes strains from skin, gills and gut contents of the estuarine fish, Chanoschanos. Out of 20 strains tested,Streptomyces rimosusshowed L-glutaminase activity. Optimum production of L-glutaminase (18.93IU/ ml) was observed after 96 h at 270 C, pH 9.0 with glucose and malt extract.

sporasalinaVITSDK4 from Bay of Bengal, which produced an extracellularbioactive metabolite, which inhibited the proliferation of HeLa cells as well as antagonistic to fungal and bacterial pathogens. Deepika and Kannabiran (2009) isolated 100 marine actinomycetes from coastal regions of Tamil Nadu. Out of 100 isolates 3 isolates belonged to genus Streptomyces sp exhibited potential antidermatophytic activity againstthe dermatophyteTrichophytonrubrum. Ramesh and Mathivanan (2009) isolated 209 marine actinomycetes from Bay of Bengal and screened for antimicrobial activity and industrial enzymes.

Ellaiah and Reddy (1987) isolated 140 strains of actinomycetes from the marine sediments of Visakhapatnam coast and identified them upto genus level. Out of these 140 strains, only 18% exhibited anti-microbial activity against bacteria and fungi. Ellaiah (1996) isolated

Andaman and Nicobar group of islands

Sahu (2007) assessed the population density of actinomycetes from eight different stations of the Little Andaman Island. Mean population density of actinomycetes recorded from the water samples varied from 0.29 to 0.45 x103 CFU/ml with the minimum of 0.29 x103 CFU/ml at Navel Area and the maximum of 0.45 x103 CFU/ml at Chandra Nallah. In the case of sediment samples, population density ranged from 1.21 to 3.29x103 CFU/g with a minimum of 1.21 x103 CFU/g at Navel Area and a maximum of 3.29 x103 CFU/g at Buttler Bay. During the investigation, a total of 41 strains were isolated and tested for their antagonistic activity against the bacteria that are highly pathogenic to shrimps such as V. alginolytics, V. harveyiand V. parahaemolyticus. More than 61% of the strains (26 strains) exhibited varying degree of antagonistic activity. Among them, 6 strains showed good activity and they were tentatively identified. The results suggested that theactinomycetes from the marine environment can be used as bio-control agents in shrimp culture systems to control diseases caused by bacterial pathogens.