a. Excretion and Secretion

b. Absorption and Assimilation 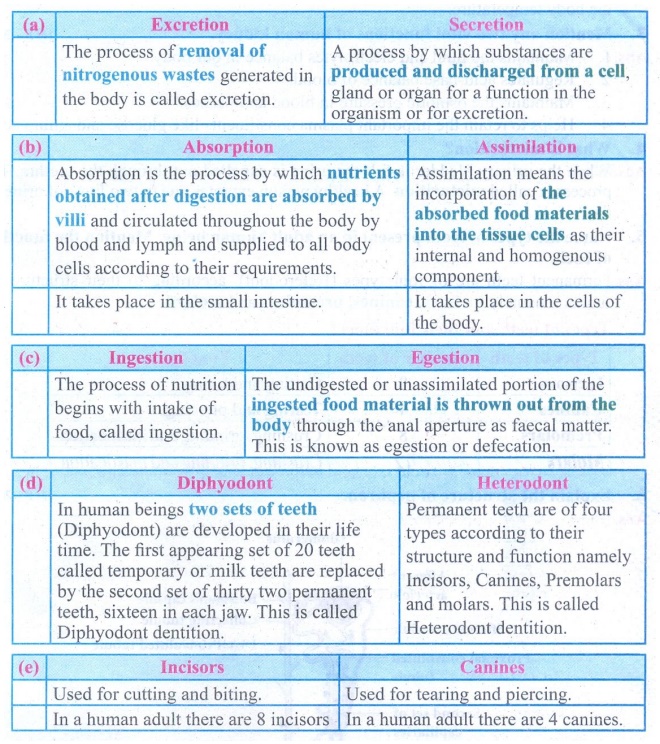 The process of removal of nitrogenous wastes generated in the body is called excretion.

A process by which substances are produced and discharged from a cell, gland or organ for a function in the organism or for excretion.

Absorption is the process by which nutrients obtained after digestion are absorbed by villi and circulated throughout the body by blood and lymph and supplied to all body cells according to their requirements.

It takes place in the small intestine.

Assimilation means the incorporation of the absorbed food materials into the tissue cells as their internal and homogenous component.

It takes place in the cells of the body.

The process of nutrition begins with intake of food, called ingestion.

In human beings two sets of teeth (Diphyodont) are developed in their life time. The first appearing set of 20 teeth called temporary or milk teeth are replaced by the second set of thirty two permanent teeth, sixteen in each jaw. This is called Diphyodont dentition.

Permanent teeth are of four types according to their structure and function namely Incisors, Canines, Premolars and molars. This is called Heterodont dentition.

Used for cutting and biting.

In a human adult there are 8 incisors.

Used for tearing and piercing.

In a human adult there are 4 canines.

1. How is the small intestine designed to absorb digested food?

Answer: Heum is the longest part of the small intestine. It contains minute finger like projections called villi (one millimeter in length) where absorption of food takes place. They are approximately 4 million in number. Internally, each villus contains fine blood capillaries and lacteal tubes. The small intestine serves both for digestion and absorption.

Answer: The human body functions normally at a temperature of about 37°C. When it gets hot sweat glands start secreting sweat, which contains water with small amounts of other chemicals like ammonia, urea, lactic acid and salts (mainly sodium chloride). The sweat passes through the pores in the skin and gets evaporated, which reduces the body temperature.

1. Maintains the fluid and electrolytes balance in our body.

3. Maintains the osmotic pressure in blood and tissues.

4. Helps to retain the important plasma constituents like glucose and amino acids.

Answer: When the urinary bladder is full the urine is expelled out through the urethra. This process is called micturition. A healthy person excretes one to two litres of urine per day.

5. Name the types of teeth present in an adult human being. Mention the functions of each.

Answer: Permanent teeth are of four types (Heterodont), according to their structure and function namely incisors, canines, premolars and molars.

Tpes of teeth and their functions:

6. Explain the structure of nephron. 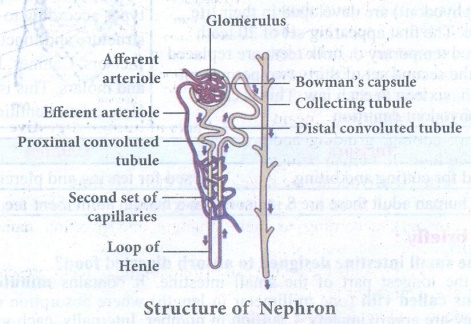 (i) Each kidney consists of more than one million nephrons. Nephrons or uriniferous tubules are structural and functional units of the kidneys.

(ii) Each nephron consists of Renal corpuscle or Malphlgian corpuscle and renal tubule.

(vi) The distal convoluted tubule which opens into the collecting tubule. The nitrogenous wastes are drained into renal pelvis of kidney which leads to ureters and stored in the urinary bladder.

(viii) Urine is expelled out through the urethra.

1. Describe the alimentary canal of man. 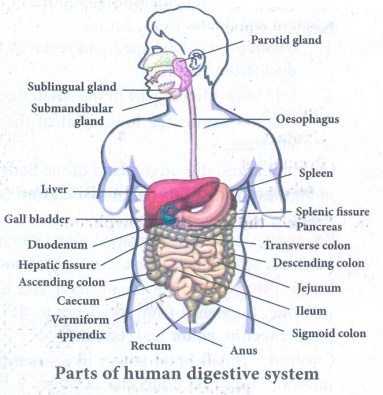 Mouth: Leads into the buccal cavity. It is bound 2 soft movable upper and lower lips. The buccal cavity is a large space bound above by the palate (which separates the wind pipe and food tube), below by the throat and on the sides by the jaws. The jaws bear teeth.

Teeth: Hard structures meant for holding, cutting, grinding and crushing the food. In human beings two sets of teeth (Diphyodont) are developed in their life time. Each tooth has a root fitted in the gum (Theocodont). Permanent teeth are of four types (Heterodont), according to their structure and function namely incisors, canines, premolars and molars.

Dental formula represents the number of different type of teeth present in each half of a jaw (upper and lower jaw).

For Permanent teeth in each half of upper and lower jaw:

Salivary glands: There are 3 pairs :

(i) Parotid glands Largest salivary glands, which lie in the cheeks in front of the ears.

(ii) Sublingual glands Smallest lands and lie beneath the tongue.

(iii) Submaxillary or Submandibular-glands-lie at the angles of the lower jaw.

Tongue: Muscular, sensory organ - Helps in mixing the food with the saliva.

Pharynx: It is a membrane lined cavity behind the nose and mouth, connecting them to the oesophagus. Serves as a pathway for the movement of food from mouth to oesophagus.

Oesophagus: Muscular-membranous canal about 22 cm in length. It conducts food from pharynx to the stomach by peristalsis (wave-like movement) produced by the rhythmic contraction and relaxation of the muscular walls of alimentary canal.

Location: Between oesophagus and the small intestine.

Small intestine: The small intestine is the longest part of the alimentary canal, which is a long coiled tube measuring about 5 - 7 m. It comprises three parts- duodenum, jejunum and ileum.

1. Duodenum - C-shaped and receives the bile duct (from liver) and pancreatic duct (from Pancreas).

3. Ileum - Forms the lower part of the small intestine and opens into the large intestine.

Liver: Largest digestive gland of the body, reddish brown in colour. Bile salts help in the digestion of fats by emulsification (conversion of large fat droplets into small ones).

Pancreas: Lobed, leaf shaped gland situated between the stomach and duodenum. Pancreas acts both as an exocrine gland and as an endocrine gland.

Large intestine: The unabsorbed and undigested food is passed into the large intestine. It extends from the ileum to the anus. About 1.5 meters in length. Has 3 parts-caecum, colon and rectum.

Caecum: Small blind pouch like structure at the junction of the small and large intestine. From its blind end, a finger - like structure called vermiform appendix arises. It is a vestigial (functionless) organ in human beings.

Colon: Much broader than ileum. Passes up the abdomen on the right ascending colon, crosses to the left just below the stomach (transverse colon) and down on the left side (descending colon).

2. Explain the structure of kidney and the steps involved in the formation of urine.

(i) Kidneys are bean-shaped reddish brown in colour.

(ii) The kidneys lie on either side of the vertebral column in the abdominal cavity attached to the dorsal body wall.

(iii) The right kidney is placed lower than the left kidney as the liver takes up much space, on the right side. 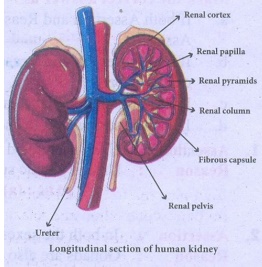 (v) Internally the kidney consists of:

(a) An outer dark region the cortex.

(b) Inner lighter region the medulla.

Both of these regions contain uriniferous tubules or nephrons.

(vi) The medulla consists of multitubular conical masses called the medullary pyramids or renal pyramids whose bases are adjacent to cortex.

(vii) On the inner concave side of each kidney, a notch called hilum is present through which blood vessels and nerves enter in and the urine leaves through the Ureter.

There are three stages.

Tubular reabsorption: The filtrate in the proximal tubule consists of essential substances such as glucose, amino acids, vitamins, sodium, potassium, bicarbonates and water that are reabsorbed into the blood by a process of selective reabsorption.

Tubular secretion: Substances such as H+ or K+ ions are secreted into the tubule. This tubular filtrate is finally known as urine, which is hypertonic in man. Finally the urine passes into collecting ducts to the pelvis and through the ureter into the urinary bladder. When the urinary bladder is full the urine is expelled out through the urethra. This process is called micturition. The healthy person excretes 1-2 litres of urine/day.

Mark the correct answer as:

a. If both Assertion and Reason are true and Reason is the correct explanation of Assertion.

b. If both Assertion and Reason are true but Reason is not the correct explanation of Assertion.

c. If Assertion is true but Reason is false.

d. If both Assertion and Reason are false.

1. Assertion: Urea is excreted out through the kidneys.

Reason: Urea is a toxic substance.

[Answer:(a) Both Assertion and Reason are true and Reason is the correct explanation of Assertion)

2. Assertion: In both the sexes gonads perform dual function.

(Ans: (a) Both Assertion and Reason are true and Reason is the correct explanation of Assertion]

1. If pepsin is lacking in gastric juice, then which event in the stomach will be affected?

a. digestion of starch into sugars.

b. breaking of proteins into peptides.

d. breaking of fats into glycerol and fatty acids.

Answer: b. breaking of proteins into peptides

3. Why do you think that urine analysis is an important part of medical diagnosis?

Analysis of urine helps to detect

Similarly in case of back pain, blood in the urine or painful urination also, required the urine analysis. Thus urine analysis is an important part of medical diagnosis.

4. Why your doctor advises you to drink plenty of water?

1. Maintain the balance of fluids and electrolytes in the body.

2. When muscle cells don't get enough water it results in muscle fatigue.

5. Can you guess why there are sweat glands on the palm of our hands and the soles of our feet?

Answer: Sweating on the palm of our hands and soles of our feet is more related to mental and emotional status of an individual and not by heat. This also acts to prevent slippage while performing delicate tasks using fingers.

X. Match the parts of the given figure with the correct option: 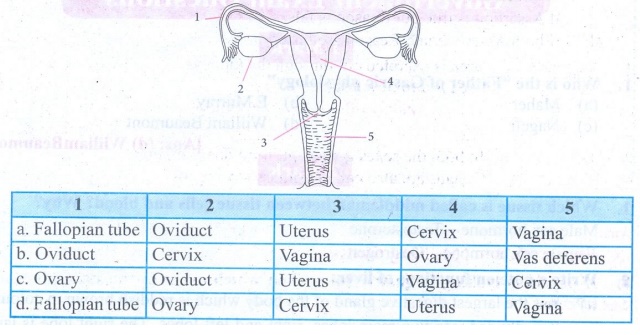 Look at the pictures given below and answer the questions that follow.

1. Are the teeth of animals similar to ours?

2. How is the shape of their teeth related to their food habit?

Answer: There are many differences between human teeth and animal teeth.

(i) Humans have at most 32 teeth, but many animals have more than we do.

Lion Teeth: They are

Carnivore Teeth: Teeth are very sharp and scissor - like. Their front teeth are used to bite and hold onto prey while their long canine teeth are used for tearing flesh and meat. Their molars are also sharp - and used for slicing rather than chewing because they mainly swallow their food in whole chunks.

Bison or buffalo teeth: They are

Herbivore teeth: An herbivore is an animal that gets energy from eating plants. Herbivors have more molars than we do. They use these flat teeth for grinding branches, grasses and seeds. Since their food doesn't try to escape, they use their front teeth like pruning shears to clip leaves and stems.