Chapter: 9th English : UNIT 4 : Supplementary : The Cat and the Painkiller - by Mark Twain

English : Supplementary : The Cat and the Painkiller - by Mark Twain - (An Extract from The Adventures of Tom Sawyer)

A. Choose the most suitable option.

a. he didn’t sleep well.

b. his scores were low at school.

c. his friend Becky Thatcher had stopped coming to school.

d. he had picked up a fight with Becky Thatcher.

a. take care of his health.

b. mend the crack on the sitting room floor.

a. he had a teaspoon of the pain-killer.

b. his tail was caught in the mouse trap.

c. Tom threw him out of the window.

d. Aunt gave him a push.

a. need not take any more medicine.

b. has to go to school regularly.

c. should not meet any of his friends.

d. must take medicines every day.

B. Identify the character or speaker of the following lines.

2. She stood petrified with astonishment peering over her glasses. Answer: Aunt Polly

4. ‘What has that got to do that with it?’ Answer: Aunt Polly

C. Based on your reading, rearrange the following sentences in the correct sequence.

1. Since all her methods failed, finally she gave him a pain-killer.

2. He told his aunt that Peter had no aunt, so he gave him the medicine.

4. It jumped out of the open window.

5. Tom was dull and depressed.

6. This incident upset Aunt Polly and she questioned him.

7. But, Tom gave that painkiller to the cat Peter.

8. So, Aunt Polly tried different types of remedies on him.

So, Aunt Polly tried different types of remedies on him.

Tom was dull and depressed.

This incident upset Aunt Polly and she questioned him.

Since all her methods failed, finally she gave him a pain-killer.

But, Tom gave that pain-killer to the cat Peter.

It jumped out of the open window.

He told his aunt that Peter had no aunt, so he gave him the medicine.

D. Based on your understanding of the story, write the answers for the following questions in a sentence or two.

1. Why did Tom lose the charm of his life?

Tom lost the charm of his'life because there was nothing but boredom left.

2. Why did Aunt Polly try different remedies on Tom?

Aunt Polly was an incurable experimenter in these things. So she began to try all manners of remedies on Tom.

3. How did the medicine diminish?

The boy was mending the health of a crack in the sitting room floor with the medicine. So the medicine diminished.

4. Did Tom compel Peter to have the painkiller?

No, Tom did not compel Peter to have the pain killer.

5. Why did Peter wish to taste the painkiller?

Peter was greedy. So he wished to taste the pain-killer.

6. How did Aunt Polly discover the reason for Peter’s absurd behaviour?

Aunt Poliy bend down and took the teaspoon and held it out. Thus she discovered the reason for Peter's absurd behaviour.

7. What was the reason given by Tom for giving the painkiller to the cat?

Tom told Aunt Polly that he gave the painkiller to the cat out of pity as he hadn't any aunt.

8. Why did Aunt Polly’s eyes water?

Aunt Polly felt that she had done cruelty to the boy. She began to soften and felt sorry, so her eyes watered.

E. Answer the following questions in about 80–100 words.

1. Describe the different types of remedies tried by Aunt Polly on Tom.

Aunt Polly was infatuated with patent medicines and all new healing methods. She was an incurable experimenter. She tried all manners of remedies on Tom. The water treatment was new. Tom's low condition was a windfall to her. She kept him out at day light, drowned him in cold water and then rubbed him hard with a file like towel. He was put under blankets. He became upset. She gave hot baths, sitz baths, shower baths and plunges; He remained bored. She added water with a slim oatmeal diet and blister - plasters. To his capacity, she filled him with quack cure-alls. He became fed up. He thought over various plans of relief. He preferred pain killer. He asked for it. It was a nuisance to aunt Polly. But finally she told him to help himself and quit bothering her.

"Too much of anything is good for nothing"

2. Narrate the funny sequence between Tom Sawyer and Peter, the cat.

One day Tom was dosing the crack to heal it. Aunt's cat Peter noticed it and begged Tom for it. Tom gave it to Peter on his risk. When Tom poured it in his mouth, he sprang in the air and then delivered a war-whoop. He went round and round the room banging against furniture, upsetting flower pots and making general confusion. Next he danced on his hind feet in a frenzy excitement. He held his head over his shoulder and voice proclaiming his happiness. He went tearing around the house again spreading chaos. Aunt entered and saw him throw somersaults with mighty hurrah. He sailed through the window carrying the other flower pots with him. The old lady stood petrified with astonishment. Tom lay on the floor expiring with laughter.

F. Complete the summary of the extract using the appropriate words from the box below.

Tom Sawyer felt dejected as Becky Thatcher had stopped coming to school. His Aunt Polly was very concerned about his health condition. So, she began to try various remedies on him. Tom became fed up with his Aunt’s brand of remedies and pretended to like the pain-killer. He started to ask for it very often. But, Tom used the medicine to mend the crack on the floor. One day, Tom gave the pain-killer to his Aunt’s cat, peter. The painkiller had an adverse effect on the cat and it started to jump around the room. Aunt Polly entered the room in time to see the cat throw a few summersets and sail through the open window. She found the teaspoon with a little pain-killer sticking to it and knew that Tom had treated the cat with it. She realised that, what was cruelty to the cat should be the same to the boy too and Stopped giving medicines to him.

G. In the story we find a lot of American slang usage of English. Complete the tabular column with standard English. One has been done for you.

H. Complete the mind map based on the inputs from the extract. 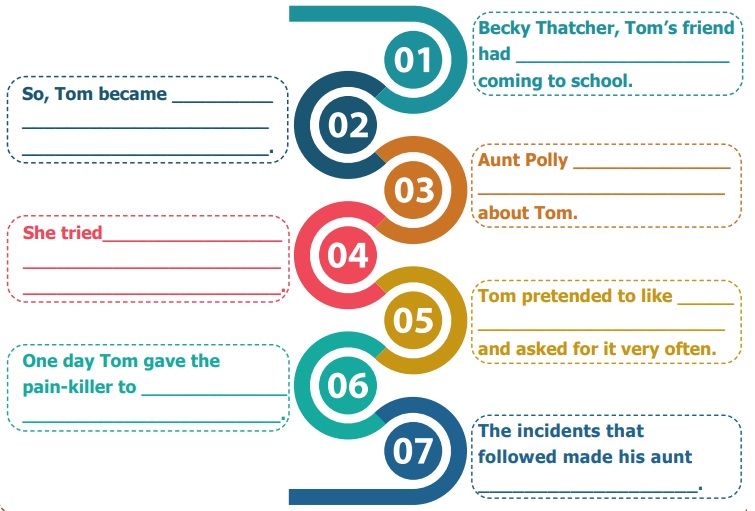 4. all manners of remedies on Tom.