* To learn about the greatness of the towns of ancient Tamilagam.

* To know about Poompuhar, Madurai and Kanchi.

* To understand the ancient kingdoms of Tamilagam. 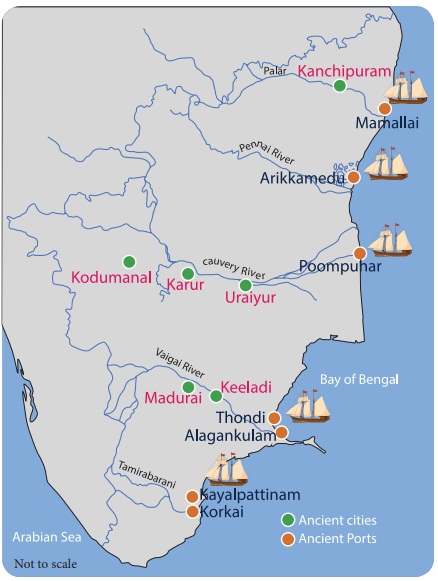 [It is a Government Higher Secondary School. Reciprocating the greetings of the students of VI Std, the Social Science Teacher signals them to get seated]

Teacher: Wow! You look pretty in your new dress, Tamilini.

Students: Ma’m, today is her birthday.

Teacher: Wish you a happy birthday Tamilini. Many more happy returns of the day.

Students: How come ma’m? What is the connection between Tamilini’s birthday and today’s class?

Teacher: There is. I shall come to that later. Let us stand up and wish her first.

Tamilini: No ma’m. My home town is Kadavur near Karur.

Teacher: Good. Do you have the habit of visiting your home town?

Tamilini: Yes ma’m. Every summer I visit my home town.

Teacher: Excellent! Can you tell me the difference between Kadavur and Chennai?

Tamilini: Kadavur is a village. Chennai is a city.

Teacher: Can you tell what were the earliest planned cities of ancient India?

Teacher: Yes. Very good children. Today we are going to study about the ancient towns of Tamilagam. They are Poompuhar, Madurai, Kanchi. Shall we start?

Teacher: See we have started today’s lesson with Tamilini’s birthday.

Teacher: Like Harappa and Mohenjo-Daro in ancient India, there were famous towns in ancient Tamilagam too. Madurai, Kanchi and Poompuhar are prominent among them.

Tamil literature, accounts of foreign travellers and archaeological finds provide us information about the ancient towns of Tamilagam.

Poompuhar is one of the oldest towns in ancient Tamilagam. This is the place where well known characters of Silapathikaram, Kovalan and Kannagi lived. It was also a port town along the Bay of Bengal. The ports were established for facilitating maritime trade. Even in times past, countries began to export their surplus products and import the scarce commodities by sea. Poompuhar is one such historic port that emerged in the wake of increasing maritime trade. It is a coastal town near the present-day Mayiladuthurai and is located where the river Cauvery drains into the sea.

Poompuhar was also known by names such as Puhar and Kaveripoompattinam. It served as the port of the early Chola kingdom. One of the popular Sangam Literature. Pattinappaalai and Tamil epics, Silappathikaram and Manimegalai, have references to the brisk sea-borne trade that took place in the port city, Puhar.

Silappathikaram, in particular, speaks about the greatness of Poompuhar. The lead female character of Silappathikaram is Kannagi. 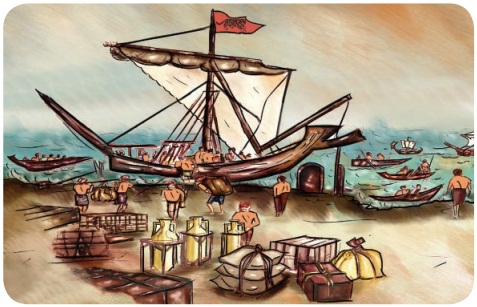 Numerous merchants from foreign countries such as Greece and Rome landed at Poompuhar. Due to busy and continuous trade, many of them stayed on indefinitely in Poompuhar. There are evidences of foreigner settlements in the town. People speaking many languages inhabited Poompuhar in its glorious days. As loading and unloading of ships took some months, the foreign traders began to interact with the local people during that period. This enabled the natives to learn foreign languages for communication. Similarly, the foreigners also learnt Tamil to communicate with the natives. This contact facilitated not only exchange of goods but also languages and ideas resulting in cultural blending.

The traders of Poompuhar were known for their honesty and integrity. They sold goods at legitimate prices. Pattinappaalai states that “selling any commodity at a higher price was considered bad”.

The author of Pattinappaalai, Kadiyalur Uruttirangannanar, belonged to 2nd century BCE. This is indicative of Puhar’s antiquity. Horses were imported by sea. Pepper was procured through the land route. Gold that came from Vadamalai was polished and exported to the overseas countries. Sandal from Western Ghats, pearls from southern sea, corals from eastern sea and food items from Eelam were imported.

Poompuhar had been built differently from other towns. Each social group had a separate settlement. Streets were broad and straight, dotted with well-designed houses. There was also a dockyard.

Puhar was a busy port upto 200 CE. It might have been either washed away by sea or destroyed by big shore waves. The remains of that destruction can still be seen in the present Poompuhar town.

Madurai has been one of the oldest cities in India. Its antiquity can be understood from the sobriquet “Sangam Valartha Nagaram” it has earned.

Pandyas, the Cholas and later the Kalabras ruled Madurai in the ancient period. During medieval times, later Cholas and later Pandyas followed by the Nayaks ruled this historic town. This has resulted in cultural blending. Trade flourished and evidence for this has been unearthed in archaeological excavation done in Keezhadi near Madurai. 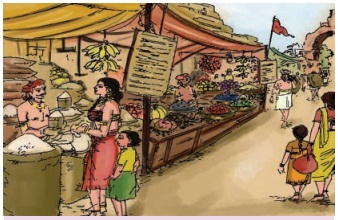 Madurai is known as Thoonga Nagaram (the city that never sleeps). Madurai was a safe place where women purchased things from Allangadi without any fear. 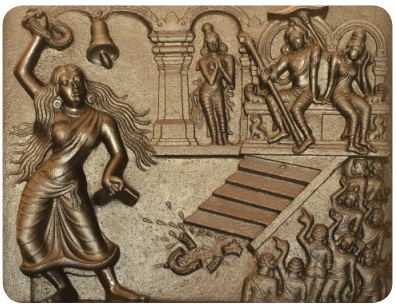 A mint of Roman coins was present at Madurai. The coins of other countries were also minted at Madurai, which is a proof for the glory of Madurai.

The fame of Madurai is attested by the accounts of the Greek historian Megasthanese. Chanakya, Chandragupta’s minister, makes a mention of Madurai in his book, Arthasastra.

In the moat around the town, tunnels had been constructed in such a way that even elephants could comfortably enter.

A place of learning is called school. Several schools were established in great numbers for the first time in Kancheepuram. Jains studied in Jainapalli, and Buddhists studied in Viharas.

The greatness of Kanchi as an educational centre can be understood from the fact that the Chinese traveller Hieun Tsang who studied at Nalanda University visited Kanchi ‘Kadigai’ to pursue his further studies. 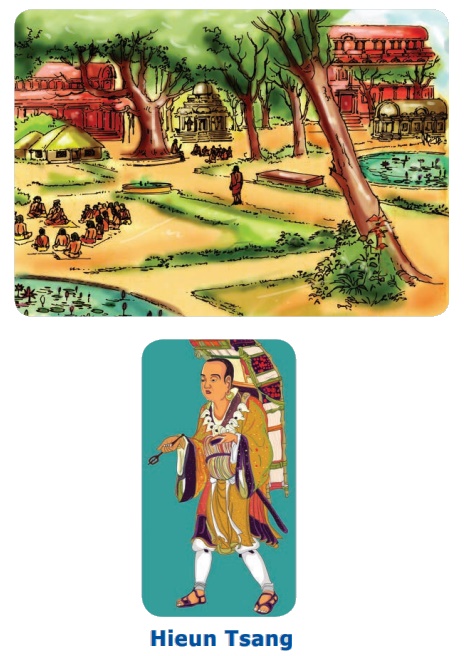 Hieun Tsang remarked that Kanchi can be counted as one among the seven sacred places like Budh Gaya and Sanchi. Kanchi is the oldest town in Thondai Nadu. Scholars like Dharmabalar, Jothibalar, Sumathi and Bodhi Dharmar were born in Kanchi.

Kanchii also known as the templetown. The famous temple of great architectural beauty, Kailasanathar temple, was built by later Pallava king Rajasimha at Kanchi. During the Pallava period, a large number of cave temples were built. The Buddhist monk Manimegalai spent the last part of her life at Kanchi speaks highly of that town.

Water management played an important role in the agrarian society of those times. Hundreds of lakes were created for storing water around the town of Kanchi. These lakes were well connected with canals. During the later period, Kanchi came to be known as the district of lakes. Water management skills of the ancient Tamils can be understood from the construction of Kallanai in the Chola country and the lakes and canals in Kanchi.

Apart from Poompuhar, Madurai and Kanchi, there were other towns too in ancient Tamilagam. Korkai, Vanchi, Thondi, Uraiyur, Musiri, Karuvur, Mamallapuram, Thanjai, Thagadoor and Kaayal are some of them. By conducting archaeological research, more information can be gathered about these places.

Thank you students. With this, we shall complete this lesson now.

Poompuhar was a port. Madurai was a trading town. Kanchi was an educational centre.

Tamil sayings represent the uniqueness of each ancient Tamil kingdom

* Madurai, Kanchi and Poompuhar are famous towns in ancient Tamilagam.

* We know about the life of the people of Poompuhar by reading Silappathikaram and Pattinappaalai.

* Madurai is associated with three sangams.

* Kanchi was an educational centre. Many great scholars were associated with it.

* Kanchi known as a city of temples, was also known for water management.

2. Foreigner - a person who comes from  another country

4.  Integrity - the quality of being  honest

6. Antiquity - a long time ago

9. Moat - a deep and wide trench filled with water surrounding a palace