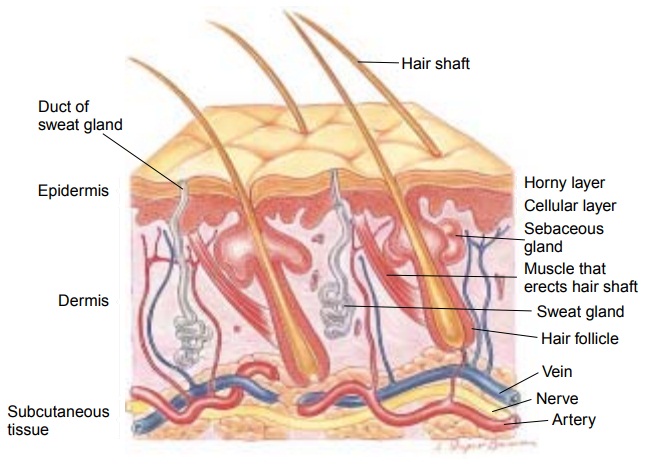 The skin is composed of three layers: epidermis, dermis, and subcutaneous tissue .

The largest organ system of the body, the skin is indispensable for human life. Skin forms a barrier between the internal organs and the external environment and participates in many vital body func-tions. The skin is contiguous with the mucous membrane at the ex-ternal openings of the digestive, respiratory, and urogenital systems. Because skin disorders are readily visible, dermatologic complaints are commonly the primary reason for a patient to seek health care.

The skin is composed of three layers: epidermis, dermis, and sub-cutaneous tissue (Fig. 55-1). The epidermis is an outermost layer of stratified epithelial cells and composed predominantly of kera-tinocytes. It ranges in thickness from about 0.1 mm on the eye-lids to about 1 mm on the palms of the hands and soles of the feet. Four distinct layers compose the epidermis, from innermost to outermost: stratum germinativum, stratum granulosum, stra-tum lucidum, and stratum corneum. Each layer becomes more differentiated (ie, mature and with more specific functions) as it rises from the basal stratum germinativum layer to the outermost stratum corneum layer. 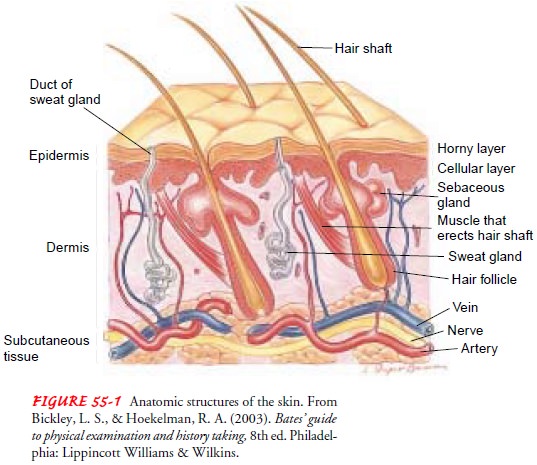 The epidermis, which is contiguous with the mucous membranes and the lining of the ear canals, consists of live, continuously di-viding cells covered on the surface by dead cells that were originally deeper in the dermis but were pushed upward by the newly developing, more differentiated cells underneath. This external layer is almost completely replaced every 3 to 4 weeks. The dead cells contain large amounts of keratin, an insoluble, fibrous pro-tein that forms the outer barrier of the skin and has the capacity to repel pathogens and prevent excessive fluid loss from the body. Keratin is the principal hardening ingredient of the hair and nails.

Melanocytes are the special cells of the epidermis that are pri-marily involved in producing the pigment melanin, which col-ors the skin and hair. The more melanin in the tissue, the darker is the color. Most of the skin of dark-skinned people and the darker areas of the skin on light-skinned people (eg, the nipple) contain larger amounts of this pigment. Normal skin color de-pends on race and varies from pale; almost ivory, to deep brown, almost pure black. Systemic disease affects skin color as well. For example, the skin appears bluish when there is insufficient oxy-genation of the blood, yellow-green in people with jaundice, or red or flushed when there is inflammation or fever (Table 55-1).

Production of melanin is controlled by a hormone secreted from the hypothalamus of the brain called melanocyte-stimulatinghormone. It is believed that melanin can absorb ultraviolet lightin sunlight.

Two other cells are common to the epidermis: Merkel and Langerhans cells. Merkel cells are receptors that transmit stimuli to the axon through a chemical synapse. Langerhans cells are be-lieved to play a significant role in cutaneous immune system re-actions. These accessory cells of the afferent immune system process invading antigens and transport the antigens to the lymph system to activate the T lymphocytes.

The epidermis is modified in different areas of the body. It is thickest over the palms of the hands and soles of the feet and con-tains increased amounts of keratin. The thickness of the epider-mis can increase with use and can result in calluses forming on the hands or corns forming on the feet.

The junction of the epidermis and dermis is an area of many undulations and furrows called rete ridges. This junction an-chors the epidermis to the dermis and permits the free exchange of essential nutrients between the two layers. This interlocking between the dermis and epidermis produces ripples on the sur-face of the skin. On the fingertips, these ripples are called finger-prints. They are a person’s most individual characteristic, andthey rarely change

The dermis makes up the largest portion of the skin, providing strength and structure. It is composed of two layers: papillary and reticular. The papillary dermis lies directly beneath the epidermis and is composed primarily of fibroblast cells capable of produc-ing one form of collagen, a component of connective tissue. The reticular layer lies beneath the papillary layer and also produces collagen and elastic bundles. The dermis is also made up of blood and lymph vessels, nerves, sweat and sebaceous glands, and hair roots. The dermis is often referred to as the “true skin.”

The subcutaneous tissue, or hypodermis, is the innermost layer of the skin. It is primarily adipose tissue, which provides a cush-ion between the skin layers, muscles, and bones. It promotes skin mobility, molds body contours, and insulates the body. Fat is de-posited and distributed according to the person’s gender and in part accounts for the difference in body shape between men and women. Overeating results in increased deposition of fat beneath the skin. The subcutaneous tissues and amount of fat deposited are important factors in body temperature regulation.

An outgrowth of the skin, hair is present over the entire body ex-cept for the palms and soles. The hair consists of a root formed in the dermis and a hair shaft that projects beyond the skin. It grows in a cavity called a hair follicle. Proliferation of cells in the bulb of the hair causes the hair to form (see Fig. 55-1).

Hair follicles undergo cycles of growth and rest. The rate of growth varies; beard growth is the most rapid, followed by hair on the scalp, axillae, thighs, and eyebrows. The growth or anagenphase may last up to 6 years for scalp hair, whereas the telogen orresting phase lasts for approximately 4 months. During telogen, hair sheds from the body. The hair follicle recycles into the grow-ing phase spontaneously, or it can be induced by plucking out hairs. Growing and resting hair can be found side by side on all parts of the body. About 90% of the 100,000 hair follicles on a normal scalp are in the growing phase at any one time, and 50 to 100 scalp hairs are shed each day.

There is a small bulge on the side of the hair follicle that houses the stem cells that migrate down to the follicle root and begin the cycle of reproducing the hair shaft. It was discovered that these bulges also contain the stem cells that migrate upward to reproduce skin (Jaworski & Gilliam, 1999). The location of these cells on the side of the hair shaft rather than at the base is a fac-tor in hair loss. In conditions in which inflammation causes dam-age to the root of the hair, regrowth is possible. However, if inflammation causes damage to the bulge on the side, stem cells are destroyed and hair does not grow.

In certain locations on the body, hair growth is controlled by sex hormones. The most vivid example is the growth of hair on the face (ie, beard and mustache), chest, and back, which is con-trolled by the male hormones known as androgens. Some women with higher levels of testosterone have hair in the areas generally thought of as masculine, such as the face, chest, and lower ab-domen. This is often a normal genetic variation; if it appears along with irregular menses and weight changes it may indicate a hormonal imbalance.

Hair in different parts of the body serves different functions. The hairs of the eyes (ie, eyebrows and lashes), nose, and ears filter out dust, bugs, and airborne debris. The hair of the skin provides thermal insulation in lower animals. This function is en-hanced during cold or fright by piloerection (ie, hairs standing on end), caused by contraction of the tiny erector muscles attached to the hair follicle. The piloerector response that occurs in humans is probably vestigial (ie, rudimentary).

Hair color is supplied by various amounts of melanin within the hair shaft. Gray or white hair reflects the loss of pigment. Hair quantity and distribution can be affected by endocrine conditions. For example, Cushing’s syndrome causes hirsutism (ie, excessive hair growth, especially in women), and hypothyroid-ism (ie, underactive thyroid) causes changes in hair texture. In many cases, chemotherapy and radiation therapy cause hair thin-ning or weakening of the hair shaft, resulting in partial or com-plete alopecia (ie, hair loss) from the scalp and other parts of the body.

Nail growth is continuous throughout life, with an average growth of 0.1 mm daily. Growth is faster in fingernails than toe-nails and tends to slow with aging. Complete renewal of a fin-gernail takes about 170 days, whereas toenail renewal takes 12 to 18 months.

Glands of the Skin

Sweat glands are found in the skin over most of the body sur-face. They are heavily concentrated in the palms of the hands and soles of the feet. Only the glans penis, the margins of the lips, the external ear, and the nail bed are devoid of sweat glands. Sweat glands are subclassified into two categories: eccrine and apocrine.

The eccrine sweat glands are found in all areas of the skin. Their ducts open directly onto the skin surface. The thin, watery secretion called sweat is produced in the basal coiled portion of the eccrine gland and is released into its narrow duct. Sweat is composed of predominantly water and contains about one half of the salt content of the blood plasma. Sweat is released from ec-crine glands in response to elevated ambient temperature and el-evated body temperature. The rate of sweat secretion is under the control of the sympathetic nervous system. Excessive sweating of the palms and soles, axillae, forehead, and other areas may occur in response to pain and stress.