An Overview of XForms

An Overview of XForms

One of the primary uses of the Web by businesses is to gather data from the visitors to their Web sites. Forms provide a powerful mechanism for users to interact with Web sites. HTML forms, and more recently XHTML forms, have been used for this purpose. Currently, the W3C organization is working on the next generation of Web forms: XForms. On August 28, 2001 the XForms 1.0 working draft was released.

Even though XForms is only a working draft at this point, it is important to at least get a good general understanding of XForms. XForms is going to be one of the vital technolo-gies that drives the Web in the future.

Forms were first introduced to the Web in 1993. Since then, forms have grown to be a vital part of the user interaction with Web sites. More recently, HTML forms developers have been able to start restructuring their forms to be XHTML compliant. This makes forms XML 1.0 compatible; however, this does not really change any of the shortcom-ings of old HTML forms. HTML forms fail to provide any separation of presentation from data and logic. There are very limited facilities in HTML forms (short of doing a bunch of script programming, which is not even supported in all browsers) for tracking user input during form filling. XForms is being designed to solve these problems.

Next Generation of Web Forms

XForms provides the next logical step in the evolvement of forms on the Web. The XML standard dictates that structure be separated from presentation. XForms as an XML application accomplishes this.

As stated, XForms is being designed to be the successor to HTML forms. Let’s take a quick look at Listing 11.22, which shows a typical HTML form.

You can see that this is a regular HTML form typical of what you will find on most Web sites. Presentation of the form is combined with the purpose of the form. Additionally, there is no control over the data entered by the user prior to form submission. Figure 11.6 demonstrates how this form would be rendered in Internet Explorer 5.5. 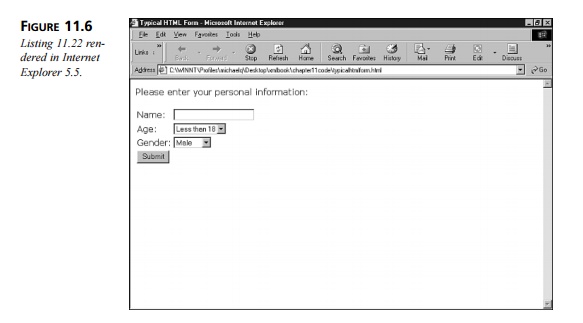 In XForms, there are separate sections used to describe the purpose of the form and the presentation of the form. This provides a great advantage over HTML because XForms makes no requirement of how the form should be presented. This makes XForms very rich and flexible. XForms may just as easily be displayed using XHTML form controls as WML form controls. This is because XForms does not predetermine the type of con-trol that must be used to collect the data. XForms merely dictates the type of data that should be collected. Listing 11.23 shows how the form in Listing 11.22 would be rewrit-ten using XForms.

You can immediately see in this listing that the user interface is not hard-coded to use select boxes and text boxes, as is the case in the HTML form in Listing 11.22. The list-ing merely specifies that the data that should be gathered. Different clients can render the interface as appropriate. The id and name attributes have been replaced by the ref attribute, which is an XML ID type of attribute that uniquely identifies the XForms control.

Several other things should be noted about Listing 11.23. There is no form element. This is not required in XForms. Also, when the form is submitted, the data will be submitted as XML data. Data entered in this XForms form by a user might look like what appears in Listing 11.24.

XForms submits well-formed XML data. Once this data is received by the server, it may be validated against a DTD by an XML parser.

XForms is, of course, an XML technology. This opens up XForms to using all the differ-ent permutations of XML on the Web, such as XHTML, WML, and XSL. It appears that XSL is going to be very important in relation to XForms. As stated, the XForms working draft makes no requirements for how forms should be presented. XSL will be able to be used to transform XForms documents to meet the presentation requirements of any clients using the form.

XForms is platform neutral. As an XML technology, no specific requirements are made in order to use XForms. XForms may be formatted for display as easily for handheld devices, as for cellular phones, and as for desktop computers (within reason, of course; the display limitations of some devices would have to be taken into account).

XForms may be displayed using XHTML. As a matter of fact, the W3C is working on a DTD that combines XHTML 1.1 with XForms. Once integrated, XForms will not only provide complete separation of purpose and presentation but will be completely modular-ized. At the time of this writing, the DTD has not been completed.

XForms forms technology is split into three layers. These layers are purpose, presenta-tion, and data. We will now look at each of these layers and see how they relate to the overall design goals of XForms.

As has been stated several times previously, the purpose of the form and the presentation of the form are separated in XForms. But what does this actually mean? As you saw in Listing 11.22, the purpose and the presentation were combined in the HTML form. In that listing, HTML form elements were hard-coded into the page. The presentation was predetermined for any clients loading the page. When viewing Listing 11.23, you quickly see that there is no defined presentation. The actual main form elements, referenced from the XForms namespace, are input and selectOne. Both of these elements make their purpose very clear. The input element expects some input from the user, and selectOne allows the user to choose one of several defined options (the choices child element con-tains the options available). However, although the purpose of the form is clear, there is no indication of how the form should be displayed. It is left totally to the client to config-ure the presentation.

It might seem odd to say that there is a data layer. The data is entered into the form fields that are rendered by the client device. It would seem that data should be part of the pre-sentation layer, or it might seem appropriate to make data part of the purpose layer because the purpose layer defines the type of data being gathered. However, there is indeed a data layer to XForms. You see, although data might be entered into the form fields, there is another part of the XForms document that is actually tracking this data as it is being entered: the data layer. There is actually an XForms construct placed within the head element of the XForms document. Listing 11.25 shows what the data layer might look like for the XForms form from Listing 11.23.

Three elements in this listing have names that match the values of the ref attributes of the form elements defined in Listing 11.23. These elements serve as placeholders for the values entered into the form elements. These elements are wrapped inside of the wrapper element personalinfo. The wrapper element may be of the author’s choosing. It is these placeholders that give us the ability to perform instance tracking of the values users input while filling out the form. This is the next factor that makes XForms superior to HTML forms. We will now take a look at instance data tracking.

Instance data tracking gives the XForms author greater control over user input. As stated previously, data submitted by an end user via an XForms document could be validated against a DTD on the server. Using instance data tracking, it’s even possible to validate user input during form entry—prior to form submission. Sure, this type of validation is available in HTML if you want to write a bunch of JavaScript to track user entries, but then you have to rewrite the JavaScript to achieve compatibility for each of the Web browsers used to visit your Web site. No extra code is needed to write with XForms. This will be a feature included with the XForms parser.

Listing 11.26 is not a complete document. It only includes the declaration statements, the head element and its contents, and the root element, html. In the html element, three namespace are referenced. The first two are for the XHTML and XForms namespaces. The third is the namespace for placeholder elements. The namespace is referenced by attaching the prefix “info:” to the wrapper element, personalinfo, and to the place-holder elements, txtName, cboAge, and cboGender.

Now we are ready to start tracking partial form filling. We just need to connect the actual form elements to the placeholder elements.

Listing 11.27 is very similar to Listing 11.23. However, there is one major difference: The value of the ref attribute for each form element has been updated to point to a placeholder element.

Now the form elements are connected with the placeholder elements. During the form-filling process, prior to form submission, the XForms parser will have access to the val-ues that the end user is entering into the form elements.

In Listing 11.27, XPath statements were used as the values of the ref attributes to con-nect the form elements with the placeholder elements. This is another example of how using XForms, an XML application, will enable us to incorporate more XML technolo-gies to complete our tasks.

XForms adopts the XML Schema data typing system. This enables the author to specify the type of data that is expected to be entered into the form fields. From this, the XForms parser can be used to enforce the proper data typing. A very simple example of how validation and data typing can be used is demonstrated in Listing 11.28.

The XForms bind element is used to indicate that each of the form elements is required and that the data type will be a character string. The ref attribute, once again, has its value set to an XPath expression that points to the placeholder elements in the data layer. Now the XForms parser can make sure that the required elements are present and that the proper data types are entered.

In this listing, a new attribute, xform, has been added to the XForms input element and submit element. The xform attribute is an IDREF that references the ID attribute for an xform element defined elsewhere in the document. This establishes a clear relationship between the form elements and the xform element in a multiple-form document.