Individuals who harbor E. histolytica are usually clinically well. In most cases, particularly in the temperate zones, the organism is avirulent, living in the bowel as a normal commen-sal inhabitant.

Individuals who harbor E. histolytica are usually clinically well. In most cases, particularly in the temperate zones, the organism is avirulent, living in the bowel as a normal commen-sal inhabitant. Spontaneous disappearance of amebas, over a period of weeks to months, among such patients is common and perhaps universal. Serologic data, however, suggest that some asymptomatic carriers possess virulent strains and incur minimal tissue invasion. In this population, the infection may eventually progress to produce overt disease.

Diarrhea, flatulence, and cramping abdominal pain are the most frequent complaints of symptomatic patients. The diarrhea is intermittent, alternating with episodes of normal-ity or constipation over a period of months to years. Typically, the stool consists of one to four loose to watery, foul-smelling passages that contain mucus and blood. Physical find-ings are limited to abdominal tenderness localized to the hepatic, ascending colonic, and cecal areas. Sigmoidoscopy reveals the typical ulcerations with normal intertwining mucosa.

Fulminating amebic dysentery is less common. It may occur spontaneously in debili-tated or pregnant individuals or be precipitated by corticosteroid therapy. Its onset is often abrupt, with high fever, severe abdominal cramps, and profuse diarrhea. Most commonly, abscesses occur singly and are localized to the upper outer quadrant of the right lobe of the liver. This localization results in the development of point tenderness overlying the cavity and elevation of the right diaphragm. Liver function is usually well preserved. Isotopic or ultrasound scanning confirms the presence of the lesion. Needle aspiration re-sults in the withdrawal of reddish-brown, odorless fluid free of bacteria and polymor-phonuclear leukocytes; trophozoites may be demonstrated in the terminal portion of the aspirate.

Approximately 5% of all patients with symptomatic amebiasis present with a liver ab-scess. Ironically, fewer than one half can recall significant diarrheal illness. AlthoughE.histolytica can be demonstrated in the stools of 72% of patients with amebic liver abscesswhen a combination of serial microscopic examinations and culture is used, routine mi-croscopic examination of the stool detects less than half of these. Complications relate to the extension of the abscess into surrounding tissue, producing pneumonia, empyema, or peritonitis. Extension of an abscess from the left lobe of the liver to the pericardium is the single most dangerous complication. It may produce rapid cardiac compression (tampon-ade) and death or, more commonly, a chronic pericardial disease that may be confused with congestive cardiomyopathy or tuberculous pericarditis.

The microscopic diagnosis of intestinal amebiasis depends on the identification of the or-ganism in stool or sigmoidoscopic aspirates. Because trophozoites appear predominantly in liquid stools or aspirates, a portion of such specimens should be fixed immediately to ensure preservation of these fragile organisms for stained preparations. The specimen may then be examined in wet mount for typical motility, concentrated to detect cysts, and stained for definitive identification. If trophozoites or cysts are seen, they must be care-fully differentiated from those of the commensal parasites, particularly E. hartmanni and E. coli (see Table 53–1). E. histolyticatrophozoites can be differentiated from those of E. dispar only by the presence of ingested erythrocytes in the former; the cysts appearidentical. 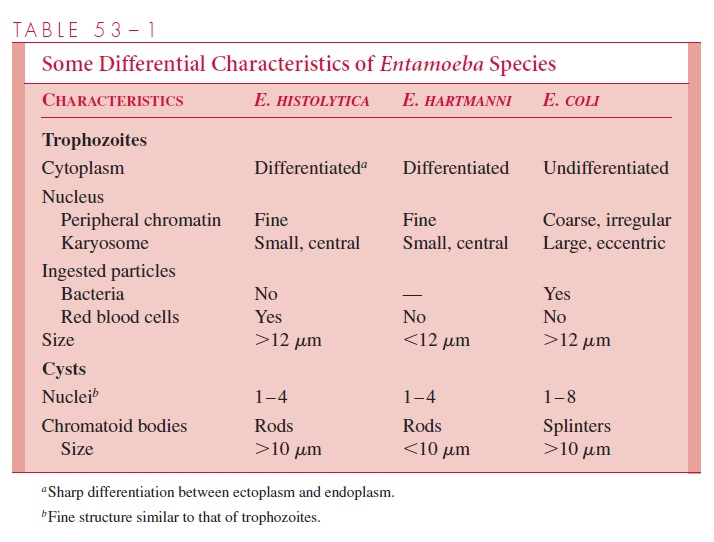 Recently, sensitive and specific stool antigen tests for E. histolytica have become commercially available; their value in the clinical diagnosis of amebiasis, when compared to microscopic examination, is now clear. Although cultural and polymerase chain reac-tion techniques are somewhat more sensitive, they are not widely available in most clini-cal laboratories.

The diagnosis of extraintestinal amebiasis is more difficult, because the parasite usu-ally cannot be recovered from stool or tissue. Serologic tests are therefore of paramount importance. Typically, results are negative in asymptomatic patients, suggesting that tis-sue invasion is required for antibody production. Most patients with symptomatic intesti-nal disease and more than 90% with hepatic abscess have high levels of antiamebic antibodies. Unfortunately, these titers may persist for months to years after an acute in-fection, making the interpretation of a positive test difficult in endemic areas. At present, the indirect hemagglutination test and enzyme immunoassays using antigens derived from axenically grown organisms appear to be the most sensitive. Several rapid tests, including latex agglutination, agar diffusion, and counterimmunoelectrophoresis, are available to smaller laboratories.

Treatment is directed toward relief of symptoms, blood and fluid replacement, and eradi-cation of the organism. The need to eliminate the parasite in asymptomatic carriers re-mains uncertain. The drug of choice for eradication is metronidazole. It is effective against all forms of amebiasis, but should be combined with a second agent, such as diloxanide, to improve cure rates in intestinal disease and diminish the chance of recru-descent disease in hepatic amebiasis.

Because the disease is transmitted by the fecal–oral route, efforts should be directed to-ward sanitary disposal of human feces and improvement in personal hygienic practices. In the United States, this applies particularly to institutionalized patients and to camps for migrant farm workers. Male homosexuals should be made aware that certain sexual prac-tices substantially increase their risk of amebiasis and other infections.