1. It may increase the arc voltage by cooling the arc plasma. As the temperature of arc plasma is decreased, the mobility of the particle in arc plasma is reduced, hence more voltage gradient is required to maintain the arc.

3. Splitting up the arc into a number of series arcs also increases the arc voltage.

The first objective is usually achieved by forcing the arc into contact with as large an area as possible of insulating material. Every air circuit breaker is fitted with a chamber surrounding the contact. This chamber is called „arc chute‟. The arc is driven into it. If inside of the arc chute is suitably shaped, and if the arc can conform to the shape, the arc chute wall will help to achieve cooling. This type of arc chute should be made from some kind of refractory material

The third objective is achieved by using metal arc slitter inside the arc chute. The main arc chute is divided into numbers of small compartments by using metallic separation plates. These metallic separation plates are actually the arc splitters and each of the small compartments behaves as individual mini arc chute. In this system the initial arc is split into a number of series arcs, each of which will have its own mini arc chute. 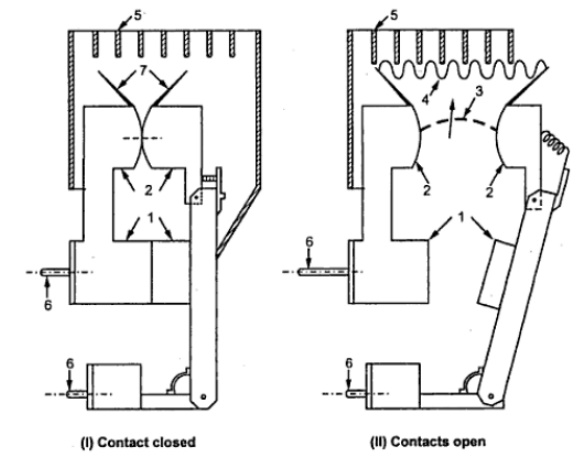 3. Arc rifling in the direction of the arrow

In the air reservoir there is a high pressure air stored between 20 to 30 kg/cm2. And that air is taken from compressed air system. On the reservoir there are three hollow insulator columns mounted with valves at their base. On the top of the hollow insulator chambers there are double arc extinguishing chambers mounted. The current carrying parts connect the three arc extinction chambers to each other in series and the pole to the neighboring equipment, since there exist a very high voltage between the conductor and the air reservoir, the entire arc extinction chamber assembly is mounted on insulators. Since there are three double arc extinction poles in series, there are six breakers per pole. Each arc extinction chamber consists of one twin fixed contact. There are two moving contacts. The moving contacts can move axially so as to open or close. Its opening or closing mechanism depends on spring pressure and air pressure.

The contacts travel through a short distance against the spring pressure. At the end of contacts travel the part for outgoing air is closed by the moving contacts and the entire arc extinction chamber is filled with high pressure air, as the air is not allowed to go out. However, during the arcing period the air goes out through the openings and takes away the ionized air While closing, the valve is turned so as to close connection between the hollow of the insulator and the reservoir.

The valve lets the air from the hollow insulator to the atmosphere. As a result the pressure of air in the arc extinction chamber is dropped down to the atmospheric pressure and the moving contacts close over the fixed contacts by virtue of the spring pressure, the opening is fast because the air takes a negligible time to travel from the reservoir to the moving contact. The arc is extinguished within a cycle. Therefore, air blast circuit breaker is very fast in breaking the current. Closing is also fast because the pressure in the arc extinction chamber drops immediately as the value operates and the contacts close by virtue of the spring pressure.

·                    The growth of dielectric strength is so rapid that final contact gap needed for arc extinction is very small, this reduces the size of device.

·                    Due to lesser arc energy, air blast circuit breakers are very suitable for conditions where frequent operation is required.

·                    The arcing products are completely removed by the blast whereas the oil deteriorates with successive operations; the expense of regular oil is replacement is avoided.

·                    The energy supplied for arc extinction is obtained from high pressure air and is independent of the current to be interrupted.

·                    The arcing time is very small due to the rapid buildup of dielectric strength between contacts. Therefore, the arc energy is only a fraction that in oil circuit breakers, thus resulting in less burning of contacts.